Işık calls on autoworkers to return to production 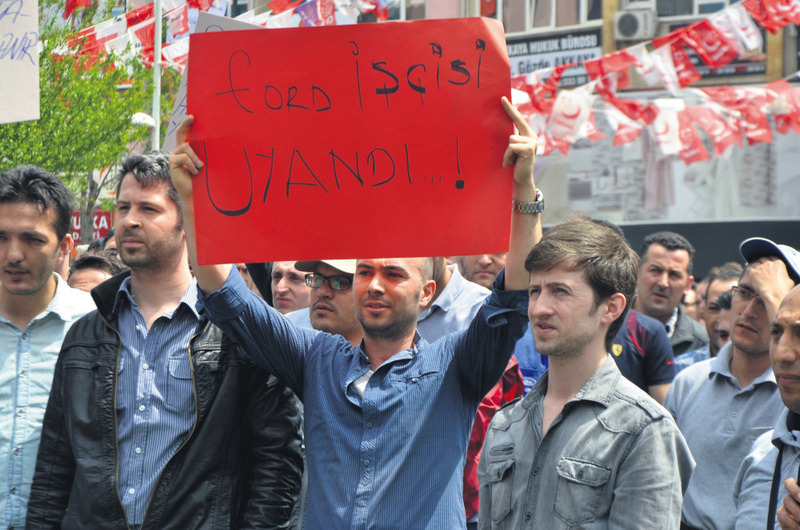 It has been a week since the beginning of the first strike in an automotive production plant, which has been followed by five others with while two companies convincing their workers to return to work. Işık has called on others to end the strikes

Science, Technology and Industry Minister Fikri Işık has called on thousands of autoworkers on Thursday to end their industrial action in order to prevent negative effects on the auto industry, which he described as one of the country's most powerful sectors. Speaking on the first day of the Istanbul Autoshow 2015, Işık said that demands and expectations between employee and employers can be negotiated while production is going on. "My call is for autoworkers' production to restart as soon as possible," Işık told reporters.

The first strike has begun in the northwestern city of Bursa, the Turkish auto industry hub, at French carmaker Renault's plant last week. Around 2,500 workers went on strike to force an increase in their wages as well as better employment conditions. In support of the Renault workers, 350 workers from Tofaş, a joint venture of Turkey's top industrial conglomerate Koç Holding and FIAT, have gone on strike. Workers from four car-parts plants located in Bursa, Turkish Mako and Ototrim, French Valeo and U.K.-based Delphi, have also joined the strike. The number of workers on strike has exceeded 15,000. Production has halted in the aforementioned plants.

The strikes have affected the sector and Turkey's second largest exporter. Ford Otosan announced on Wednesday that they have halted production as it has become impossible to continue producing without receiving the necessary spare parts. Ford's decision was reported as a preemptive move, as its workers are also on the verge of striking. Around 500 workers gathered in front of the Gölcük plant on Wednesday, voicing their demands and expressing their support for the workers on strike.

Workers are angry over salaries and want the abolition of their trade union representation, the Turkish Metal Industries Employers' Association. Describing the incidents as a reaction against the union, Işık claimed that the labor body was not party to the dispute.

Işık claimed the strike would hit Turkey's production and exports, saying it would create a risk of global players turning to other countries for production. "This will cause a decrease in production, a loss in employment and exports. It will also bring a disadvantage to the auto sector," said the minister.

Turkey, which ranks 17th in the global automobile production market, manufactured one out of every 77 motor vehicles in the world in 2014, according to figures from the International Organization of Motor Vehicle Manufacturers. The country manufactured 1.17 million cars last year, an increase of 45,000 from 2013. Over 250 companies work in the sector in Turkey, according to the country's Economy Ministry.

Earlier, Işık reiterated the importance of Turkey producing its own auto brand. "Our target is for Turkey to produce a brand of range-extended electric cars. We've made important work on this. We will continue doing it." Işık did not give any details about when production would start. Creating a national car brand in Turkey was first announced in 2011 and attracted the attention of many national and international companies. Stating that they are making important investments in research and development in the auto sector he said, "We plan to start construction on an automotive center of excellence at the start of 2016."

Automotive associations point to the damage and invite workers back

The press release said that the current situation faced in the automotive industry has reached a level where it is more damaging than beneficial for both sides, and in order for the automobile sector to contribute to the Turkish economy, there no more time to lose. It also invited workers to put an end to the strike and accept the employers' invitation.

Some autoworkers return to work amid strikes

Staff at a Turkish automobile suppliers have returned to work amid a major five-day wildcat strike that has hit the country's auto industry. Strike action over pay saw thousands of autoworkers at different companies down tools from Friday, May 15. Thousands of other workers remain on the picket line. It was announced yesterday that employees at Coşkunöz in the western province of Bursa had returned to work after talks between workers and management. No details have been given to the press. Ford Otosan workers have also ended the two-day strike yesterday.

Renault could reconsider Turkey investment amid instability from strike

Renault could reconsider investment in Turkey after a labour dispute stopped production at its Turkish joint venture Oyak Renault, the French car maker's head of Eurasia said yesterday. Renault's Jean Christophe Kugler told reporters that Turkey was a high-potential market that Renault had bet on for the long term, and the dispute was a threat not only to Turkey, a major automotive parts producer, but also to the global industry.
Last Update: May 21, 2015 8:57 pm
RELATED TOPICS