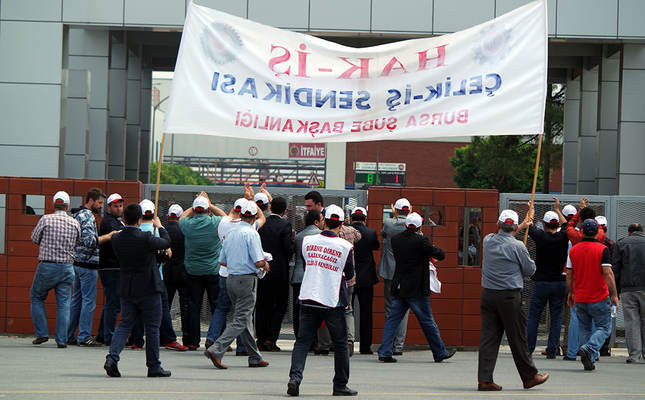 | AA Photo
by Daily Sabah with IHA Jun 09, 2015 12:00 am
Tofaş's automobile factory has halted production once again due to a workers strike. During the evening shift on Monday night, factory management laid off two workers claiming they were the ringleaders of the tensions that arose last month. When workers arrived at the factory yesterday to begin their 6:45 a.m. shift, they initiated another strike after hearing the news.

The workers had stopped production at the Tofaş factory to protest the Turkish Metal Union about a month ago, but resumed production after they reached an agreement with the factory management to improve working conditions, increase workers' pay and call on the union to resign. After the improvements and payments were made, production was resumed at the factory after 10 days.

According to data released by the Turkish Exporters' Assembly (TİM), Turkey's exports decreased 19 percent to $10.8 billion in May 2015 compared to May 2014. The decrease in the amount of exports has largely been affected by the automotive workers' strike that contributed a four-point decrease in total exports.