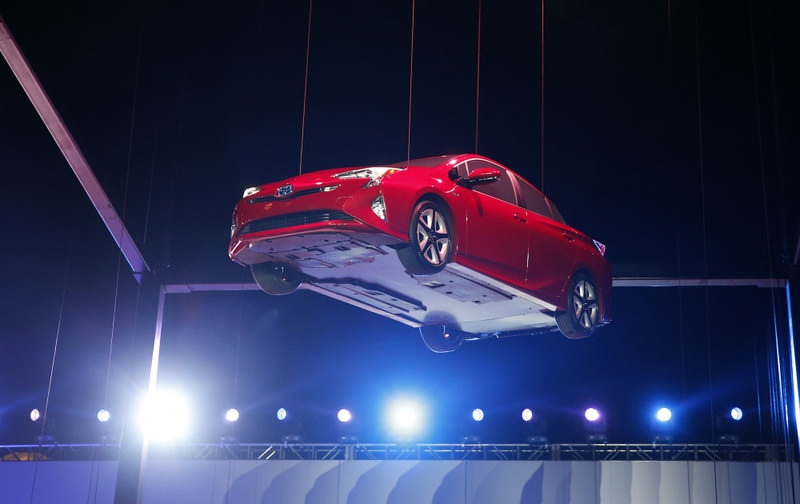 by Associated Press Sep 10, 2015 12:00 am
The rollout of Toyota's new Prius comes at an inauspicious time for gas-sipping vehicles. The Japanese automaker unveiled a sleeker version of the car that runs on gas and electricity at a glitzy event Tuesday night in Las Vegas. But gas prices nationwide were at $2.39 per gallon Thursday, the lowest level in since 2004, and analysts expect more declines now that summer driving season has ended. South Carolina prices are under $2 per gallon according to AAA, and four other states were at $2.10 or lower.

The 2016 Prius is more sculpted and sportier looking than the current version as Toyota tries to move the car from appealing mainly to environmentalists to more of a mainstream vehicle. The company says it will get about 55 mpg in combined city and highway driving, about 10 percent better than the 2015 version. It's more than 2 inches longer than the current car, and it sits almost an inch lower. The fourth-generation Prius' new underpinnings, including a new suspension, will give it a lower center of gravity for crisper handling than the current Prius, plus a smoother ride.

"What once was a rational purchase that for many customers focused on fuel economy is now so much more," said Bill Fay, general manager of the Toyota Division in the U.S. Tom Libby, manager of industry analysis for the IHS Automotive consulting firm, said the Prius brand name is so familiar now that the car no longer has to look different for the environmentally conscious to make a statement that they're driving a hybrid. The new styling, he said, will help it appeal to more people.

The launch timing is unfortunate for Toyota, which had been planning the new Prius for several years and didn't know that gas prices would be so low at this time, Libby said. "At some point gas prices will go up and fuel economy will rise on people's priority lists, and they'll be right there with that product," he said.

U.S. Prius sales peaked at nearly 237,000 in 2012 with the introduction of wagon and compact models. Gasoline averaged $3.63 per gallon that year, the most expensive year on record. But since then, Prius sales have fallen to just over 207,000 last year. Through August sales are down 17 percent from a year earlier.

Sales of hybrid and electric cars generally fall when gasoline prices are low, but the drop during the past two years has been amplified by a global shift to small and large SUVs.

Gas-powered SUVs have become more efficient, with many smaller ones getting more than 30 miles per gallon on the highway. Buyers like the high seating position and gear-hauling capability of the SUVs, which range in size from the small Honda HR-V to larger vehicles like the Chevrolet Suburban.

The Prius, first introduced in the U.S. in 2000, will have the best fuel economy for vehicles that aren't plugged in for recharging, the company said. An Eco model, to be introduced later, will get even better mileage.

Toyota also upgraded the interior. It also gets a more rigid structure to protect people in a crash, and it will offer a safety package that features pedestrian detection and automatic, pre-collision braking. The new Prius arrives in dealerships early next year. The price wasn't announced, but the current version starts at $24,200 excluding shipping.
RELATED TOPICS