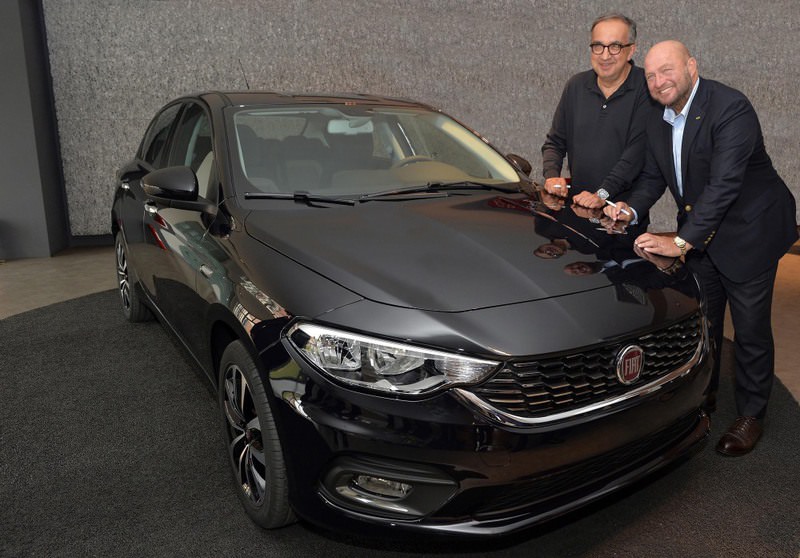 Marchionne praised TOFAŞ employees who are working on the Aegea project and said this new model is the outcome of TOFAŞ's advanced production and development skills.

Marchionne later tested the Aegea along with Mustafa Koç, the chairman of Koç Holding, Turkey's largest conglomerate, which operates TOFAŞ as a joint venture with Fiat. Koç said he is proud of the current status of the project.

A total of $1 billion has been invested into the Aegea project, which was designed at the FCA Design Center in Italy and developed by more than 2,000 engineers and three years of work at TOFAŞ's research and development division in Turkey. TOFAŞ accounted for $520 million of the money invested for the development of the project.

Named after the Aegean Sea, the Aegea will only be produced in Turkey and will be exported to 40 countries. As part of the project, 1.28 million vehicles are expected to be produced at the TOFAŞ facilities in Bursa, of which 790,000 will be exported and generate $10 billion in export revenue in eight years. A total of 580,000 vehicles will be made as compact sedans, while the remaining 700,000 vehicles will be produced as hatchbacks (HB) and station wagons (SW). The Aegea will hit the roads in November with its B and C segments with assertive prices and new properties.

The Aegea is expected to replace the Fiat Linea, which has been the best-selling car in Turkey for many years. With Aegea, Fiat also aims to grow in European markets in the compact sedan area where is has been relatively weaker than its competitors.

The Aegea's world premiere was at the 2015 Istanbul Auto Show in May with its compact sedan model. It received favorable opinions from visitors in terms of its design; however, it did not impress with its engine, as it continues to use the Fiat Linea engine. The remaining HB and SW models will be introduced along with sedan model at the 2016 International Geneva Motor Show.