20M cars on road as sales up with lower TL expectations 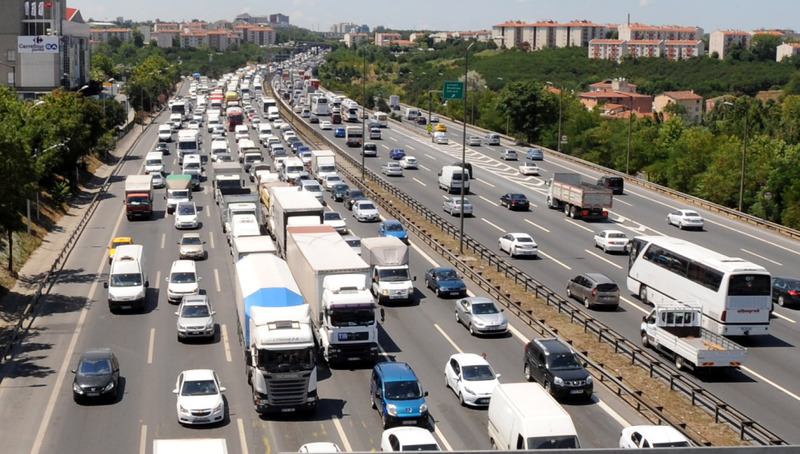 Despite Turkish lira losing its value against foreign currencies since 2014, vehicle sales and registrations continue to increase with consumers trying to avoid further slumps to the dollar and euro in the upcoming months

By the end of July the total number of road motor vehicles registered in Turkey reached 19,541,369, the Turkish Statistical Institute (TurkStat) reported Wednesday. Cars made up 52.7 percent of all registered motor vehicles, followed by small trucks with 16.3 percent, motorcycles with 14.9 percent, tractors with 8.5 percent, trucks with 4.1 percent, minibuses with 2.2 percent, buses with 1.1 percent and special purpose vehicles with 0.2 percent.

In July, 141,786 new vehicles were registered, with cars accounting for 61 percent, followed by motorcycles with 15.9 percent, small trucks with 14.1 percent and tractors with 3.5 percent. Minibuses, buses, trucks and special purpose vehicles constituted 5.5 percent of new registrations.

A recent report by the Automotive Distributors' Association of Turkey (ODD) stated that passenger car sales increased 43 percent and commercial vehicle sales increased 62 percent in the first eight months of 2015. Total sales jumped 47.18 percent in the same period, reaching 598,963. The ODD report noted expectations on the interest-rate increase by the U.S. Federal Reserve Bank (Fed), geopolitical developments, improvements in the current account deficit and approaching general election process as the main obstacles awaiting auto sales in the remaining four-month period for 2015. Many consumers shifted usual purchases at the end of the year to summer, while brands backed this trend through promotions.

The ODD report covering the January-August period stated that according to frame type, the most preferred body for cars was sedan with a 49.06 percent share, while vans had the highest share in commercial vehicles with 70.8 percent.

Despite the Turkish lira losing near 30 percent of its value since the beginning of 2015, 771,946 new vehicles were registered in the January-July period against 59,298 vehicles t6hat were unregistered. In the seven month period, vehicles on the road increased by 712,648. There have been 453,278 cars registered to traffic in the January-July period, with cars having an engine size between 1,501 to 1,600 cc capturing a 40.1 percent share. Due to heavy taxes, cars having an engine size bigger than 1,600 cc had a 5.1 percent share only. White was the most preferred color with 63.5 percent, reflecting consumer concerns for Turkey's active second-hand market.

In July, the number of road motor vehicle registrations increased 29.5 percent compared with the same month of the previous year.

Liquid Petroleum Gas (LPG) was the most preferred fuel type by Turkish consumers, being used in 40.7 percent of all 10.3 million registered cars by the end of July and reflecting expensive fuel prices in Turkey. Diesel cars had a 30.7 percent share, followed by gasoline with 28.1 percent.

Despite not operating a factory in Turkey and relying solely on import sales, German Volkswagen sold the most cars in July with 14.9 percent of new car purchases. Renault ranked second with 14.2 percent.
RELATED TOPICS