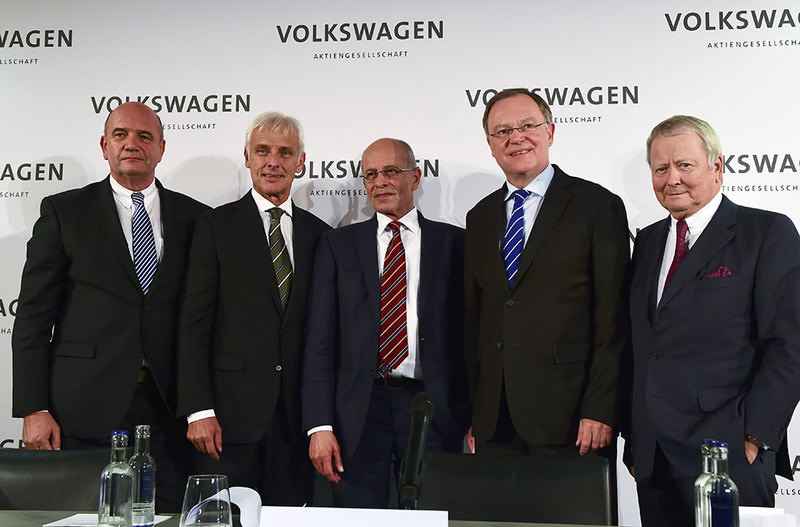 by French Press Agency - AFP Sep 26, 2015 12:00 am
Embattled car maker Volkswagen tapped Porsche chief Matthias Mueller Friday to steer it out of the wreckage of a widening scandal over pollution test rigging, as Washington said it would check all diesel cars for devices that fool emissions tests.

The 62-year-old Mueller replaces Martin Winterkorn, who was resigned over the stunning revelations by US environmental authorities that the German car maker had fitted some of its diesel cars with software capable of tricking environmental tests -- a scam that could lead to fines worth more than $18 billion (16.1 billion euros).

The scale of VW's deception became clear when the company admitted that 11 million of its diesel cars are equipped with so-called defeat devices that covertly turn off pollution controls when the car is being driven and back on when tests are being conducted.

Calling the cheating a "moral and policy disaster", the company's supervisory board chief Berthold Huber said the group is now looking to Mueller, who "knows the company and its brands", to tackle the crisis.

Board member Bernd Osterloh added that "a small group had caused great damage to Volkswagen".

Mueller himself vowed that his "most pressing task will be to restore confidence in the Volkswagen Group -- through an unsparing investigation and maximum transparency, but also by drawing the right lessons from the current situation".

"We will overcome this crisis," he said, adding that the car maker could "emerge stronger from the crisis in the long term" if it learned from its mistakes.

Mueller has a daunting task ahead given the global amplitude of the scandal.

Swiss authorities said late Friday that they have temporarily banned the sale of Volkswagen vehicles potentially fitted with the rigging software.

The ban came as authorities from India to Norway announced new probes, while the US environmental regulator said it would test all diesel car models.

"Today we are putting vehicle manufacturers on notice that our testing is going to include additional evaluation and tests designed to look for potential defeat devices," said Christopher Grundler, director of the US Environmental Protection Agency's Office of Transportation & Air Quality.

An hour before the group announced its new chief, VW shares closed 4.32 percent down Friday at 107.30 euros, after a rout this week in which a third of the company's market capitalization, or over 20 billion euros, was wiped off.

Mueller, born in Chemnitz in the former Communist East Germany, has been dubbed "the imperturbable" by newspaper Die Welt.

He has also been described as someone who knows how to use his elbows, "but I don't see it as playing foul, rather as a sign of perseverance and mettle", the daily quoted him as saying.

Winterkorn, who once famously said he knows "every screw in our cars", said he was "stunned that misconduct on such a scale was possible in the Volkswagen group".

The 68-year-old said he accepted responsibility as chief executive but was "not aware of any wrongdoing".

With the German car industry reeling, top-of-the-range automaker BMW suffered collateral damage on Thursday when its shares skidded after the weekly Auto Bild reported that emissions from one of its diesel models were 11 times higher than European Union norms.

While there was no indication that BMW had cheated in pollution tests, something the company strongly denied having done, the report nevertheless shook investors.

Daimler too issued a firm denial Friday that its vehicles were rigged, after an environmental group claimed that they too, were affected.
VW faces a growing list of legal tangles.

Norway and India have opened fraud probes, Australia said it was checking to see if it was affected, and Mexico was investigating whether 40,000 VW cars there comply with emissions rules.

France and Britain announced new checks and the European Union urged its 28 member states to investigate whether vehicles in their countries complied with pollution rules.

Private law firms are also lining up to take on the German company, with a class action suit already filed by a Seattle law firm.

VW has set aside 6.5 billion euros in provisions for the third quarter to cover the potential costs of the disclosures, while ratings agencies have warned they may cut Volkswagen's credit rating, which could increase the company's financing costs.

The company's two main joint ventures in China have said, however, that their products were not involved in the rigging scandal.