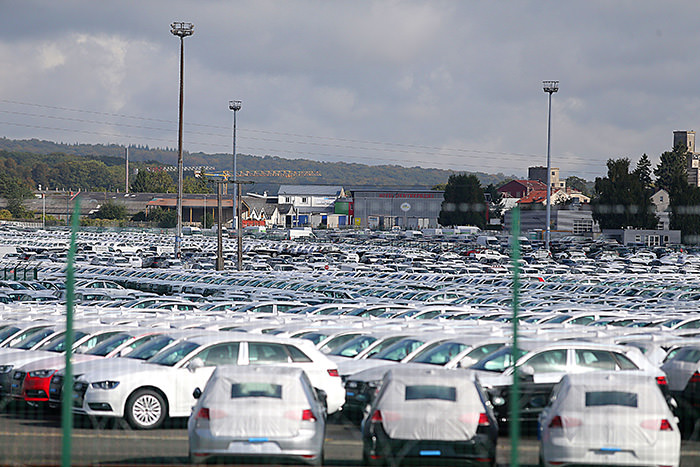 A picture taken on September 25, 2015 shows cars parked at the logistics park of German auto giant Volkswagen in Villers-Cotterets (AFP Photo)
by Compiled from Wire Services Sep 30, 2015 12:00 am
Nearly one million vehicles sold in France in recent years have been equipped with devices to cheat pollution tests, Volkswagen's French arm said Wednesday.

A total of 984,064 cars in France were involved in the scandal that has rocked the automobile industry.

They are mostly Volkswagen models, but also include Skoda and Seat cars which are part of the VW group.

The French government called for a Europe-wide probe after the German car manufacturer admitted it had equipped cars with sophisticated software that covertly turns off pollution controls when the car is being driven and turns them on only when it detects that the car is undergoing an emissions test.

Volkswagen announced plans on Tuesday to refit up to 11 million vehicles and overhaul its namesake brand following the scandal over its rigging of emissions tests.

New Chief Executive Matthias Mueller said the German car maker would ask customers "in the next few days" to have diesel vehicles that contained illegal software refitted, a move which some analysts have said could cost more than $6.5 billion.

Europe's biggest car maker has admitted cheating in diesel emissions tests in the United States and Germany's transport minister says it also manipulated them in Europe, where Volkswagen sells about 40 percent of its vehicles.