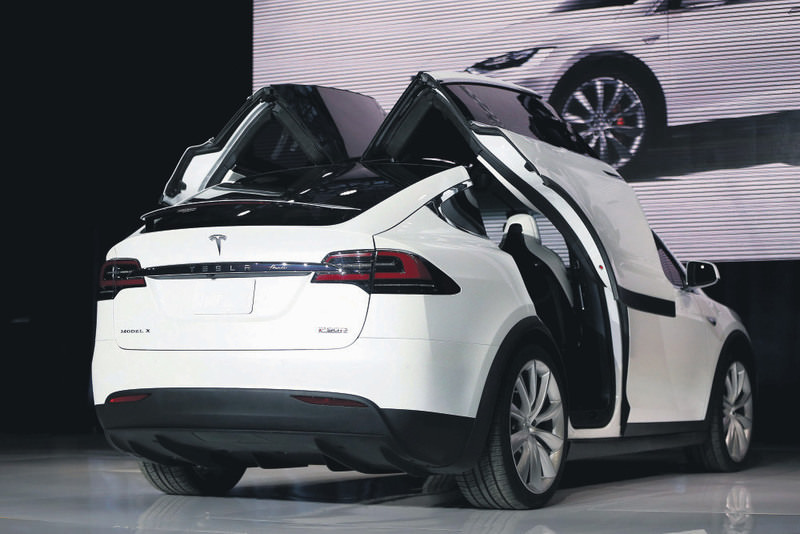 by Associated Press Oct 01, 2015 12:00 am
Electric vehicle maker Tesla Motors has mastered the sporty two-seater and the elegant sedan. Now, it wants to conquer the family hauler. Tesla's Model X one of the only all-electric SUVs on the market was officially unveiled Tuesday night near the company's California factory. SUVs were delivered to the first six buyers.

CEO Elon Musk says the Model X sets a new bar for automotive engineering, with unique features like rear falcon-wing doors, which open upward, and a driver's door that opens on approach and closes itself when the driver is inside.

The Model X is the third vehicle from 12-year-old Tesla, after the Roadster which was discontinued in 2012 and the Model S sedan. It should attract new customers particularly women to the brand, and it goes on sale as the market for luxury SUVs is booming. U.S. luxury SUV sales were up 17 percent through August, five times better than the industry as a whole.

"If Tesla's going to be a more significant player, they need more products, and SUVs are what the market is demanding," said Michelle Krebs, a senior analyst with the car buying site AutoTrader.com. Musk said Tesla expects about half of its sales to be SUVs.

But there are drawbacks. Only a fraction of the sippy-cup set will be able to afford the Model X, even with a $7,500 federal tax credit. A fully loaded performance model is $142,000; exact pricing of the base model hasn't been released, but Musk said the Model X will cost $5,000 more than an equivalent Model S, or around $93,000. Musk said the company will eventually offer a less expensive variant with a smaller battery.

The Model X shares a platform and motor with the Model S, which is made at the same factory. But unlike the S, which has several battery options, the X only has a 90 kilowatt-hour battery and only comes with all-wheel drive. The 90D version will go 257 miles on a full charge, while the P90D performance version will go 250 miles. Tesla's high-speed "ludicrous mode" is offered on the P90D; it goes from 0 to 60 mph in 3.2 seconds.

But the most eye-popping feature is the double-hinged falcon-wing doors. They need less than a foot of clearance to open, and they're fitted with sensors so they won't trap hands or hit cars parked next to them.

The Model X is alone, for now, in the all-electric luxury SUV market. Its closest competitor is the plug-in hybrid Porsche Cayenne SUV, which starts at $77,200. But others, spurred by Tesla, are planning their own all-electric models. Audi said this month that it will have an all-electric SUV by 2018.
RELATED TOPICS