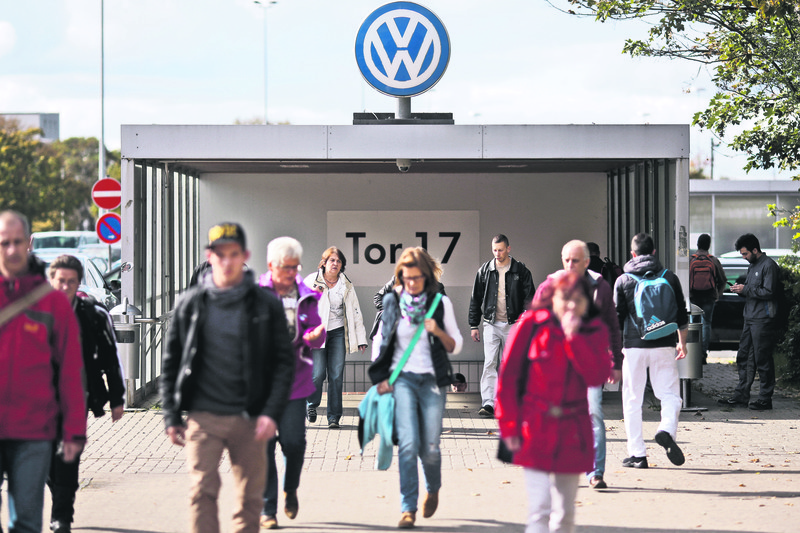 People leave the Volkswagen factory at Gate 17 in Wolfsburg, Germany. Thanks to Volkswagen, Wolfsburg boomed in West Germany's post-war rebirth, and today the town and the company are inseparable.
by Daily Sabah with Wires
Oct 02, 2015 12:00 am

The extent of the fallout from the scandal, which erupted Sept. 18 when the U.S. Environmental Protection Agency said VW had cheated on tests of its diesel cars, remains unclear as do the costs to Volkswagen. Longtime CEO Martin Winterkorn quit last week, but said he was aware of no wrongdoing on his part.

In Germany, Stella Pechmann, a spokeswoman for the engine plant in the city of Salzgitter, confirmed a report Wednesday in the Wolfsburger Allgemeine Zeitung daily that a "special shift" is being cut as a precaution because of the current situation. The shift had previously been added to deal with high demand. Separately, the Volkswagen Financial Services division is freezing new hiring until the end of the year, though spokesman Stefan Voges told news agency dpa that existing hiring agreements are unaffected.

The scandal has raised concerns that the reputation of German automakers and engineering as a whole could be tarnished, though Finance Minister Wolfgang Schaeuble said he doesn't see the affair damaging Germany as a business location.

In the United States, a spokeswoman for Illinois Attorney General Lisa Madigan said late on Wednesday that a subpoena for information had been issued to Volkswagen as part of an investigation into the emissions cheating. More than two dozen U.S. states have launched a probe of the carmaker separate from an investigation by the federal government in Washington. Volkswagen also faces millions of dollars in fines in Australia if it is found to have misled local consumers on emissions claims, Australia's competition regulator said yesterday.

On the otherhand, Volkswagen is looking at ways to cut costs and boost cash flow and could sell more shares if the price of clearing up a scandal over its rigging of diesel emissions tests puts its credit rating at risk, accordin to Reuters.

So when it was revealed this month that the automaker had cheated on U.S. emissions tests, causing its shares to plummet, the mood here darkened.

"People are feeling a little down, like heads will roll, and not up high but at the lower levels," said 65-year-old Mark Graff, waiting outside the VW gates to pick up his daughter after her shift on the assembly line. Graff, whose son also works full-time at the plant, said there was worry that if sales slumped, shifts would be cut. "First will be the part-time workers, and there are a lot of them," he said. Nobody knows quite what to expect, but nobody thinks the coming months are going to be easy as the world's top-selling car manufacturer struggles to deal with myriad legal and technical problems while trying to restore its image. The city is already freezing spending and hiring.

It's an understandable attitude, considering that Wolfsburg is Germany's financially strongest city thanks primarily to Volkswagen. Its economic output per person is the highest in the country. Ingolstadt, home to VW subsidiary Audi, is in fourth place.

This town of 120,000 people has 120,000 jobs, drawing commuters also from the surrounding area. Some 70,000 work for Volkswagen, while many others depend upon the company. Wolfsburg is as dependent on the auto sector as Detroit was in its heyday.

Sumon Ahmed, a 24-year-old who was working at the Volkswagen plant for the summer, said he'd heard people saying they might not get a bonus a hefty 5,900 euros ($6,610) per employee covered by the union contract last year.

Wolfsburg Mayor Klaus Mohrs announced this week that there would be an immediate spending freeze, and a hiring freeze for town jobs. Projects underway are being allowed to continue, but no new ones are to be undertaken. Ingolstadt has followed suit, also announcing spending cuts.

Qatar Investment Authority's hit from the slide in Volkswagen and Glencore shares can only underline the sovereign wealth fund's need to continue to diversify its asset base, industry sources said.

The German carmaker has been pummelled over an emission testing scandal while the miner has came under pressure over its debt load, together wiping $5.8 billion off the Qatar fund's holdings since September 18, according to Thomson Reuters data. Much has been made of the scale of the Qatar Investment Authority's (QIA) paper losses at a time lower oil prices are reducing the flow of petrodollars into Gulf sovereign wealth funds. QIA has 8.2 percent of Glencore, 17 percent of Volkswagen ordinary shares and 12.8 percent of its preference shares.

The QIA, which has about $334 billion of assets, has been reviewing its investment strategy as a result of oil's downward move. In June, sources said it would set asset allocation targets for the first time and restructure internal decision making.