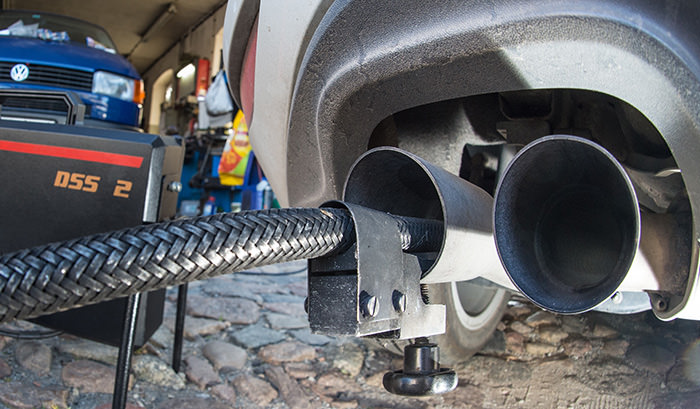 A measuring hose for emissions inspections in diesel engines sticks in the exhaust tube of a Volkswagen (AFP Photo)
by daily sabah
Oct 02, 2015 12:00 am

The first cases against Volkswagen in Turkey have been filed, with the company facing an inquiry in France and banning in Switzerland. Also, VW's top U.S. executive will testify before a U.S. panel

Amid the growing emissions test scandal, Volkswagen is being put under the microscope every passing day. The first cases related to the emissions-cheating scandal have been filed by an Istanbul-based law firm, although more complaints are expected to be filed in the coming weeks. Also, Volkwagen AG's top U.S. executive will testify on Oct. 8 before a U.S. congressional oversight panel about the German automaker's emissions cheating scandal involving 11 million vehicles worldwide, a panel spokesman said. Michael Horn, president and chief executive of Volkswagen Group of America, will appear before an investigations panel of the House Energy and Commerce Committee for proceedings scheduled to begin at 10 a.m. Lawmakers will also hear from the U.S. Environmental Protection Agency.

Europe's largest carmaker has admitted to cheating on U.S. diesel emissions tests in the United States with a software algorithm, known as a "defeat device," which switched on emissions control systems during regulatory tests. Volkswagen also says it manipulated emissions results in Europe.

The scandal has prompted the EPA to toughen and broaden emissions tests for all automakers in an effort to thwart any other cheating activities, a move that could add to industry costs and higher regulatory hurdles.

Also, the Paris Prosecutor has opened a preliminary inquiry into suspected "aggravated deception" by Volkswagen, an official from the prosecutor's office told Reuters on Friday.

The move adds to the legal burden the German carmaker faces after U.S. investigators found that it had rigged vehicle pollution emissions tests. France's consumer protection code allows for prison sentences of five years and a fine of 600,000 euros for aggravated deception, the Prosecutor's office said.

French consumer protection and fraud control authorities have launched a separate investigation on whether VW cheated on emissions focusing in particular on vehicles software devices. The results of that probe, which is not a penal investigation, are expected in November or December.

Volkswagen has said there were 946,092 vehicles in France equipped with the EA 189 engines affected by the emissions data manipulation carried out by the company worldwide.

New VW cars purchased may not be registered for driving, and used vehicles that have been imported will also not receive registration, the office said in a statement.

Cars from the German automaker already registered can be used on the country's highways, however.

According to Volkswagen's Swiss distributor AMAG, about 129,000 vehicles in Switzerland have the software.

Meanwhile, an investigation into the emissions fixing scandal at the car firm Volkswagen should not turn in to a campaign against the industry as a whole, German Vice Chancellor Sigmar Gabriel said on Friday at a conference in Madrid.

An in-depth investigation in to VW, after it was found using software in its cars which falsified gas emission data, was preferable to a quick audit, Gabriel said.
Last Update: Oct 02, 2015 4:04 pm