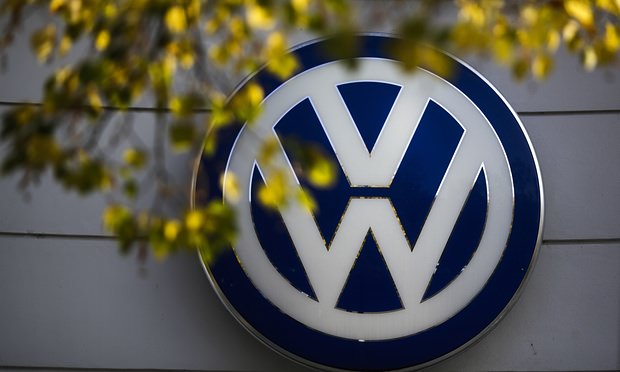 In this Oct. 5, 2015 file photo the VW sign of Germany's car company Volkswagen is displayed at the building of a company's retailer in, Berlin, Germany. (AP Photo)
by Associated Press Oct 15, 2015 12:00 am
German authorities on Thursday ordered a recall of all Volkswagen cars fitted with emissions test-cheating software, a decision that will affect 8.5 million VW diesel vehicles across the 28-nation European Union.

The Federal Motor Transport Authority announced that the recall would affect 2.4 million vehicles in Germany. Under EU rules, cars that are cleared in one country are automatically approved across the bloc, so the repeal also affects Volkswagen vehicles elsewhere in the union.

Austrian authorities have already said some 363,000 VW cars there are affected by the recall.

Volkswagen said in a statement that it would approach customers, who can already enter their car's serial number on a special website to find out whether it is affected. Apart from the company's VW brand, Audi, SEAT and Skoda cars can also be checked.

The fix will be free for customers, it said.

Also Thursday, U.S. environmental regulators said they expect to get a proposed fix from Volkswagen next week on about 90,000 of the 482,000 cars with the cheating software in the U.S. The fix must be tested before the U.S. Environmental Protection Agency will seek a recall. It's unclear when the remaining U.S. cars would be fixed.

In Germany, Transport Minister Alexander Dobrindt said Volkswagen would have to present replacement software for certain cars that have a 2.0 liter diesel engine this month and begin fitting vehicles with them next year.

"VW is ordered ... to remove the software from all vehicles and to take appropriate measures to ensure that the emissions rules are fulfilled," Dobrindt told reporters in Berlin.

The dpa news agency reported that the Motor Transport Authority, which answers to Dobrindt's ministry, rejected a Volkswagen proposal for a voluntary recall.

He indicated that the recall may last through 2016 because vehicles fitted with smaller 1.6 liter diesel engines will require physical adjustments rather than just a software update.

Those hardware changes, which may not be ready before September 2016, will determine the timeline, he said.

In a letter to Dobrindt provided to The Associated Press, Volkswagen's chief executive Matthias Mueller said the recall would "stretch through the 2016 calendar year."

The company recently disclosed the existence of further suspect software in 2016 diesel models. Dobrindt said additional tests were under way that would include examining emissions outside the lab.

The U.S. EPA has authority to order automakers to recall vehicles that pollute more than allowed by law. But generally manufacturers agree to recalls when asked by the EPA, spokeswoman Laura Allen said. In 2012 and 2013, the latest years for which data is available, companies agreed to 67 emissions recalls covering about 4 million vehicles, she said.

Asked about German media reports that more than two dozen Volkswagen managers had been suspended by the company amid signs that knowledge of the defeat devices was widespread, Dobrindt said his ministry had "no information about who decided where, when at Volkswagen about the use of such software."

Volkswagen has said that some managers had been suspended, but said the report Wednesday of up to 30 "lacks any basis."

Mueller, the CEO, said in his letter Thursday that a "concerted and reliable approach" by all EU members would be in the best interest of customers.

Volkswagen faces possible fines after U.S. authorities discovered it had equipped 482,000 cars with software that disabled emissions controls except when the cars were being tested.
Last Update: Oct 16, 2015 12:14 am
RELATED TOPICS