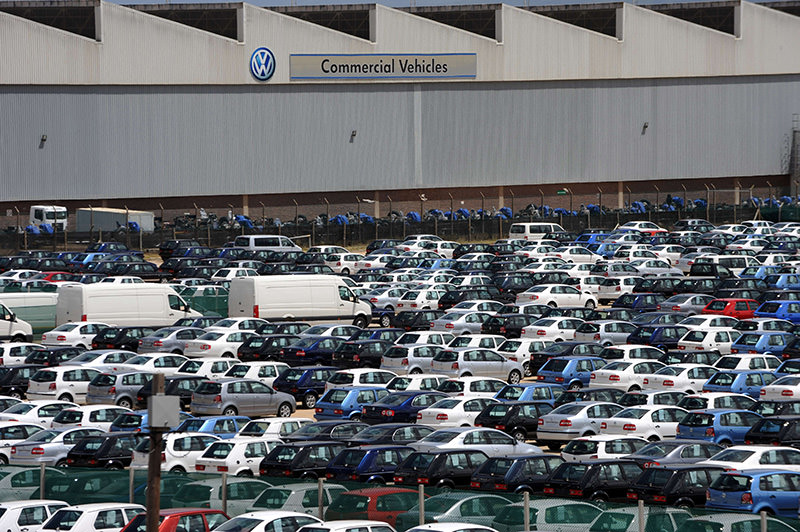 |AFP Photo
by reuters
Oct 17, 2015 12:00 am
Volkswagen is considering a reduction in temporary workers as part of efforts to offset the cost of the emissions scandal, the car maker's works council said on Saturday.

A spokesman for the council, a grouping of labour representatives within the company, said it would support efforts to secure temporary jobs but was aware the company's board was discussing "different scenarios".

Volkswagen said in a statement that the outlook for its sales and employment levels were unpredictable, having on Friday reported lower September deliveries for its core autos division and the 12-brand group as a whole.

"If employment declines temporarily, shortened working hours will be a reasonable option," VW said, adding that the executive board was doing everything it could to secure jobs.

Reeling from the scandal over its rigging of diesel emissions, Volkswagen has said it will cut investment plans at its biggest division by 1 billion euros ($1.1 billion) a year.

Some analysts have said the scandal could cost Volkswagen as much as 35 billion euros ($40 billion) to cover vehicle refits, regulatory fines and lawsuits.

The scheme allows companies to preserve jobs by reducing employees' hours when plant usage is low, with the government compensating workers for part of their lost wages.

The Federal Labour Office has ruled out the idea, already floated by Economy Minister Sigmar Gabriel, of including temporary workers in the plan, from which they would normally be excluded. But Berlin wants to be prepared for cost cuts at Volkswagen.

A government spokesman could not immediately be reached for comment.

Works council head Bernd Osterloh had said earlier this month it was not yet clear whether the emissions scandal would affect jobs over the medium to longer term. "At this point, there are no consequences for jobs, neither for core workers nor for temporary staff."
Last Update: Oct 17, 2015 3:55 pm