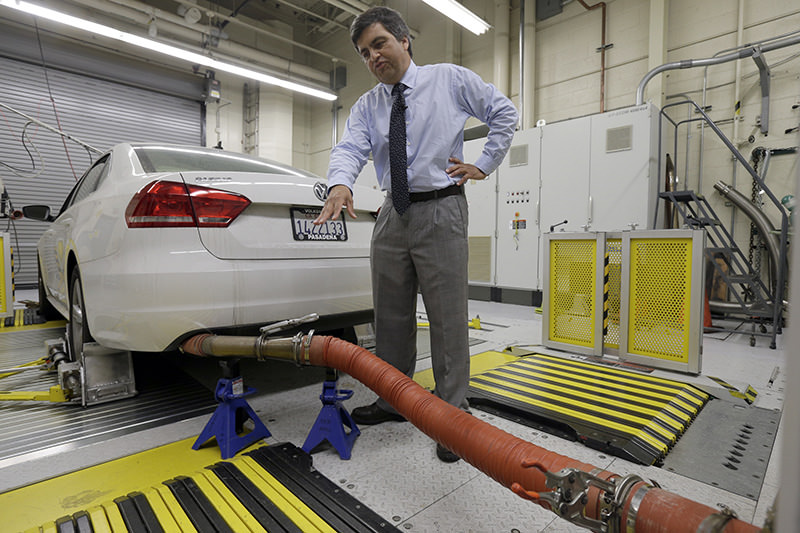 by French Press Agency - AFP
Oct 20, 2015 12:00 am
Carbon dioxide (CO2) emissions from cars registered in Europe in 2014 were 40 percent higher on average than their manufacturers claimed, said a report prompting calls Wednesday for an investigation.

The gap between real-world pollution and industry lab results has grown by more than 30 percent since 2001, said the International Council on Clean Transportation (ICCT), an independent research body with offices worldwide.

Some cars, including mid-range models from Mercedes, BMW and Peugeot, were found to exceed stated emissions levels by 50 percent, the ICCT found.

The report comes hot on the heels of German car giant Volkswagen admitting to having installed "defeat device" software in some 11 million cars since 2009 to evade nitrogen oxides (NOx) pollution standards, especially in the United States.

Cars equipped with the software detect and pass emissions tests, then spew 30 to 40 times more NOx than permitted when on the road.

"The Volkswagen scandal was just the tip of the iceberg and what lies beneath is widespread abuse by carmakers of testing rules."

Factors other than cheating may also account for the growing gap in Europe between so-called certification testing results and actual emissions, based on mileage reported by consumers.

"But for some models, the gap is simply too high to be explained by test manipulations, and this must be investigated," Julia Poliscanova, a policy officer at Transport & Energy, told AFP.

European regulations also make it possible for manufacturers to optimize stationary road tests -- in which cars are "driven" on rollers -- to levels not possible in real life.

And features which increase fuel consumption, such as air conditioning, are switched off during testing.

These and other measures have allowed car makers to legally pass European Union (EU) pollution tests even if actual emissions are much higher, watchdog groups say.

"Currently NOx emissions of diesel vehicles measured on the road may in reality exceed substantially the emissions measured on the regulatory test cycle," it said in an online "fact sheet" posted on September 25, the day after the ICCT results were published.

"The Commission has therefore been working intensely to develop robust procedures for the emission testing of vehicles in real driving."

Contacted by AFP, PSA Peugeot Citroen declined to comment on the report, but a spokesman said: "We are committed to reducing fuel consumption. This translates into a steep reduction in consumption from one generation of vehicles to another."

Daimler, the German maker of Mercedes cars, challenged the conclusions.

"The authors of the study failed to say how many Mercedes cars were tested," spokesman Mathias Brock told AFP.

The 90-page ICCT report stacked up manufacturer claims against driver reports of mileage performance for 600,000 vehicles in six countries.

Brock criticized the use of such sites, noting that "anyone can enter data in Sprintmonitor."

The report's authors acknowledge that a precise measure of real-world driving is elusive because of variations in vehicle types, driving behavior and road conditions.

But this did not explain the increase in the gap between lab and real-life emissions, they said.

Cars are responsible for 15 percent of the EU's total emissions of CO2 -- the most pervasive climate-altering greenhouse gas. They are also the single largest source of CO2 in the transport sector.