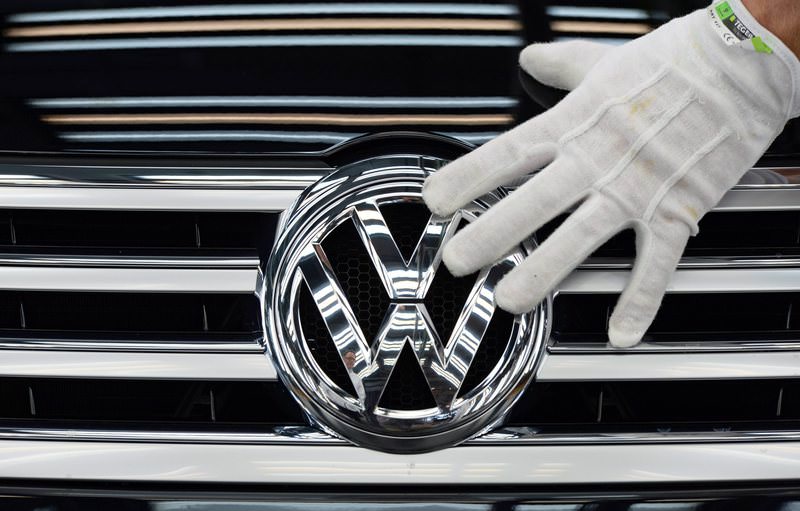 German auto giant VW said on October 28, 2015 that the global pollution-cheating scam it is currently embroiled in pushed it deeply into the red in the 3rd quarter and would hurt earnings for the whole of 2015. (AFP Photo)
by French Press Agency - AFP
Nov 03, 2015 12:00 am
German auto giant Volkswagen said Tuesday an internal probe in the wake of its pollution cheating revelations had found that 800,000 more vehicles showed "inconsistencies" related to carbon emissions, which could cost the company two billion euros.

"During the course of internal investigations, unexplained inconsistencies were found when determining Type Approval CO2 levels," the company said in a statement.

"Based on present knowledge around 800,000 vehicles from the Volkswagen Group are affected.

Volkswagen sank into the biggest crisis in its history over its admission that 11 million of its vehicles had been fitted with devices designed to cheat official pollution tests.

The so-called defeat devices turn on pollution controls when cars are undergoing tests and off when they are back on the road, allowing them to spew out harmful levels of nitrogen oxide.

The revelations sparked global outrage and investigations in several countries including its home turf Germany.

Volkswagen itself has also promised to investigate how such a scam could have been perpetuated at a global level and whether there were other irregularities surrounding its vehicles.

Tuesday's admission of irregularities surrounding carbon emissions is yet another setback for the company, and comes a day after US authorities accused it of fitting the defeat devices also on its larger 3.0 litre diesel vehicles.