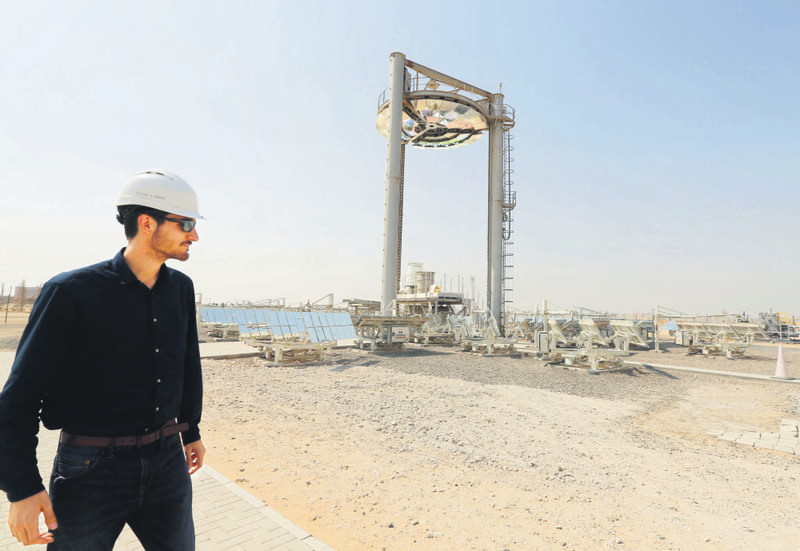 by Nov 24, 2015 12:00 am
Rising from the desert outside Abu Dhabi, the city of Masdar is laying the groundwork for when the United Arab Emirates' (UAE) oil wells run dry. Driverless electric cars shuttle between energy-saving buildings topped with arrays of solar panels.

On the edge of the complex, a 10-megawatt solar farm lined with photovoltaic panels provides clean energy. First announced in 2007, Masdar, in the suburbs of Abu Dhabi, has not yet become the city of 40,000 authorities promised, with only a few hundred people, mainly students, living there. But the complex, which hosts the International Renewable Energy Association Agency (IRENA) and the Masdar Institute for Science and Technology, is at the forefront of the UAE's efforts to focus on renewables.

The company that bears its name has invested huge sums on green energy - an unusual move for a country better known as an oil and gas producer and exporter.

Sitting on 5.9 percent of the world's oil reserves and 3.1 percent of its natural gas, the UAE, a federation of seven emirates, is a key player in the global energy market.

The discovery of commercial quantities of oil in the UAE in the late 1950s transformed the area, turning a few pearl-diving towns wedged between the Persian Gulf and the desert into an economic powerhouse.

But its rulers know the oil will not last forever, with Abu Dhabi's Crown Prince Sheikh Mohammed bin Zayed al-Nahyan warning earlier this year that the country's last tanker load will be exported in 50 years.

"We understood that for us to maintain our leadership in the [energy] sector, we have to get into renewable, and we have done that," Masdar chief executive officer Ahmad Belhoul told Agence France-Presse (AFP).

Nawal al-Hosany, head of sustainability at Masdar, said the UAE had an "ambitious" plan for "leveraging its resources from the hydrocarbon industry into this new sector."

The UAE says it is expecting to invest $35 billion in non-hydrocarbon energy by 2020, including $20 billion on the Barakah 5.4-gigawatt nuclear power project. Masdar has joined a number of clean energy projects abroad, Hosany said, investing some of the massive reserves the UAE has built up over the years.

Masdar is a partner in the 20-megawatt Gemasolar power plant in southern Spain, the world's first solar power station that generates electricity at night. It also has a 20 percent share in the London Array wind power project, which has a capacity to generate 630 megawatts, enough to power nearly 500,000 homes in Britain. At home, Masdar spent $600 million to build the Shams 1 plant, the world's largest concentrated solar power plant, west of Abu Dhabi, with a capacity to generate 100 megawatts.
RELATED TOPICS