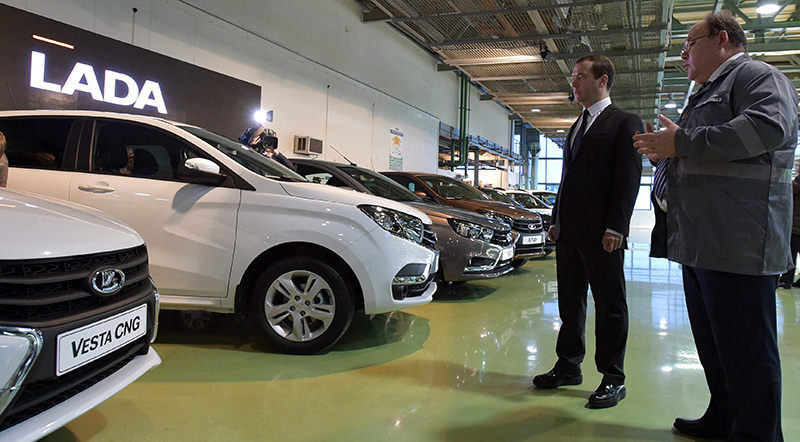 Russian Prime Minister Dmitry Medvedev (L) visits the AvtoVAZ automobile plant in Togliatti, Russia, 22 January 2016 (EPA Photo)
by Feb 12, 2016 12:00 am
Russia's top automaker AvtoVaz, controlled by Renault-Nissan, on Friday asked shareholders to help save it from bankruptcy as losses in 2015 tripled from the year before.

Hit hard by Russia's economic crisis the company, maker of Lada cars, said it would further "optimize the workforce" as part of its "anti-crisis plan" to improve finances in 2016, having already switched all of its employees and management to a four-day week in February last year.

Without help, market conditions "create a material uncertainty that gives rise to significant doubt about the group's ability to continue as a going concern", Avtovaz said in a statement.

Sales fell by eight percent to 176.5 billion rubles ($2.2 billion), while the car market on average shrank by 36 percent.

Renault said earlier from Paris that the Avtovaz losses weighed on its group results with 620 million euros.

Based on the Volga river in the city of Togliatti, Avtovaz is majority owned since 2013 by Renault-Nissan and employs 44,000 people, not counting jobs it generates in the region for its suppliers.

The company promised to target "revenue improvements, cost reduction measures and sales of non-core assets" in its anti-crisis plan but warned that it needs help from shareholders to refinance its debt and secure new loans.
Last Update: Feb 12, 2016 11:28 am
RELATED TOPICS