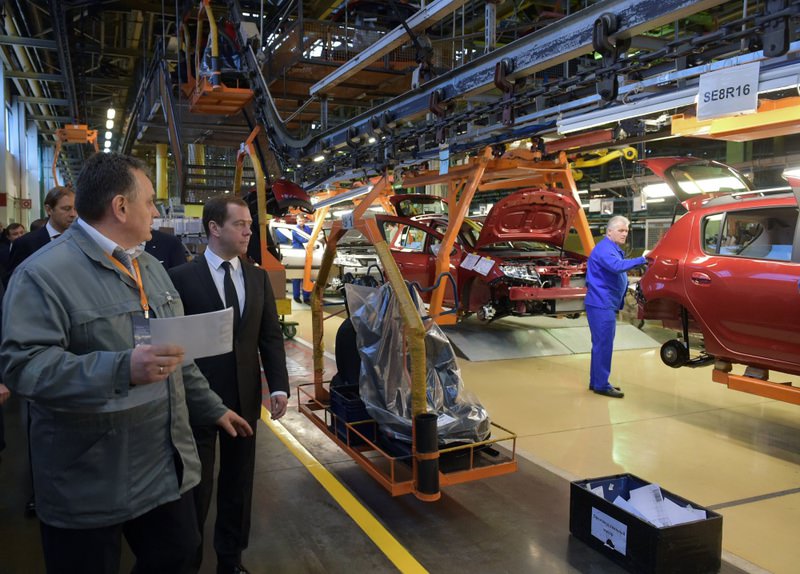 by Daily Sabah Feb 16, 2016 12:00 am
AvtoVAZ is to put employees on a four-day week from today, resulting in a 20 percent pay cut as the economic travails in Russia continue to have a heavy price on the country's automotive sector, according to just-auto.com. Russia's Association of European Businesses (AEB) posted especially gloomy numbers for December showing a precipitous 46 percent drop in passenger cars and LCV statistics, while figures for 2015 were 36 percent down.

The Togliatti-based automaker will be hoping the reduced working week - applicable for a maximum of six months in Russian law and spiraling up to top management - coupled with the launch of its Lada Xray and Vesta models - will insulate it from the worst effects of a severe economic downturn. Russia is enduring a perfect storm of economic headwinds, namely high inflation, a depreciating ruble, plummeting oil prices and moribund consumer confidence, not helped by steep interest rates. To counter the downturn, the Kremlin is to pump 50 billion rubles ($651 million) into the automotive industry, mainly through an aim to reduce Russia's car parc age, while lower vehicle credit and rental rates programs will remain.

Russian companies will also receive financial support on their investment credits, with the state allocating funds to regional authorities. This money will be used to purchase municipal service vehicles running on natural gas, as well as to purchase buses and trolleybuses. "This [four-day week] is one of the crisis measures to help us preserve core personnel in the factory," an AvtoVAZ spokesman told just-auto from Russia. "That will [result in] pay cuts, that is logical and it will include top management. It is a 20 percent cut. "Under Russian legislation, if a company is using a four-day week or a cut in work, this regime can be used for half a year.

"This is a measure to cope with the existing economic situation - the biggest challenge for us is to preserve core personnel. It is prohibited to have any lay-offs during this [reduced working] regime."

This year, AvtoVAZ celebrates 50 years of existence since its creation in the Soviet Union and the automaker received a very public endorsement of its credentials as an iconic Russian brand, with the visit to Togliatti of Prime Minister, Dmitry Medvedev.

The Russian prime minister tested the Lada Xray ahead of its launch on Feb. 14 and his visit added to backing by President Vladimir Putin of AvtoVAZ's Vesta last October and his trumpeting of component localization.
RELATED TOPICS