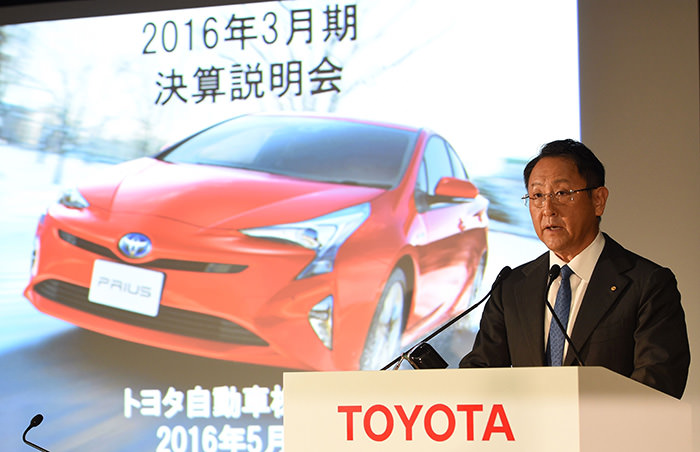 Toyota Motors president Akio Toyoda delivers a speech during a press conference to announce the company's financial results at their Tokyo headquarters on May 11, 2016 (AFP Photo)
by May 11, 2016 12:00 am

Toyota on Wednesday warned that net profit in the current fiscal year would fall by about a third as a stronger yen, and a slowdown in Chinese growth and other emerging markets dent its bottom line.

That is down 35 percent from a record 2.31 trillion yen net profit the world's biggest automaker also reported Wednesday for its recently ended business year.

Sales this year will also be down nearly 7 percent, it added, although the automaker expects to sell more cars globally.

Toyota also said it would buy back about 500 billion yen worth of its shares.

The new outlook - which does not include the impact of plant shutdowns linked to Japan's deadly earthquakes last month - underscores the negative impact that a resurgent yen is having on the bottom lines of Japanese firms doing business abroad.

"Our earnings over the past several years have been boosted by (favorable) exchange rates," Toyota president Akio Toyoda said.

"But we recognize that this trend has changed significantly."

Sales for the latest period rose in Toyota's key North American market, but they were down in Japan, Europe and Asia, including top vehicle market China, it said.

"China and other emerging countries are showing a risk of a slowdown," Toyota said.

Weakening demand in emerging markets such as Thailand and Indonesia, as well as a planned consumption tax hike in Japan next year, could also eat into Toyota's bottom line, analysts have warned.