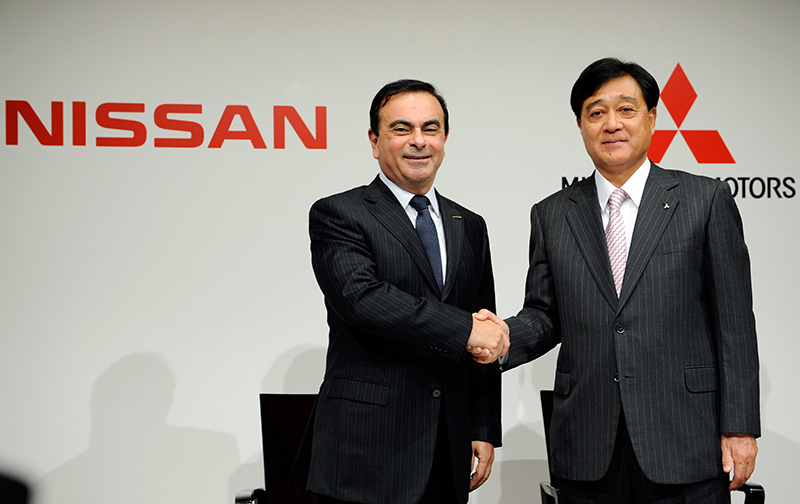 Nissan threw a lifeline to Mitsubishi as it announced plans to buy a one-third stake in the scandal-hit automaker for $2.2 billion, forging an alliance that will challenge some of the world’s biggest auto groups

Nissan Motor Co. is taking a 34 percent stake in scandal-ridden Mitsubishi Motors Corp. in what Nissan Chief Carlos Ghosn said is "a win-win" deal intended to repeat the success of his Nissan-Renault alliance. Ghosn appeared with Mitsubishi Motors Chairman Osamu Masuko in a hastily called joint conference yesterday in Yokohama, where Nissan is headquartered. Ghosn said Nissan will invest 237 billion yen ($2.2 billion) to become the top investor in Mitsubishi Motors.

Mitsubishi group companies - Mitsubishi Heavy Industries, trading company Mitsubishi Corp. and the Bank of Tokyo-Mitsubishi UFJ - will continue to hold stakes in the automaker, but they have agreed to support the alliance with Nissan, both sides said.

Mitsubishi Motors has been recently rocked by a scandal over cheating on mileage tests to inflate mileage for minicar models. And reporters peppered Ghosn with questions on whether he was worried that the scandal may grow.

"This is a breakthrough transaction and a win-win for both Nissan and Mitsubishi Motors. It creates a dynamic new force in the automotive industry that will cooperate intensively and generate sizeable synergies," said Ghosn, the Brazilian-born Frenchman who engineered Nissan's alliance with Renault, which began in 1999.

Adding Mitsubishi will be a plus in sharing platforms, purchasing and technology, and Nissan will benefit from its strengths in southeast Asia, Ghosn said. He said he has a close relationship with Masuko and they have a good relationship built on trust.

The automakers will maintain separate identities, brands and dealerships, Ghosn and Masuko said. Under the deal, Nissan will purchase 506.6 million newly issued Mitsubishi Motors shares for 468.52 yen a share. The deal is still subject to a formal signing of an agreement, regulators' and shareholders' approvals, but expected to close by the end of the year.

Masuko apologized for the scandal but welcomed the alliance with Nissan.

"This agreement will create long-term value needed for our two companies to progress toward the future," he said.

Tokyo-based Mitsubishi Motors, which makes the makes the Outlander sport-utility vehicle and the i-MiEV electric car, acknowledged last month that it had systematically falsified mileage data on its eK wagon and eK Space light passenger cars, which were produced for Nissan as the Nissan Dayz and Dayz Roox. It is common for a manufacturer to sell a product made by another company under its own brand.

The latest scandal surfaced after Nissan did its own mileage tests and raised questions. Nissan does not have minicars in its lineup, and placing Mitsubishi under its group umbrella would be one solution.

But Nissan, which makes the March subcompact, Infinti luxury models and Leaf electric car, would face a major challenge in repairing Mitsubishi's tarnished reputation and winning back consumer trust.

Nissan suffered a 40 percent plunge in January-March profit as sales dipped and currency perks faded. It reported a 71 billion yen ($651 million) profit for the quarter yesterday. It had a 119 billion yen profit the same period of 2015. Quarterly sales edged down 1.2 percent to 3.25 trillion yen ($29.8 billion).