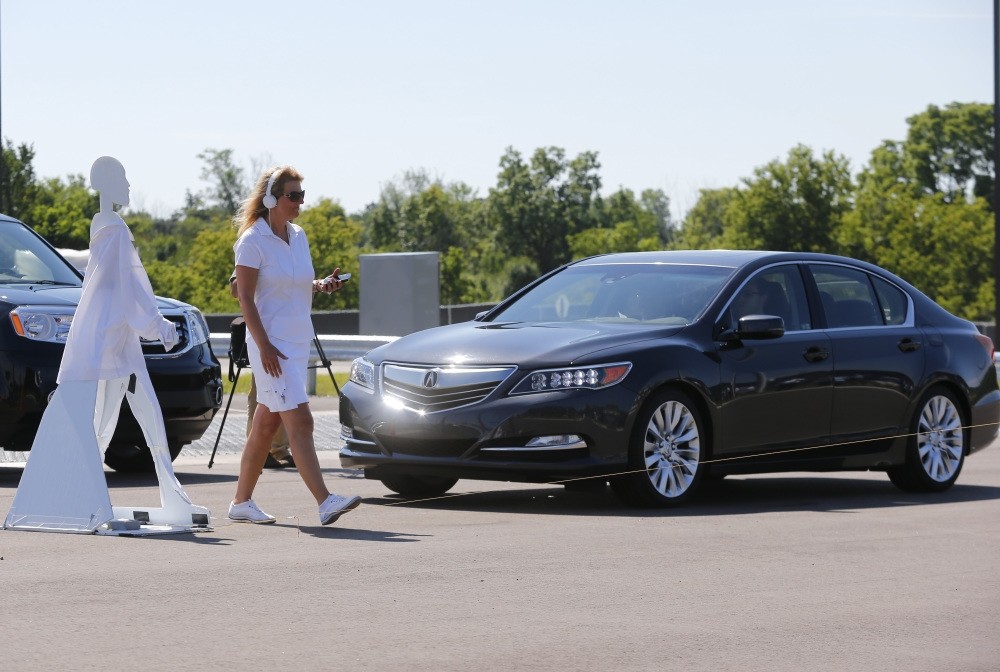 A pedestrian crosses in front of a vehicle as part of a demonstration at Mcity on its opening day on the University of Michigan campus in Ann Arbor, Mich.
by Associated Press Aug 27, 2016 12:00 am

The cable television and high-tech industries want to take away a large share of the radio airwaves the U.S. government has dedicated for transportation and use it instead for superfast Wi-Fi service

Cars that wirelessly talk to each other are finally ready for the road, creating the potential to dramatically reduce traffic deaths, improve the safety of self-driving cars and someday maybe even help solve traffic jams, automakers and government officials say. But there's a big catch. The cable television and high-tech industries want to take away a large share of the radio airwaves the government dedicated for transportation in 1999, and use it instead for superfast Wi-Fi service. Auto industry officials are fighting to hang on to as much of the spectrum as they can, saying they expect they will ultimately need all of it for the new vehicle-to-vehicle communications, or V2V.

The government and the auto industry have spent more than a decade and more than $1 billion researching and testing V2V technology. The National Highway Traffic Safety Administration is expected to propose as early as next month that new cars and trucks come equipped with it. General Motors isn't waiting for the proposal, saying it will include V2V in Cadillac CTS sedans before the end of the year.

"We're losing 35,000 people every year (to traffic crashes)," said Harry Lightsey, a General Motors lobbyist. "This technology has the power to dramatically reduce that. To me, the ability of somebody to download movies or search the internet or whatever should be secondary to that."

The fight pits two government agencies against each other: the Federal Communications Commission, which regulates spectrum and sympathizes with wireless proponents, and NHTSA, which regulates auto safety and has long made V2V a top priority. The White House, which is currently reviewing NHTSA's proposal to require the technology in new cars, is caught between two of its goals: greater auto safety and faster wireless service.

With V2V, cars and trucks wirelessly transmit their locations, speed, direction and other information ten times per second. That lets cars detect when another vehicle is about to run a red light, is braking hard or is coming around a blind turn in time for the driver or, in the case of self-driving cars, for the vehicle itself to take action to prevent a crash.

V2V's range is up to about 1,000 yards in all directions, even when sight is blocked by buildings or other obstacles. That gives the technology the advantage of being able to detect a potential collision before the driver can see the threat, unlike the sensors and cameras of self-driving cars that sense what's immediately around the vehicle.

In May, a Tesla Model S sedan in "autopilot" mode crashed into the side of a tractor-trailer that was making a left turn, killing the Tesla driver and drawing attention to the limitations of self-driving technology. The accident is still under investigation, but auto industry experts say that if the two vehicles had been equipped with V2V, the crash likely would have been avoided. The government estimates that V2V could eventually prevent or mitigate more than 80 percent of collisions that don't involve a driver impaired by drugs or alcohol. Ultimately, self-driving cars also equipped with V2V may be the answer to traffic congestion because they'll be able to synchronize their movements, industry officials say, so that they can merge seamlessly and travel in long, closely packed caravans at higher speeds. That would improve traffic flow and increase highway capacity. Cars will also communicate with traffic signals to make intersections more efficient.

Those who want more of the airwaves for Wi-Fi say that with self-driving cars on the horizon to eliminate human errors, the safety benefits of V2V are less important. They point out that it could be more than 20 years before the full benefits of V2V are realized, because it takes decades for the automotive fleet to be completely replaced. As the airwaves grow more congested with traffic such as video chat and streaming, new, unreserved swaths of spectrum are seen as key to creating the "wider pipe" needed to meet demand. Automakers say they're willing to share the spectrum, but only if it won't cause V2V signals to be dropped or slowed. The safety signals need to transmit 10 times faster than a typical cellphone call and be 100 percent reliable. The FCC plans to test proposals to share the airwaves. Meanwhile, wireless supporters have petitioned the FCC for an emergency order to put off using V2V in the contested spectrum until cybersecurity standards are developed. Automakers contend that such safeguards already are built in.
RELATED TOPICS