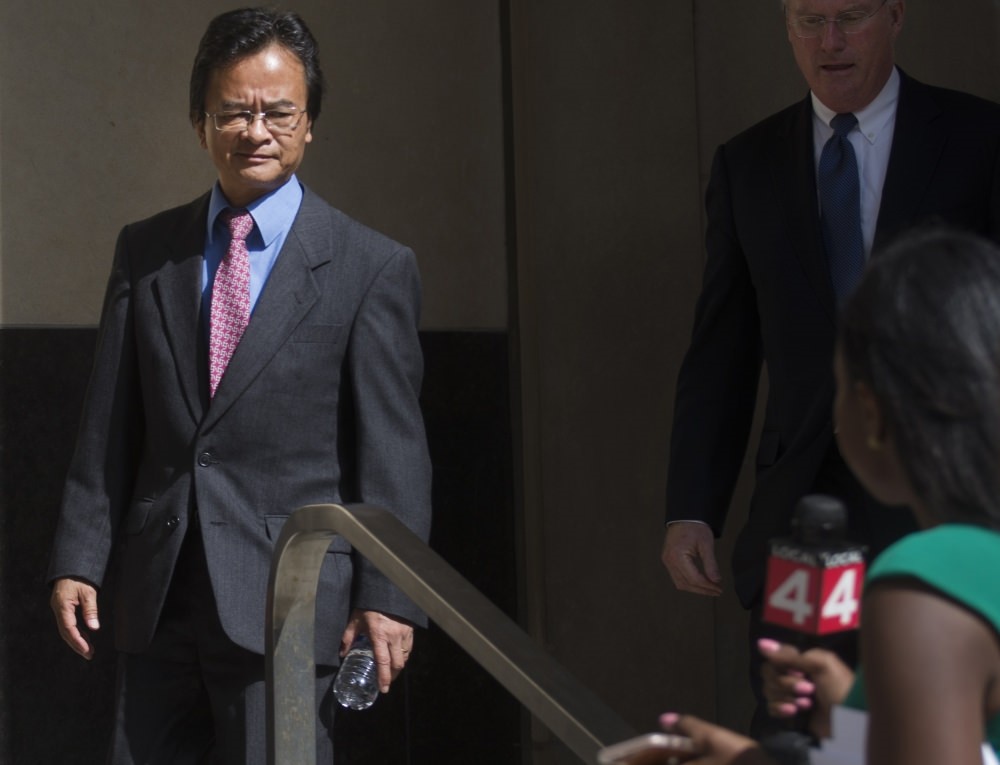 Volkswagen engineer James Robert Liang, left, leaves court in Detroit, after pleading guilty to one count of conspiracy in the companyu2019s emissions cheating scandal, Liang has agreed to cooperate in the widening criminal investigation.
by Sep 12, 2016 12:00 am
A Volkswagen engineer is expected to help the U.S. pursue its criminal case against the German automaker after pleading guilty to helping create the illegal emissions-cheating device installed on VW diesel cars. James Liang, 62, agreed to cooperate with US prosecutors developing a criminal case against Volkswagen, after he was indicted in Detroit federal court for his role developing the emissions "defeat devices" equipped on more than a half-million cars sold in the United States.

As an engineer in Germany, Liang helped develop the engines equipped the defeat devices from the earliest stages, said the indictment. He is the first official to be indicted in the U.S. in the now-global scandal involving 11 million diesel cars sold worldwide.

"Almost from the beginning of VW's process to design its new 'clean diesel' vehicles, Liang and his fellow co-conspirators designed these VW diesel vehicles not to meet U.S. emissions standards, but to cheat the testing process by making it appear as if diesel vehicles met U.S. emissions standards when, in fact, they did not," the Justice Department said in a 24-page indictment.

Liang worked on the defeat devices from November 2006 while at Volkswagen headquarters in Wolfsburg, Germany. He and other VW employees developed a complex software system to keep emissions low when a car was undergoing testing to demonstrate environmental compliance, but to allow them to spew higher emissions on the road while boosting fuel efficiency, the indictment said.

He moved to California in 2008 as Volkswagen ramped up its marketing of its ostensibly "clean diesel" cars with high fuel efficiency in an effort to win greater market share in the U.S.

His job title in the U.S. was "Leader of Diesel Competence," although he still reported to VW officials in Germany.

The indictment said Liang and others consistently misrepresented the system to federal and state environmental regulators and lied about the issue when regulators probed the discrepancy between the cars' testing and real-world emissions performance.

"Liang and his co-conspirators attempted to make it appear that there were innocent mechanical and technological problems to blame, while secretly knowing that the primary reason for the discrepancy was the defeat device installed in every VW diesel vehicle sold in the United States." He faces a maximum penalty of five years in prison and a fine up of to $250,000.

"I know VW did not disclose the defeat device to US regulators, in order to sell the cars in the U.S.," Liang said, according to Bloomberg News. "That's what makes me guilty."

A Volkswagen spokeswoman declined to comment on Liang's indictment, but said the company "is continuing to cooperate with the U.S. Department of Justice."

Liang's cooperation could accelerate the US criminal probe into VW, resulting in a large financial penalty, according to a person familiar with the government's thinking. One outcome could be a deferred prosecution agreement similar to those that resolved earlier criminal cases against General Motors and Toyota for $900 million and $1.2 billion. That would allow the company to escape criminal conviction as long as it complies with certain requirements in a deal with the justice department. Volkswagen settled civil cases in June over cheat devices on 2-liter engine diesel cars sold in the U.S. in an agreement valued at $14.7 billion that requires it to buy back or fix vehicles, and pay each owner up to $10,000. It still has to reach a similar deal for its cars with 3-liter diesel engines. Volkswagen has faced global condemnation since U.S. and California state regulators exposed the emissions-cheating conspiracy in September 2015. Some analysts have estimated the scandal could cost the company $30 billion or more.
RELATED TOPICS