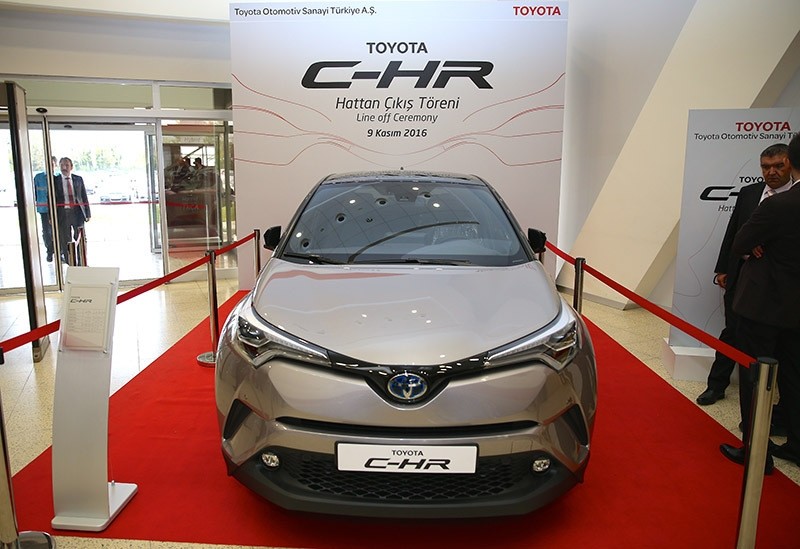 Production of the new Toyota C-HR Crossover has officially begun on Wednesday at the Toyota Motor Manufacturing Turkey (TMMT) production headquarters in the northwestern province of Sakarya.

The C-HR Crossover is the first hybrid-powered vehicle to ever be produced in Turkey and makes up 60 percent of production capacity according to TMMT CEO Hiroshi Kato, while the remaining 40-percent capacity will be allocated to Corolla and Verso Toyota models.

The manufacturing plant is expected to produce up to 280,000 vehicles per year, 65 to 70 percent of which will be exported. Roughly 90 percent of the C-HR series will also be exported.

Noting that TMMT produces high-quality automobiles and that the Toyota base in Turkey was established on trust, CEO Kato said that TMMT is one of the best automotive manufacturing plants in Europe and worldwide.

"Our company will become one of Turkey's leading exporters with the production of the Toyota C-HR," Kato said.

TMMT is expected to gradually expand its export markets to include countries outside of Europe, like North America, between January and February 2017.

On the other hand, Toyota Europe CEO Dr. Joan van Zyl said that Toyota's crossover segment is rapidly expanding and forming the base of their global strategy.

"By 2020, one out of every two vehicles sold in Europe will be hybrid cars, according to our plan," van Zyl stated.