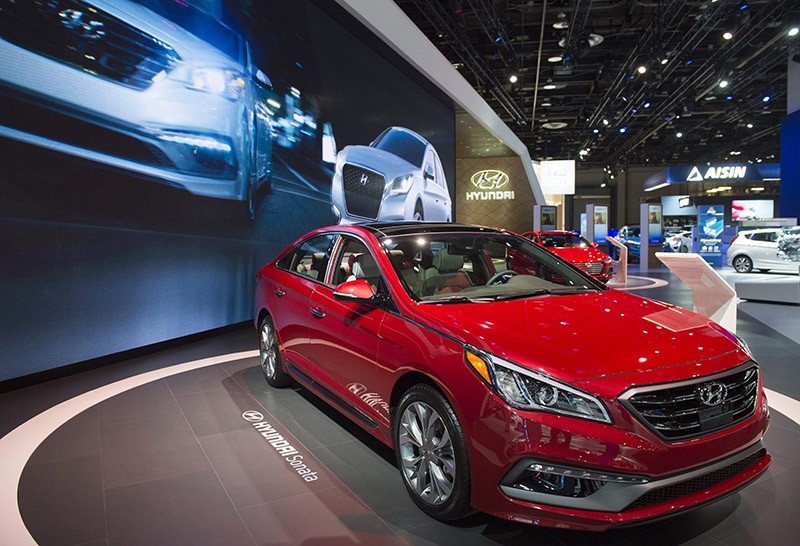 Hyundai Motor Co. reported Wednesday a 39 percent drop in its fourth-quarter income to the lowest level in seven years, hit by weak demand in South Korea, the United States and key emerging markets and higher costs from strikes and sales incentives.

The South Korean automaker said its October-December net profit was 1 trillion won ($859 million), compared with 1.6 trillion won a year earlier, which is its 12th consecutive quarter of profit downturn.

It was also lower than the previous quarter, when Hyundai recorded its smallest profit since the first quarter of 2010 after adopting international financial reporting standards.

The company blamed a July-September strike that pushed up production costs and cost the company 95,400 vehicles worth of output. Lower car sales in South Korea also hurt. Tens of thousands of workers at the firm's plants in South Korea staged strikes for several weeks demanding higher wages.

Hyundai Motor's slowness to respond to the growing popularity of sports utility vehicles while demand for its mainstay sedans has declined has hit sales in its key markets. In South Korea, fourth-quarter car sales fell 6 percent over a year ago while in the United States, sales dropped 14 percent.

Annual sales fell in South Korea as buyers flocked to imported Toyotas and Volkswagens instead of Hyundai's Sonata and Genesis sedans.

Hyundai raised its incentives for car buyers and increased spending on marketing of its premium Genesis brand, increasing overall costs.

The company said it plans to increase its production of sports utility vehicles, such as Santa Fe and Tucson, in the United States and China this year.

The company predicted a tough business environment in the U.S. car market this year and said interest rate hikes could hurt the auto finance market.

Hyundai and its sister company Kia Motors Corp. are the world's fifth-largest automaker. They operate production lines in Georgia and Alabama.

Before U.S. President Donald Trump's inauguration, Hyundai announced the automotive group plans to invest $3.1 billion in the U.S. for research and development and maintaining its factories in the next five years.

Despite the weak profit, Hyundai Motor kept its dividends at the same level as last year and announced its mid- to long-term dividend plan for the first time. It said it will increase dividends to 30 to 50 percent of its annual free cash flow, more than doubled from its previous levels.

Shareholders have been pushing for higher returns and more transparency after Hyundai won a 10.6 trillion won ($9.1 billion) bid to purchase real estate in Gangnam, southern Seoul in 2014. Since then the company has sought to appease shareholders by setting up an independent committee to convey minority shareholders' opinions to management.