Toyota, Suzuki to work together on green, safety technologies 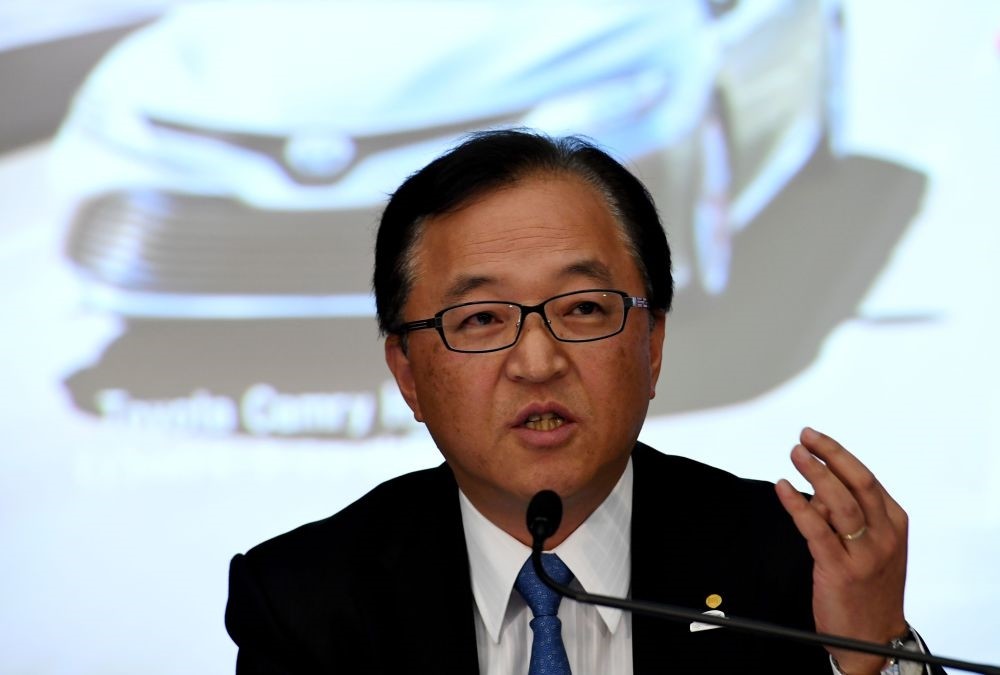 Toyota Motors Managing Director Tetsuya Otake answers a question during the company's earnings press conference at their Tokyo headquarters on Feb. 6.
by Associated Press Feb 07, 2017 12:00 am

With emission regulations tightening around the world and developing futuristic technology being costly, Toyota and Suzuki will work together on ecological, safety and information technologies

Japanese automakers Toyota and Suzuki, which began discussing a partnership in October, said yesterday they would work together in ecological and safety technology - a rapidly growing area in the industry. Toyota Motor Corp., the maker of the Camry sedan, Prius hybrid and Lexus luxury models, and Suzuki Motor Corp., which specializes in tiny cars, announced the decision, following approval by the company boards, and signed a memorandum of agreement, both sides said. Another area for possible collaboration is information technology as well as supplying each other with products and components. The next step would be to come up with specific cooperation projects, they said. Suzuki does not have a hybrid, electric car or fuel cell vehicle in its lineup. Self-driving cars are also a growing focus in the industry. Toyota President Akio Toyoda praised Suzuki's pioneer spirit.

"I am truly thankful for having been given this opportunity to work together with a company such as Suzuki, which overflows with the spirit of challenge. Toyota looks forward to learning much," he said in a statement. Developing futuristic technology is costly, and the automakers can hope to reduce costs by working together. Toyota and Suzuki have encouraged others to join the partnership.

"We now stand at the starting point for building a concrete cooperative relationship. I want to give this effort our fullest and to aim at producing results that will lead Toyota to conclude that it was the right thing for Toyota to have decided to work together with Suzuki," said Suzuki Chairman Osamu Suzuki. Suzuki said the company had courted Toyota on such a partnership for years. Toyota leads the world in selling gas-electric hybrids, headed by the Prius, and it is also working on fuel cells and electric vehicles. Emissions regulations are tightening around the world, amid growing concerns about the environment and global warming.

Meanwhile, Toyota Motor Corp. said yesterday that its profit fell 23 percent in the October-December quarter from a year earlier as its sales fell and a stronger yen bit into its overseas earnings. The company, which recently relinquished the crown of world's biggest automaker to German rival Volkswagen, reported its fiscal third quarter profit was 486.5 billion yen ($4.3 billion), down from 627.9 billion yen in 2015. Quarterly sales of the maker of the Prius hybrid, Camry sedan and Lexus luxury cars slipped 3.5 percent to 7.1 trillion yen ($63 billion). A strong yen reduces the foreign-earned income of Japanese exporters when translated into yen. In its report for October-December, Toyota used an exchange rate of 109 yen to the dollar, compared with a rate of 121 yen a year earlier. During the quarter, the yen actually weakened against the dollar, which was trading at 102 yen in early September but ended the year at about 117 yen. The change from 2015-2016 cost the company 205 billion yen ($1.8 billion) in quarterly operating profit, Toyota said. It raised its full year profit forecast through March 2017 to 1.7 trillion yen ($15 billion), noting it expects more favorable exchange rates. The forecast is better than its earlier projection of 1.6 trillion yen ($14 billion) profit, but below the 2.3 trillion yen earned in the previous fiscal year.
RELATED TOPICS