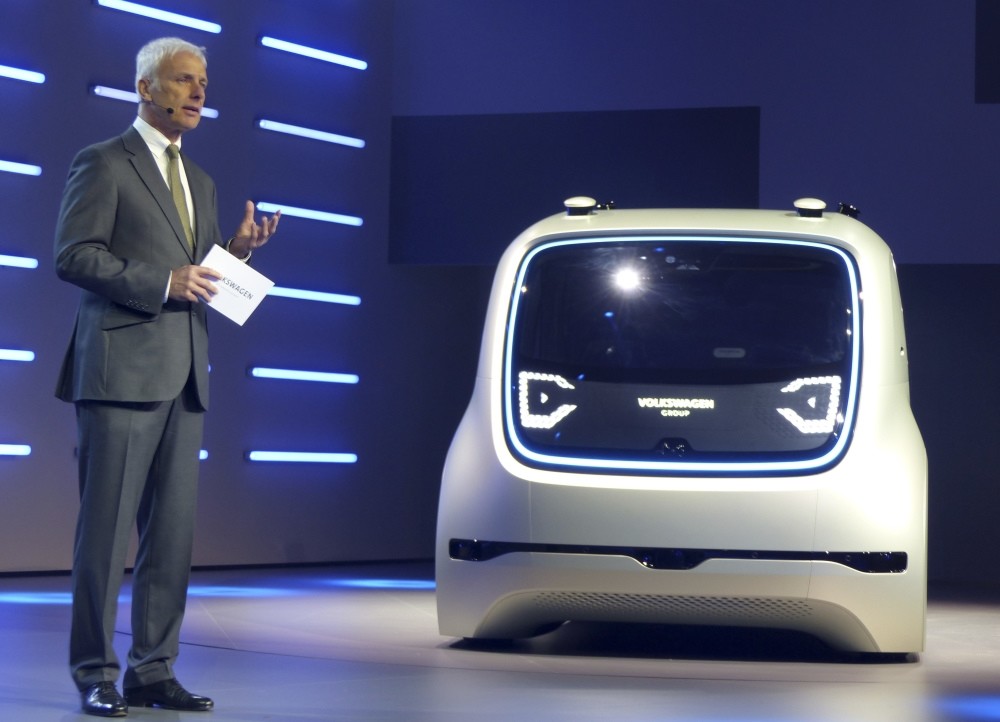 Volkswagen CEO Matthias Mueller presents a Sedric Concept car during a Volkswagen event prior to the 87th Geneva Auto Show in Switzerland.
by reuters Mar 08, 2017 12:00 am

The auto industry is facing seismic changes with the rise of electric vehicles, automated driving and car sharing, and adapting to these will eclipse even big mergers such as PSA's purchase of Opel, according to the executives at the Geneva auto show

Peugeot maker PSA Group on Monday agreed to buy loss-making Opel from General Motors, creating Europe's second-biggest carmaker behind Volkswagen and sparking speculation of more consolidation. However, some executives gathering in Geneva said the deal was unlikely to change the industry landscape on its own, withnew competitors in Silicon Valley and China and changing consumer habits set to have a much bigger impact.

"We are really in a transitionary phase for the industry.There are new competitors on the horizon like Tesla or Chinese ventures," Herbert Diess, the head of Volkswagen's (VW) main passenger car division, told reporters.

"My feeling is that the industry as a whole and brand positioning will change in the next 10 or 15 years and that comes in addition to traditional consolidation in the industry,"he said, adding he did not expect a wave of Opel-style deals. Volkswagen (VW) is investing billions of euros in electric vehicles, automated driving and new mobility services, in part as it tries to recover from an emissions test cheating scandal on diesel engines which has hit demand for diesel vehicles. The company is unveiling a fully self-driving concept car at the Geneva show. Karl Schlicht, head of European sales at Japan's Toyota Motor Corp, also played down the impact of the PSA-Opel deal, which brings together two carmakers with heavy focuses on diesel and low-margin fleet vehicles, respectively.

"We ran a counter strategy in Europe which may not look as successful for some past years because our volumes were a bit lower, but in terms of where we want to end up, it's turning out to be a good strategy," he said, referring to Toyota's investments in hybrid vehicles. The company forecasts its European sales will rise 5 percent this year, compared with an industry expected to grow 1 percent. Some industry analysts also say an enlarged PSA could actually ease the pressure on rivals if CEO Carlos Tavares uses similar methods to turn around Opel that worked at PSA. Exane's Dominic O'Brien, for example, sees Opel "adopting more disciplined pricing strategies akin to PSA's current model."

In the three years since Tavares took the helm at PSA, its three existing brands - Peugeot, Citroen and DS - have significantly increased pricing relative to bench marked peers, sometimes at the expense of sales. A similar approach at Opel, which has been among the region's most aggressive discounters, could give the entire European mass-market car industry some breathing space.

Stefan Bratzel of the Center of Automotive Management in Bergisch Gladbach, Germany, said it was the potential improvement in profitability at PSA-Opel that posed a bigger challenge to rivals than its sheer size.

"There is no survival of the fattest," he said. "Just because you're big, you do not win the game."
RELATED TOPICS