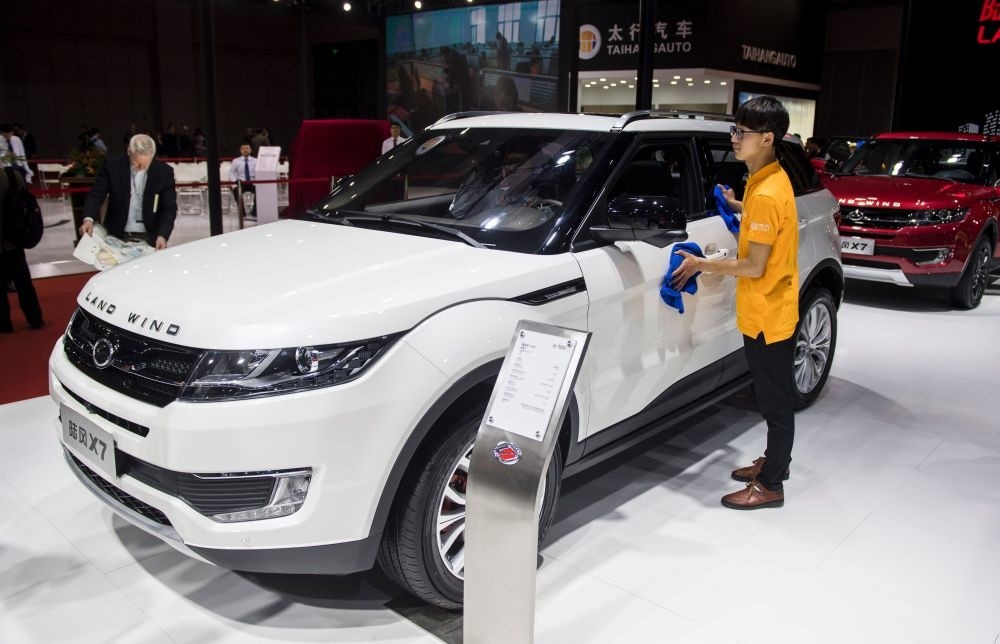 A X7 car by Chinese carmaker Land Wind pictured during the media day of the 17th Shanghai International Automobile Industry Exhibition in Shanghai.
by French Press Agency - AFP
Apr 22, 2017 12:00 am

If imitation is the sincerest form of flattery, then global carmakers are basking in the compliments at Shanghai's auto show, where some Chinese-made models bear striking resemblances to famous foreign brands. The annual exhibition is the biggest automotive showcase in the planet's largest car market, but also an event that revives persistent accusations of Chinese businesses copying foreign designs.

The show opened this week with automotive media and internet wags highlighting a range of Chinese models with more than a passing likeness to their Porsche, Land Rover, Mercedes and other counterparts. Intellectual-property theft is rampant in a range of industries in China, and foreign automakers have taken legal action over the years against Chinese competitors for suspiciously similar designs. But Mercedes' China boss Hubertus Troska laughed it off when asked by reporters about a Chinese-made car on display across from the Mercedes stand which looked just like the German manufacturer's G-Class SUV.

"We take it as a compliment," Troska quipped. Other automotive doppelgangers include one by little-known Chinese brand Zotye which sells for 100,000 yuan ($14,500) and could be mistaken for Porsche's sporty Macan SUV, which has a sticker price of $87,000.

A Porsche spokeswoman brushed it off, stressing that foreign automakers compete for different market segments and income levels than their Chinese counterparts.

"We are absolutely sure that car enthusiasts will easily be able to tell the difference between the original Porsche Macan and the copycat due to design, perfection and overall quality," said Anja Wassertheurer, Porsche's director of product and technical communications. Land Rover's Range Rover Evoque SUV is also on display in Shanghai, as is a model by similarly-named Chinese carmaker Landwind that has sparked a legal battle between the two.

The British manufacturer in 2014 launched a bid to void Landwind's patent on its X7 SUV, prompting a tit-for-tat move by the Chinese company in a fight that is continuing. The chances of a foreign carmaker winning an auto patent case in China are "extremely low" due to the way the country's patent laws are written, said Li Yanwei, an analyst with the China Automobile Dealers Association.

"A conviction can only be made when the two vehicles' design and size match exactly," he said. "Companies like Zotye only need to slightly adjust some parameters and the other brand won't be able to win."

Global automakers largely have to just accept such mimicry and focus on the fact that they compete for different buyers.

Honda filed a lawsuit in 2004 against Chinese carmaker Shuanghuan Automobile, accusing it of copying the exterior of the Japanese manufacturer's popular CR-V SUV, but lost the case in 2015. Industry watchers say the number of such disputes is expected to diminish as Chinese manufacturers' design capabilities grow.