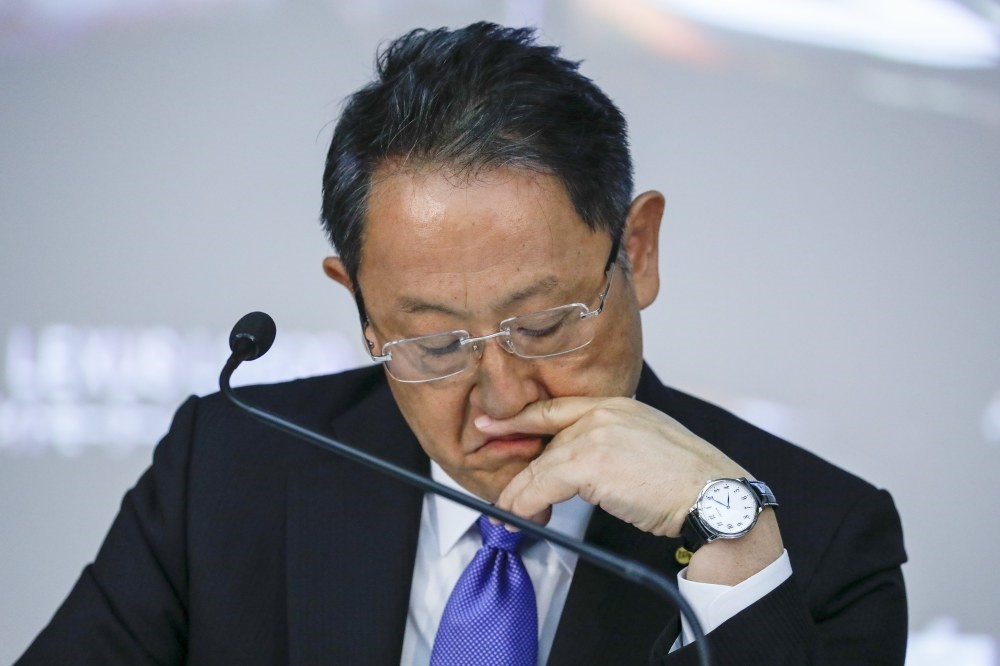 Akio Toyoda, President of Toyota Motor Corp., looks at his files during a press conference announcing the company's financial results.
by Associated Press
May 11, 2017 12:00 am

Japanese carmaker reported its first drop in annual net profit in five years, while it unexpectedly warned that earnings would fall again owing to pricey U.S. customer incentives and a forecast pickup in the yen

Toyota's profit fell 6.6 percent in the fiscal fourth quarter as an unfavorable exchange rate offset better sales, but its president said yesterday that the company was merely investing in the future. Toyota Motor Corp. reported a 398.4 billion yen ($3.5 billion) January-March profit, down from 426.6 billion yen in the same period last year. Quarterly sales rose nearly 7 percent to 7.44 trillion yen ($65.3 billion). Toyota, which makes the Prius hybrid, Camry sedan and Lexus luxury models, is projecting a 1.5 trillion yen ($13.2 billion) profit for the current fiscal year, down from 1.8 trillion yen ($16 billion) in the year that ended March 31, anticipating that a strong yen and marketing costs will erode earnings.

That was down 21 percent from the fiscal year that ended in March 2016, its first annual profit drop in five years, thanks to a stronger yen. The last time Toyota's annual profit dropped was after the 2011 tsunami and quake disasters in northeastern Japan damaged its supply chain. Toyota President Akio Toyoda told reporters the results reflect the currency effect and obscure the broader picture.

In fiscal 2016, a dollar cost about 120 yen. It averaged 108 yen for the fiscal year that just ended. Toyota expects the dollar to trade at about 105 yen this fiscal year. It was trading at about 114 yen as of yesterday.

Toyoda stressed the company has been investing in a new system for developing and making cars around the world that it calls the Toyota New Global Architecture. It's aimed both at saving costs and also at maintaining quality and catering to various global customer needs.

"Until now, there were times when Toyota's cars were called 'boring' or were said to be lacking in character. But I now feel that, in terms of driving and design, our customers have begun to favorably evaluate our cars," he said.

Like other automakers, Toyota is investing in future technology such as artificial intelligence, autonomous driving, robotics and connected systems, he added. The company expects vehicle sales to drop in Japan, North America and Europe in this fiscal year but to grow in emerging markets. Lagging auto sales in the U.S., a lucrative market, hurt Toyota's bottom line for the fiscal year that just ended. But sales were strong in China, partly because of a sales tax cut on small cars, it said. Toyota said it expects to sell 10.2 million vehicles in the current fiscal year, on a par with the year that ended March 31.

Toyota was the world's No. 2 automaker last year in global vehicle sales after Volkswagen AG, the first time the German automaker was No. 1. Toyota had that title for four years from 2012, having seized it from long-time industry leader General Motors in 2008, apart from its setback in 2011.