After progress in employment drive, eyes on 'Made in Turkey' car 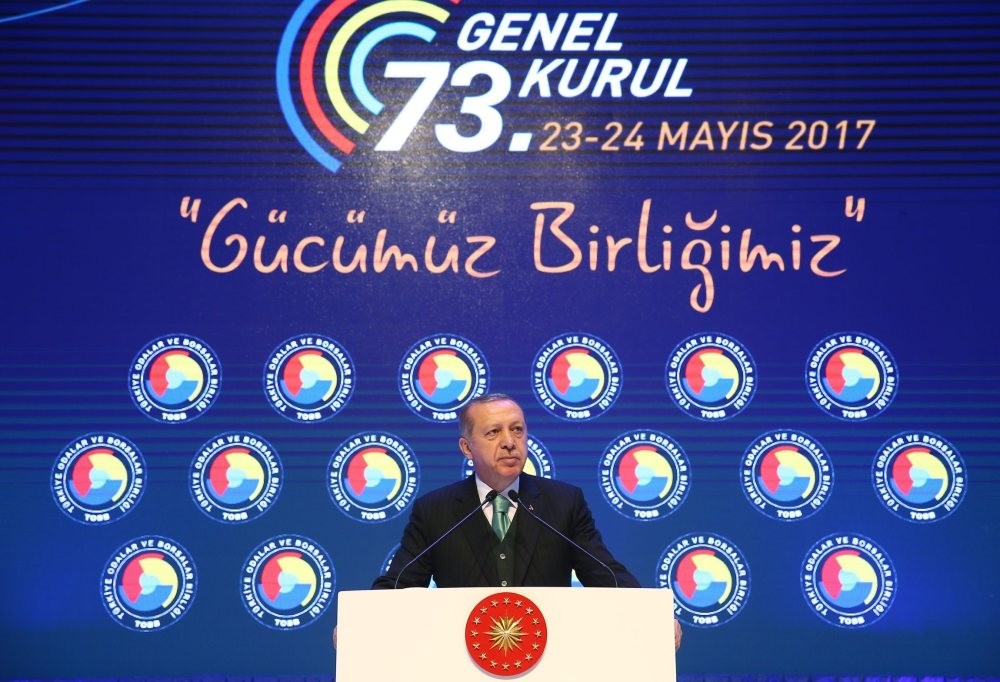 In his address to the TOBB members, President Erdou011fan reiterated his call to the business people for the manufacture of an local automobile.
by daily sabah May 25, 2017 12:00 am

In February, Turkey commenced a mobilization campaign led by President Erdoğan to increase the employment rate and it has so far been a success, creating 1.17 million jobs. Now, the country has taken up another mobilziation effort, envisioning manufacturing fully domestic automobile

In early February during a speech he delivered at a meeting of the Turkish Union of Chambers and Commodity Exchanges (TOBB), President Recep Tayyip Erdoğan initiated a mobilization campaign to boost Turkey's employment rate and generate more job opportunities. The campaign has borne fruit and produced 1.17 million jobs so far, the president announced yesterday at another TOBB meeting, where he also reiterated his call for a "Made in Turkey" automobile. President Erdoğan attended the 73rd Ordinary General Assembly Wednesday, which was held at the TOBB University of Economics and Technology. A discussion was staged on a number of topics, including the manufacture of a domestic automobile, the elimination of bureaucratic burdens on the business world, and high interest rates.

Underscoring the issue of a domestically manufactured automobile on a number of other occasions, such as last week's TÜSİAD High Consultation Meeting, Erdoğan reiterated his call for a "Made in Turkey" automobile in his address to Turkish businesspeople at the 73rd TOBB Ordinary General Assembly.

"I hereby call the members of Turkish Union of Chambers and Commodity exchanges to manufacture a fully indigenous, 'Made in Turkey,' automobile," the president said. The TOBB chair replied and expressed his willingness to take up the initiative.

Recalling that he has urged business people in the automobile industry many times over the last 15 years to manufacture a fully indigenous automobile, the president projected a critical perspective on the assembly line manufacture where automobile parts are sent to Turkey from abroad and assembled at Turkish factories.

"Assembly line manufacturing does not suit this nation. Automobile parts are only bought in from abroad, assembled here and then released to the market. Now this nation has the intellect and products to undertake this initiative. Securing the promise, we will aim to manufacture a fully domestic, 'Made in Turkey' automobile under the TOBB. And as the state, we will perform our due part," Erdoğan noted.

"There are complaints about high interest rates everywhere. As president I have always kept this issue on my list. Because I see high interest as a tool of exploitation. It's not a mentality for profit but for exploitation," he said.

Erdoğan has been outspoken in advocating the idea that lenders and Turkey's Central Bank bring down interest rates.

The president predicted that by the year 2035, Turkey's population will exceed 90 million, putting it into the upper echelons of countries by population, and that it will maintain its power.

"The most important thing is that we will utilize this population in the most effective way by joining the world's top 10 economies," he said, adding that they are determined that Turkey's young, educated, and dynamic population will be the engine of the country's economic growth.

Erdogan said that, by 2035, Turkey will take its place among the world's most prosperous countries after per capita income rises above $25,000, and wealth will spread across Turkey, reducing income inequality.

In addition, he stressed that they should make Turkey a global hub for information technology, energy, transportation, logistics, and trade by combining economic breakthroughs with new investment opportunities.

During his address, the president emphasized the importance of working together as a nation to accomplish the goals and strengthening as well as upgrading the country's position in the League of Nations, which is reflected in the employment mobilization campaign.

Recalling that the employment mobilization campaign he launched on Feb. 7 has garnered widespread support from Turkish businessmen, Erdoğan announced that 1.17 million jobs have been created since the campaign launch.

Turkey must rid itself of bureaucratic burdens

Another topic President Erdoğan elaborated on and labeled as an issue to be resolved was bureaucracy.

Erdoğan explained that he visits with businesspeople abroad as many times as possible and carries out negotiations with them whenever possible.

Saying he closely follows the matters brought up by the members of the business world, he suggested that bureaucracy be eliminated in collaboration with businesspeople.

"Once determined, we will destroy this oligarchical structure all together," he said, in a bid to emphasize his decisive matter to ease the bureaucratic procedures during business operations.

The elimination of bureaucratic hurdles at the administrative level was a pledge that the government and the 'Yes' campaign made during the April 16 referendum period. Both the business circles, ministers and bureaucrats themselves who administer Turkey's investment environment reiterated the necessity for less bureaucracy that hinders the decision-making processes, particularly for business operations.

Now, almost one-and-a-half months after the referendum, the top level of the government and the president himself reiterated their determination to wage war on the oligarchical bureaucracy, almost derailing the country's investment environment.

Devrim (meaning 'revolution' in Turkish) was perhaps a glimmer of hope in Turkey during the early 1960s. It was the symbol for a dream to produce a fully indigenous automobile.

On June 16, 1961, the president of the Turkish Republic, Cemal Gürsel, stated a mission to develop an automobile to meet the needs of the Turkish Army to have 'street cars.' The mission was addressed to the National Railways of the Turkish Republic (TCDD). A team was commissioned and the car was designed and manufactured in a short time with some difficulties encountered during the design of engine and gearbox.

Despite the technical difficulties and political problems, Devrim was showcased on Oct. 29, 1961 (on the 38th anniversary of the foundation of the Republic of Turkey) and then drove off to take President Cemal Gursel to the Anıtkabir (the Mausoleum of Atatürk).

Again in early 1960s, Koç Holding proposed to the Turkish government that a Turkish car brand should be established, up to that point only kit assembly operations existed in the country. The government accepted the project and the automobile was named "Anadol" after the Anatolia region of Turkey, and the name was chosen by members of the public in a national competition.

The Anadol body shells were made in the U.K. and shipped to Turkey for assembly, where they were basically mounted on to the running gear and a 1.2-litre engine of the contemporary Ford Cortina. Initially a two-door, a four-door model was later added, as well as bigger engines, and the basic design survived until 1984. Along the way, there was also a neat coupe called the STC-16, which resembled a 1970s Datsun 240Z, and a utilitarian chassis-cab pick-up version. The Anadol was a success; more than 100,000 were built in its 18-year run. Yet, it was not an indigenous production except for its name.