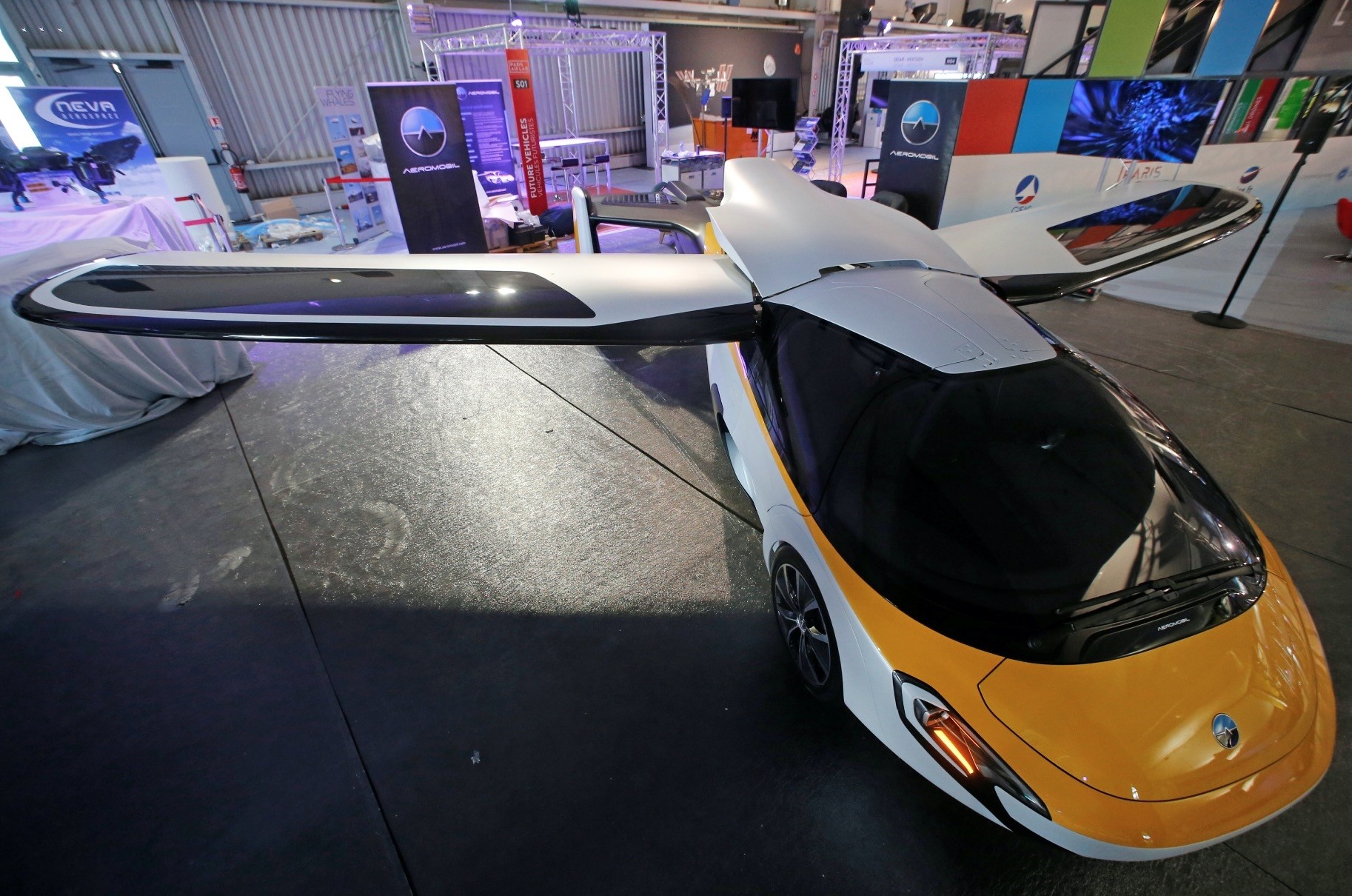 A flying car developed by AeroMobil, able to fly at a height of 3048 meters and a distance of 700 kilometers is seen on static display, before the opening of the 52nd Paris Air Show at Le Bourget Airport near Paris.
by Jun 19, 2017 12:00 am

After years of testing, the PAL-V company is poised to start production on what they bill as a world first: A three-wheeled gyrocopter-type vehicle which can carry two people and will be certified for use on the roads and in the skies

From "The Jetsons" to "Chitty Chitty Bang Bang," flying cars have long captured the imagination. While several futuristic projects are under way in different countries, a Dutch design may be the first one sold and soaring into the skies. After years of testing, the PAL-V company aims to pip its competitors to the post. It is poised to start production on what they bill as a world first: A three-wheeled gyrocopter-type vehicle which can carry two people and will be certified for use on the roads and in the skies."This kind of dream has been around for 100 years now. When the first airplane was invented people already thought 'How can I make that drivable on the road?'" chief marketing officer Markus Hess told AFP.

The Personal Air and Land Vehicle (PAL-V) firm, based in Raamsdonksveer in the Netherlands, is aiming to deliver its first flying car to its first customer by the end of 2018. The lucky owner will need both a driving license and a pilot's license. But with the keys in hand, the owner will be able to drive to an airfield for the short take-off, and after landing elsewhere drive to the destination in a "door-to-door" experience. Different versions of a flying car are being developed in the Czech Republic, Slovakia, Japan, China and the United States. But final assembly on the PAL-V will start in October, with the company seeking to be the first to go into commercial production. The PAL-V uses normal unleaded petrol for its two 100-horsepower engines, and can fly 400 to 500 kilometers (248 to 310 miles) at an altitude of up to 3,500 meters (11,500 feet). On the road it has a top speed of around 170 kilometers an hour.

PAL-V was founded in 2007 by Robert Dingemanse and pilot John Bakker.

"In the beginning it was, let's make a gyrocopter drivable," said Hess.

But the company, which has some 40 to 50 employees, realized the weight and length of a gyrocopter's blades gave the vehicle a high center of gravity when driving, especially taking corners. They have designed the car so at the flick of a button the blades fold down and gather like a bat's wings on the top. And they have incorporated into the car a 2005 breakthrough - when the Dutch company Carver invented a tilting system for three-wheelers - to counter the high center of gravity and make it roadworthy.

The company insists the PAL-V is not a helicopter, in which the blades are powered by an engine. It is a gyroplane, in which the blades rotate thanks to airflow. Even if both engines cut out, the blades will still turn, so "even if you go at zero speed it still keeps rotating and you are not going to drop out of the sky," said Hess.

While he refused to divulge how many orders they have, he said the company "was more than satisfied."

Clients put down a non-refundable deposit of 10,000 to 25,000 euros depending on the model. A third option is to put 2,500 euros into an escrow account, which secures them a place in the line.

"In some senses we are selling a dream," Hess said, standing next to the sleek, black first model developed in 2012 which has already put in "substantial hours" of flying and driving time.

Parts are on order, with the first already in stock. Once built, the vehicle will have to complete at least 150 flying hours, and undergo extensive tests to receive its certification from the Cologne-based European Aviation Safety Agency (EASA). Hess defended the hefty price tag. It's not a lot more than "a super-duper sports car with a few extras," he said.

"Considering the extra certification standards we have to go through for aviation, and that a super-duper sports car can't even fly, we think it's actually a bargain."

The PAL-V staff know many inventors in other countries also developing flying cars, but remain unconcerned by the competition. And Hess laughs when asked whether the skies will become too crowded.

People at first "cannot even imagine flying cars. Then suddenly when they start imagining it, they see millions of flying cars in the air."

That new reality, for the time being, is still a long way off, he said.