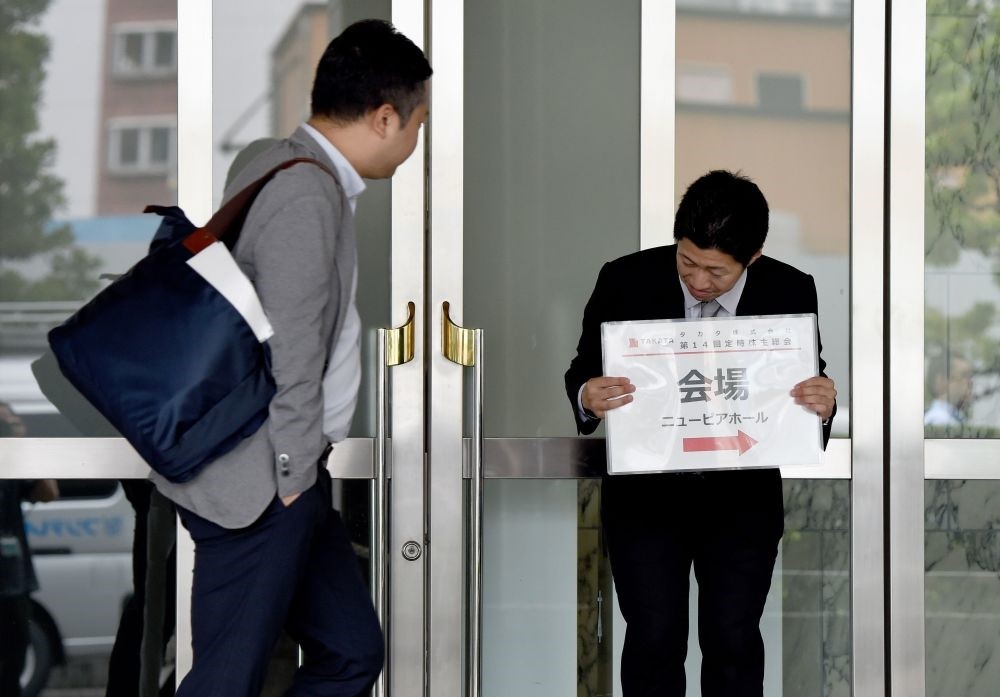 A staff member (R) holds a placard guiding shareholders to the venue of the annual shareholdersu2019 meeting of Japanu2019s crisis-hit car parts maker Takata in Tokyo.
by Jul 18, 2017 12:00 am

The global recall of Takata Corp's defective air bags widened last week and the number of confirmed deaths rose, but legal experts said the bigger worry for car companies caught in the fallout is playing out in a Delaware bankruptcy courtroom. Earlier this month, people injured by the air bags, which degrade over time and can inflate with excessive force, were appointed to their own official committee in the Japanese company's U.S. bankruptcy, giving them a powerful voice in the proceedings. This unusual committee, which includes people whose cars lost value due to the recall, will be pitted against Honda Motor Co, Toyota Motor Corp, and other automakers. The car companies have been trying to use the bankruptcy to limit their liability for installing the faulty air bags, said Kevin Dean, a Motley Rice attorney who represents injured drivers on the committee.

Because the committee has official status, Takata must provide it with funds which can be used to investigate the automakers' liability or to challenge financial assumptions. Without a committee, plaintiffs' lawyers would typically have to pay for that themselves.

"If I were a plaintiffs' lawyer, this would be a golden goose for me," said John Pottow, a professor at the University of Michigan Law School, of the appointment of the special committee.

Bankruptcies typically only have one official creditors committee. In the Takata case, the committee of injured drivers will sit alongside another made up of suppliers and vendors, who are likely more interested in the future of the business than compensation disputes, according to bankruptcy attorneys who are not involved in the case. Both committees were appointed by the U.S. Trustee's Office, the arm of the U.S. Department of Justice that acts as a bankruptcy watchdog. Seventeen fatalities, including one confirmed last week, and at least 180 injuries have been tied to Takata's air bags since at least 2009.

Last week, the National Highway Traffic Safety Administration widened a global recall of the airbags, which regulators expect to ultimately cover 69 million cars and 125 million inflators. Most defective air bags have not been replaced. In January, Takata entered a settlement with the U.S. Department of Justice, setting aside $125 million to compensate consumers and $850 million in restitution for automakers. Facing up to $50 billion in liability, Takata filed for bankruptcy in June in Japan and the United States with a plan to sell its non-air bag operations for $1.6 billion to Key Safety Systems, which is owned by China's Ningbo Joyson Electronic Corp . Its air bag business would continue to make replacements for the 125 million recalled inflators.