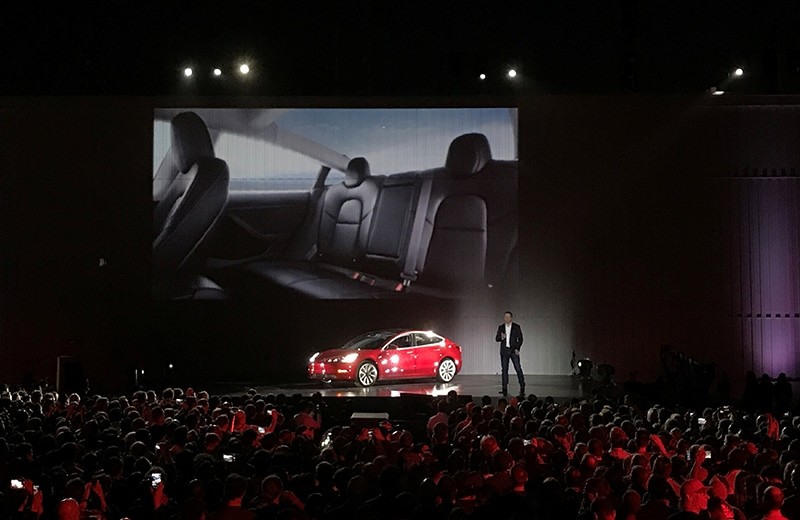 Tesla Chief Executive Elon Musk introduces one of the first Model 3 cars off the Fremont factory's production line during an event at the company's facilities in Fremont, California, U.S., July 28, 2017. (Reuters Photo)
by Associated Press Aug 03, 2017 12:00 am

However, Musk tried to calm jittery investors, assuring them it can meet aggressive production targets for the Model.

Tesla CEO said investors should have "zero concern" about whether Tesla will be able to make 10,000 Model 3s per week by next year. Tesla just delivered the first 30 Model 3s to employees last week.

"This is maybe the best I've ever felt about Tesla, to be frank," Musk said on a conference call with analysts and media.

That — along with a lower-than-expected net loss in the second quarter — sent Tesla's shares soaring. They were up almost 8 percent to $351.12 in after-hours trading.

Musk worried investors last week when he warned that Tesla was about to embark on "at least six months of manufacturing hell" as it tried to get Model 3 production to 5,000 cars per week by December. On Wednesday, Musk said there's always a risk of machines breaking down or suppliers not coming through, but he doesn't expect significant changes to that plan.

"We know this. We signed up for it. I'm not blaming hell because we bought the ticket," he said.

Tesla burned through $1 billion in the second quarter preparing for the Model 3's arrival. It opened 29 new stores and service centers, and it's also planning to double the number of fast-charging Supercharger outlets this year to 10,000 worldwide. Tesla ended the quarter with $3 billion in cash.

Palo Alto, California-based Tesla said its net loss grew 15 percent to $336 million in the April-June period. But its adjusted loss of $1.33 per share handily beat Wall Street's forecast of a $1.88 loss per share, according to analysts polled by FactSet.

Tesla saw significant growth in its energy generation and storage business, which contributed about 14 percent of its revenues. Tesla bought solar panel maker SolarCity late last year. The company began taking orders for its new solar roof tiles in the second quarter and has begun installations at the homes of employees, including Musk. Tesla also was selected last month to build a giant power storage system in South Australia.

But most attention was focused on the Model 3. In some cases, customers may have sprung for one of the company's more expensive products. Musk said Tesla is still seeing strong demand for the Model S sedan and Model X SUV, with deliveries of 22,026 vehicles in the second quarter. That was up 53 percent from the same quarter a year ago. Deliveries were down slightly from the first quarter, but Tesla blamed a shortfall in batteries for the slower pace.

"One of our big concerns was that Model S and Model X would suffer with the introduction of the 3, but this has turned out to be the opposite," Musk said.

Tesla said it expects to begin deliveries to non-employees in the fourth quarter. Overseas deliveries will start in late 2018.

Some analysts have expressed doubt Tesla can meet its goals. The company has never made more than 100,000 cars in a year, and its last two models faced significant delays and production problems.

"There are walls moving all around that can all impede the success of the Model 3," said Karl Brauer, the senior director of content and executive publisher for Cox Automotive.

But Musk insists the company learned a lot from its past vehicles and has made the Model 3 simpler and easier to build. To illustrate that, he confirmed another cost-saving move: An upcoming SUV — dubbed the Model Y — will share underpinnings with the Model 3 so it can go on sale more quickly. Musk had earlier said that the SUV, due out in about two years, would have its own platform.