Toyota, Mazda consider joint venture for $1.6B worth US plant, electric vehicles 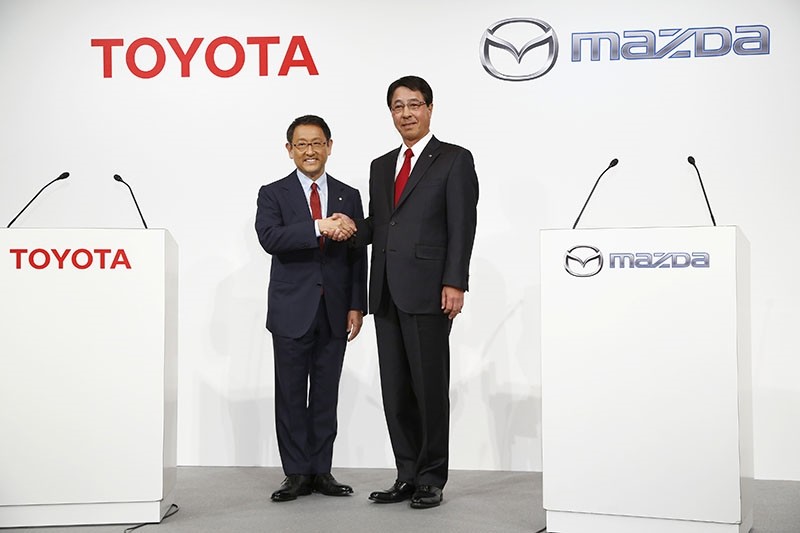 Japanese automakers Toyota Motor Corp. and Mazda Motor Corp. said Friday they plan to spend $1.6 billion to set up a joint-venture auto manufacturing plant in the U.S. — a move that will create up to 4,000 jobs.

The plant will have an annual production capacity of about 300,000 vehicles, and will produce Toyota Corollas for the North American market. Mazda will make cross-over models there that it plans to introduce to that market, both sides said.

The companies will split the cost for the plant equally.

Toyota said that it changed its plan to make Corollas at a plant in Guanajuato, Mexico, now under construction, and instead will produce Tacoma pickups there.

President Donald Trump had criticized Toyota for taking auto production and jobs to Mexico. With the investment, both automakers can hope to prove their good American corporate citizenship and appease the Trump administration's concerns about jobs moving overseas.

The companies will also work together on various advanced auto technology, such as electric vehicles, safety features and connected cars, as well as products that they could supply each other, they said.

Toyota will also acquire 31,928,500 shares of common stock newly issued by Mazda through a third-party allotment, which will amount to a 5.05 percent stake in Mazda, valued at 50 billion yen ($455 million).

Mazda, which makes the Miata roadster, will acquire 50 billion yen worth of Toyota shares, the equivalent of a 0.25 percent stake. The investment deal is expected to be final by October, the companies said.

"It has also sparked Toyota's competitive spirit, increasing our sense of not wanting to be bested by Mazda. This is a partnership in which those who are passionate about cars will work together to make ever-better cars," he said.

The companies said their collaboration will respect their mutual independence and equality. Toyota already provides hybrid technology to Mazda, which makes compact cars for Toyota at its Mexico plant.

The sheer cost of the plant also makes a partnership logical, as it boosts cost-efficiency and economies of scale. Working together on green and other auto technology also makes sense as the segment becomes increasingly competitive due to concerns about global warming, the environment and safety.

"Given the massive level of competition in the industry, partnerships are no longer a surprise," said Akshay Anand, an executive analyst at Kelley Blue Book.

Politics are another incentive.

"The new presidential administration has made it clear investments in the U.S. are a top priority, and this plant may be another nod to that mindset," Anand said.

Mazda President Masamichi Kogai said he hoped that the partnership will help energize the industry, by nurturing more car fans, as rivals come together for the shared goals of innovation and fostering talent and leadership.

Japanese rival Nissan Motor Co. is allied with Renault SA of France and Mitsubishi Motors Corp., and is the global leader in electric vehicles. Nissan-Renault became the top automaker in world vehicles sales for the first time in the first half of this year — underscoring how alliances can propel such groups into powerful leading positions.

Toyota is vying for the spot of No. 1 automaker in global vehicle sales against Nissan-Renault and Volkswagen AG of Germany, as the industry gradually consolidates.

The tie-up with Mazda, although still limited, marks the latest addition to Toyota's sprawling empire, which includes Japanese truck maker Hino Motors and minicar maker Daihatsu Motor Co. It is also the top shareholder in Fuji Heavy Industries, the maker of Subaru cars.

In the past, Toyota, which makes the Prius hybrid, Camry sedan and Lexus luxury models, was not overly bullish on electric vehicles, noting the limited cruise range of the technology. But recent breakthroughs in batteries allow for longer travel per charge.

Mazda, based in Hiroshima, Japan, used to have a powerful partner in Dearborn-based Ford Motor Co., which bought 25 percent of Mazda in 1979, and raised it to 33.4 percent in 1996. But Ford began cutting ties in 2008, and has shed its stake in Mazda.

Also Friday, Toyota reported its April-June profit was 613.0 billion yen ($5.6 billion), up 11 percent from 552.4 billion yen a year earlier. Quarterly sales rose 7 percent to 7.05 trillion yen ($64 billion), as vehicle sales improved around the world, including in the U.S., Europe and Japan.