Hyundai caught up in political row between South Korea and China 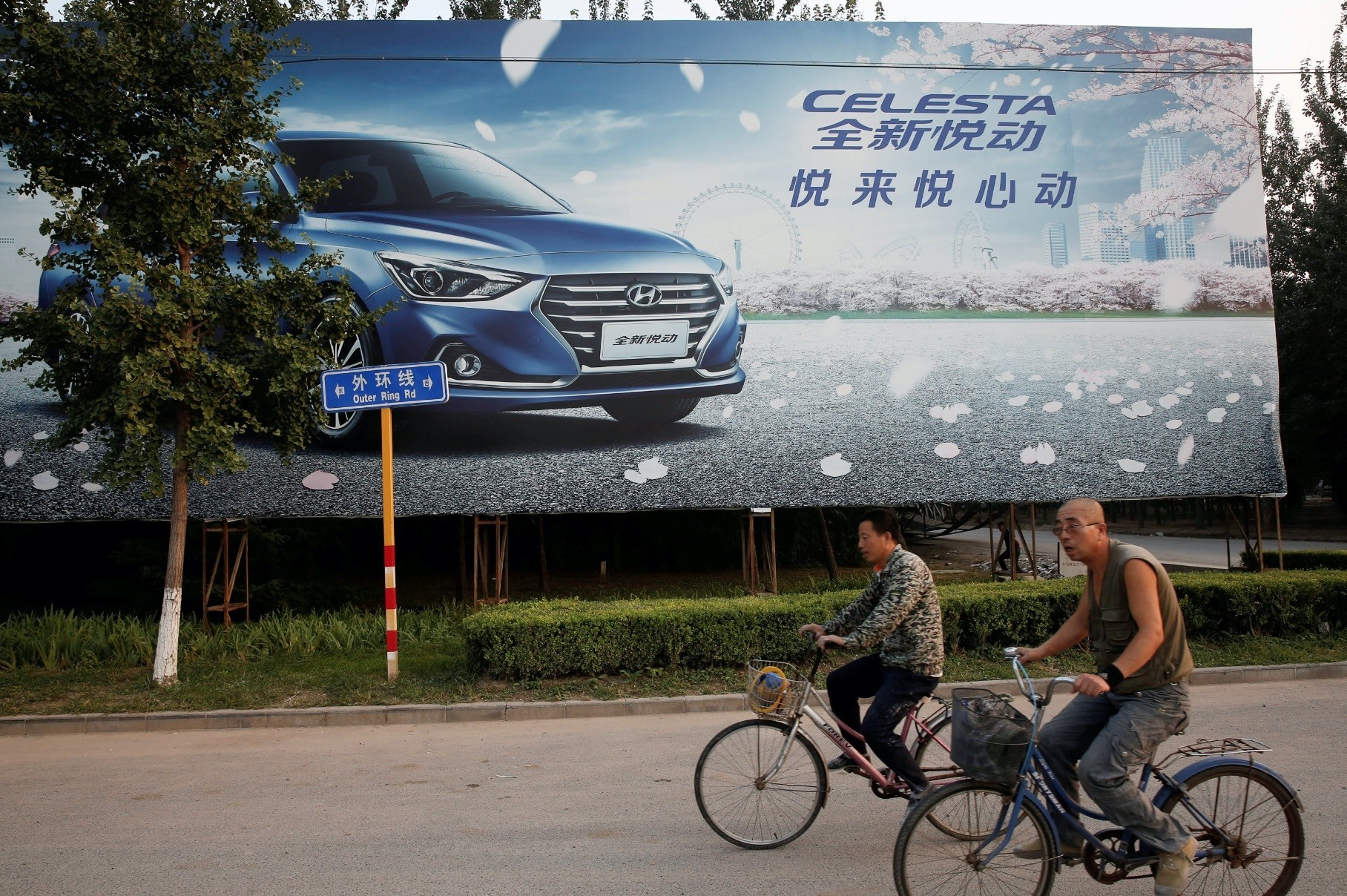 Men cylce past an advertising billboard for Hyundai cars opposite the plant of Hyundai Motor Co in Beijing.
by Sep 06, 2017 12:00 am

As the South Korean auto giant clashes with its Chinese partner to cut supplier costs, it has been caught up in a political row over a missile defense system deployed in South Korea, but opposed by China

Hyundai, along with affiliate Kia Motors, has been caught up in a political row over a missile defence system deployed in South Korea, but opposed by China. The South Korean giant is also at loggerheads with its Chinese partner over efforts to cut supplier costs, as they grapple with cut-throat competition, four people familiar with the dispute said. That has come against the backdrop of ever tougher competition from local Chinese automakers. Until last year, Hyundai and Kia ranked third in China by sales. But Hyundai's sales alone have slumped 41 percent from January to July, fraying relations with local partner BAIC Motor Corp Ltd and making this the biggest crisis since Hyundai entered the Chinese market in 2002.

Last month, Hyundai suspended production at its four China plants for a week after a French supplier refused to provide fuel tanks when its bills went unpaid. Yersterday, Hyundai suspended production at one of its plants in China after a German firm went unpaid. Hyundai and BAIC - whose Beijing Hyundai joint venture is a 50:50 partnership - are divided over how to solve the issue of suppliers and tougher competition. Hyundai wants to protect its South Korean supply chain, while BAIC favours shifting to cheaper Chinese suppliers to cut costs, the people said.

"BAIC wants to solve this aggressively and is ... asking Hyundai to change its sourcing strategy significantly and immediately," said the head of a Hyundai supplier based in Seoul, adding the idea was to source more locally from cheaper suppliers in China. Hyundai wants to solve this more gradually "over perhaps 5-10 years and do so in phases," the person said. A Hyundai Motor spokesperson told Reuters: "Hyundai Motor and Kia Motors have been continuously trying to source competitive parts in China."

The stand-off underscores the depth of a crisis facing Hyundai and its suppliers in China, heavily reliant on sales to Hyundai Motor and Kia Motors.

"China has started to become a grave for South Korean automakers and suppliers," said Lee Hang-koo, a senior research fellow at Korea Institute for Industrial Economics & Trade, adding suppliers were being hit the hardest. South Korean firms are squeezed between cheaper Chinese suppliers and European rivals which are technologically more advanced, making it challenging for them to diversify their customers beyond Hyundai Motor, he said. Parts from South Korean suppliers are around 30-40 percent more expensive than those from Chinese suppliers, industry sources say.

Hyundai has sought to turn its fortunes around, and last week replaced the head of its China operations. It also has plans for a local "brand" store, wants to assemble its premium Genesis cars locally and accelerate the launch of a sport-utility vehicle (SUV) for China. But sales have kept falling, aggravating an underlying rift at Beijing Hyundai over supplier costs, as Chinese carmakers such as Geely Automobile gain strength, and local suppliers improve their quality. Hyundai cars in China rely heavily on South Korea suppliers that have set up shop there, in large part to serve the group, despite higher costs. Some 145 members of South Korea's parts supplier association had 289 plants in China at the end of 2016.

"We can't beat (local suppliers) in terms of price," a senior executive at a South Korean supplier to Hyundai told Reuters, adding BAIC was putting pressure on Hyundai to switch to Chinese parts. A second supplier said some suppliers had not been paid since May, with BAIC pressing to cut prices by a fifth before payment. That could push some to a loss, the executive said. Pressure from BAIC to cut supplier costs has grown after a parts procurement study two years ago looked at its supplier costs versus Chinese rivals such as Changan Automobile Co Ltd and Great Wall Motor Co Ltd.