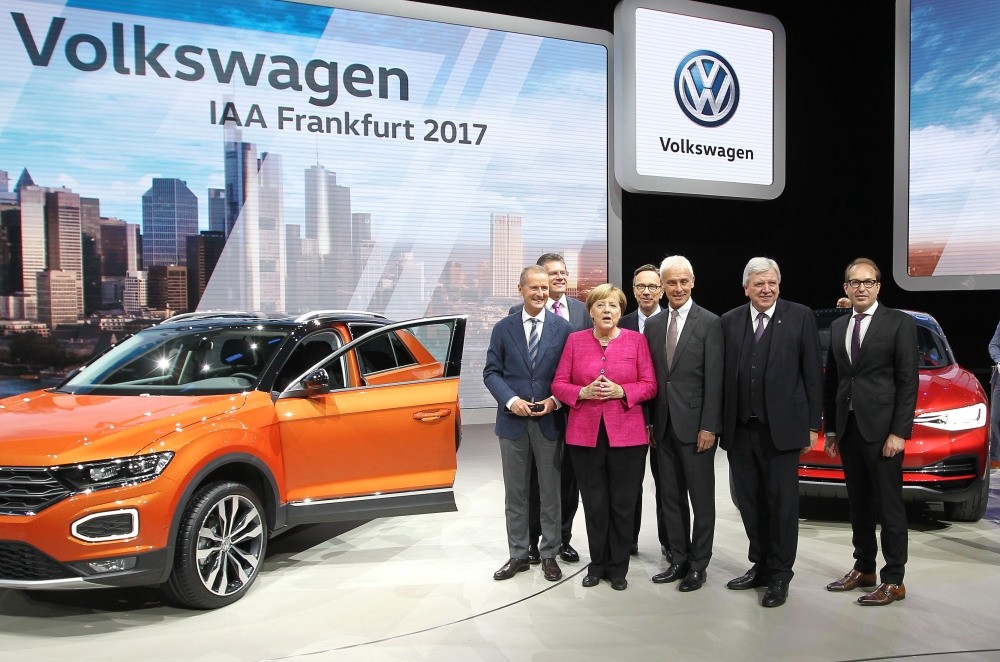 Angela Merkel and Volkswagen CEO Matthias Mueller (3rdR), and the other officials stand next to a VW T-Roc car as they visit the booth of Volkswagen during her inauguration tour of Internationale Automobil auto show, yesterday in Frankfurt am Main.
by Compiled from Wire Services Sep 15, 2017 12:00 am

The announcement came just 10 days after VW and its local partners agreed to recall 1.82 million vehicles owing to a faulty fuel pump. In March Volkswagen recalled nearly 680,000 premium Audi cars in China over defects in coolant pumps that could lead to engine fires, and another 572,000 due to potential problems arising from leaks in the panoramic sunroof.

The latest recall involves vehicles made between 2005 and 2017, according to the General Administration of Quality Supervision, Inspection and Quarantine. Of the vehicles being recalled, more than 4.7 million units were made in Chinese factories and 103,573 are imports.

Takata has recalled some 100 million airbags produced for some of the largest automakers, including about 70 million in the US, due to the risk that they could improperly inflate and rupture, potentially firing deadly shrapnel at the occupants. The defect has been linked to 16 deaths and scores of injuries worldwide. China is a crucial market for VW, which sold nearly four million vehicles in the world's biggest auto market last years. VW is still trying to recover from the controversy after it admitted in 2015 to equipping its diesel cars with defeat devices to evade emissions tests. The company pleaded guilty in March to charges stemming from "dieselgate" and agreed to pay $4.3 billion in penalties -- on top of $17.5 billion in civil settlements. Volkswagen still faces legal challenges in Germany and worldwide, and has so far set aside more than 22 billion euros ($24.4 billion) to cover costs. Experts estimate the final bill from the scandal could be even higher.

Meanwhile, Volkswagen is aiming to sell 1.5 million electric cars in China by 2025, its boss was quoted as saying yesterday, seeking to capitalize as Beijing mulls a clampdown on polluting vehicles. Speaking on the sidelines of the International Motor Show in Frankfurt, CEO Matthias Mueller said the firm was well-placed to take advantage of shifts in Chinese environmental policy.

"If the decision is made, we will be very well prepared in 2018," Japanese business daily Nikkei cited Mueller as saying. He pointed to a joint venture with Chinese auto maker JAC and stressed: "We will have products which will fulfill the political requirements." China, the world's biggest auto market, is mulling a ban on fossil fuel cars as it seeks to reduce choking pollution in its megacities.

German Chancellor Angela Merkel Merkel opened the Frankfurt auto show yesterday, telling car manufacturers that theirs was a key industry of "huge importance" for Germany's economy. To succeed, she says, automakers must "regain their credibility and trust as quickly as possible."