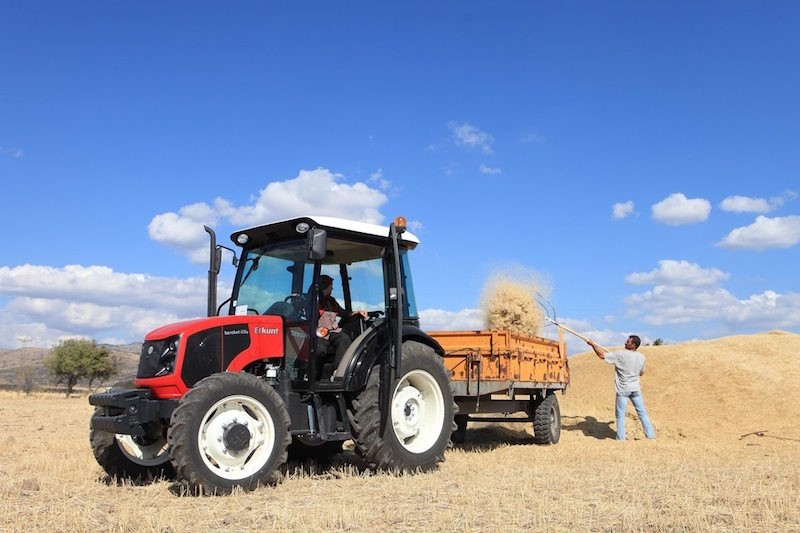 One of the world's largest tractor manufacturers Indian-based Mahindra & Mahindra (M&M) has made the second largest purchase in the Turkish market following the purchase of Hisarlar at the beginning of the year. Mahindra & Mahindra purchased 100 percent of Erkunt Trakör, one of leading firms of the Turkish tractor manufacturing sector. According to an announcement released by the company to the Indian stock exchange, M&M paid $76 million for a 100 percent stake in Erkunt Tractor and the transactions related to the sales will be completed by Nov. 30.

Erkunt Tractor Chairman Zeynep Erkunt Armağan stressed that the company has pioneered many firsts so far, noting that they have also endeavored to be the biggest supporter of Turkey's agricultural sector. Armağan recalled that the company has traveled millions of kilometers to listen to the requests of local farmers and produce innovative solutions since the first day of establishment.

"Believing that Turkey is a self-sufficient country, we aim to avoid the foreign trade deficit created by imports of agricultural production. At every opportunity we have highlighted that domestic production of agricultural machinery is an important part of this process," Armağan said. "As an extension of this understanding, we know that we have to integrate with the global economy, and we achieved a major success by attracting a strong and global investor [M&M] to Turkey."

"We are making a strong entry with M&M for our 15th anniversary that we will celebrate in 2018," Armağan noted, adding that they will work to bring more to the country and its farmers by making their brand an important part of M&M's global production and sales network.

Rajesh Jejurikar, chief executive of the M&M Farm Equipment Division, said Turkey is a very valuable and strategic market both in terms of production and marketing in its location, advanced technology infrastructure and agricultural capacity.

Pointing out that the Turkish tractor market, which grew by more than 35 percent in the last three years, is a showcase that stands out with its regional possibilities as well as increasing domestic demand while adding that Turkey is the biggest player in its geographical region, Jejurikar said Erkunt Tractor, which has continuously expanded its product range by meeting various regional requirements of Turkish farmers in the last decade, is one of the strongest brands in its market.

"With its extensive dealer-service network and local supply chain, we believe that Erkunt will take more important steps with Mahindra from now on in this fast-growing market. Mahindra will mobilize its power and resources in the world to develop the mechanization industry in Turkey," Jejurikar went on to say, adding, "I believe that this strong merge will provide significant contributions to Turkey and the entire region, and I hope that it will be productive and profitable for both countries and brands."

Turkey ranks first in Europe and fourth in the world in terms of the tractor market.

According to figures released by the Turkish Statistical Institute (TurkStat), in 2016 the domestic tractor market grew by 5 percent compared to the previous year and rose to 70,205 units, breaking a new record.

M&M, operating under Mahindra Group which is worth $17.8 billion, achieved a turnover of $13 billion last year. The Indian company is already active in Turkey with its own brand and is a strong player, as well.