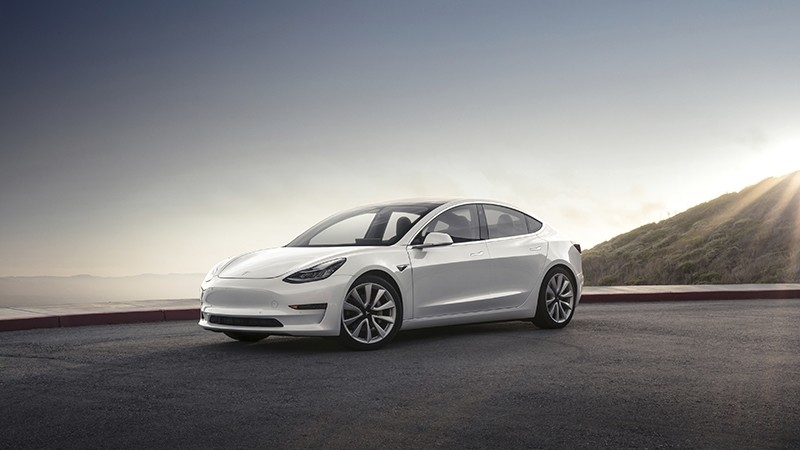 This photo provided by Tesla shows the 2017 Tesla Model 3, a compact electric sedan that offers two levels of range. It's the newest model from Tesla and slots below the Model S sedan in the company's lineup. (Courtesy of Tesla Inc. via AP)
by Oct 03, 2017 12:00 am

Tesla has missed its production target for the Model 3 sedan, the first mid-priced electric vehicle for the mass market in its lineup, the car maker announced Monday.

Only 260 of the sedans were produced in the third quarter due to "production bottlenecks," the company said, failing to meet founder and CEO Elon Musk's expectations of 1,500 Model 3's delivered by September.

The electric car maker started taking reservations for its mass-market sedan in March 2016, which is priced at $35,000 (29,824 Euros) to start and is key to the company's plans to expand market share.

The company said it has received some 450,000 pre-orders for the Model 3. Production has been hobbled by a bottleneck in a handful of "manufacturing subsystems," according to a company statement.

"There are no fundamental issues with the Model 3 production or supply chain. We understand what needs to be fixed and we are confident of addressing the manufacturing bottleneck issues in the near-term."

Musk has previously predicted much higher deliveries for the Model 3 sedan by the end of the year.

"Looks like we can reach 20,000 Model 3 cars per month by Dec," Musk said on Twitter in July, when announcing deliveries of the first 30 of the highly-anticipated cars.

Not long after Tesla was founded in 2003, Musk said the plan was to use money from high-end electric vehicles to create more affordable offerings to make the technology the new automotive norm.

The company also announced Monday that it increased production of Model S and Model X vehicles to an all-time best quarter of 26,150 vehicles, and anticipated it would deliver 100,000 of the luxury models in 2017 - a third more than in 2016.