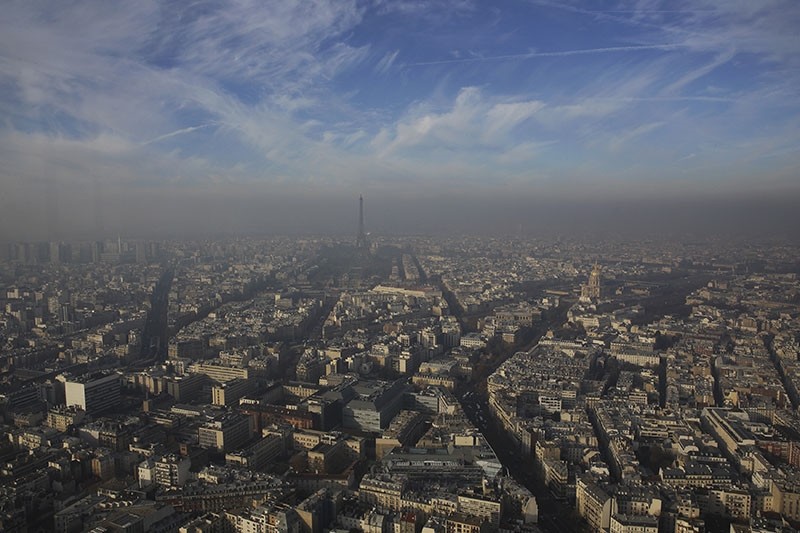 The Eiffel Tower is seen through a small-particle haze resulting in a high level air pollution index according to Airparif, the air quality monitoring agency, in Paris, Dec. 12, 2013. (Reuters Photo)
by Daily Sabah Oct 12, 2017 12:00 am

Paris authorities plan to banish all petrol and diesel fueled cars from the world's most visited city by 2030, Paris City Hall said on Thursday.

The move marks an acceleration in plans to wean the country off gas-guzzlers and switch to electric vehicles in a city often obliged to impose temporary bans due to surges in particle pollution in the air.

Paris City Hall said in a statement France had already set a target date of 2040 for an end to cars dependent on fossil fuels and that this required speedier phase-outs in large cities.

"This is about planning for the long term with a strategy that will reduce greenhouse gases," said Christophe Najdovski, an official responsible for transport policy at the office of Mayor Anne Hidalgo.

"Transport is one of the main greenhouse gas producers...so we are planning an exit from combustion engine vehicles, or fossil-energy vehicles, by 2030," he told France Info radio.

The French capital, which will host the Olympic Games in the summer of 2024 and was host city for the latest worldwide pact on policies to tame global warming, had already been eyeing an end to diesel cars in the city by the time of the Olympics.

Paris City Hall, already under attack over the establishment of no-car zones, car-free days and fines for drivers who enter the city in cars that are more than 20 years old, said it was not using the word "ban" but rather introducing a feasible deadline by which combustion-engine cars would be phased out.

There are about 32 million household cars in France, where the population is about 66 million, according to 2016 data from the Argus, an automobile industry publication.

The ban on petrol-fueled, or gasoline-engine vehicles as they are known in the United States, marks a radical escalation of anti-pollution policy.

Many other cities in the world are considering similar moves and China, the world's biggest polluter after the United States, recently announced that it would soon be seeking to get rid of combustion-engine cars too.