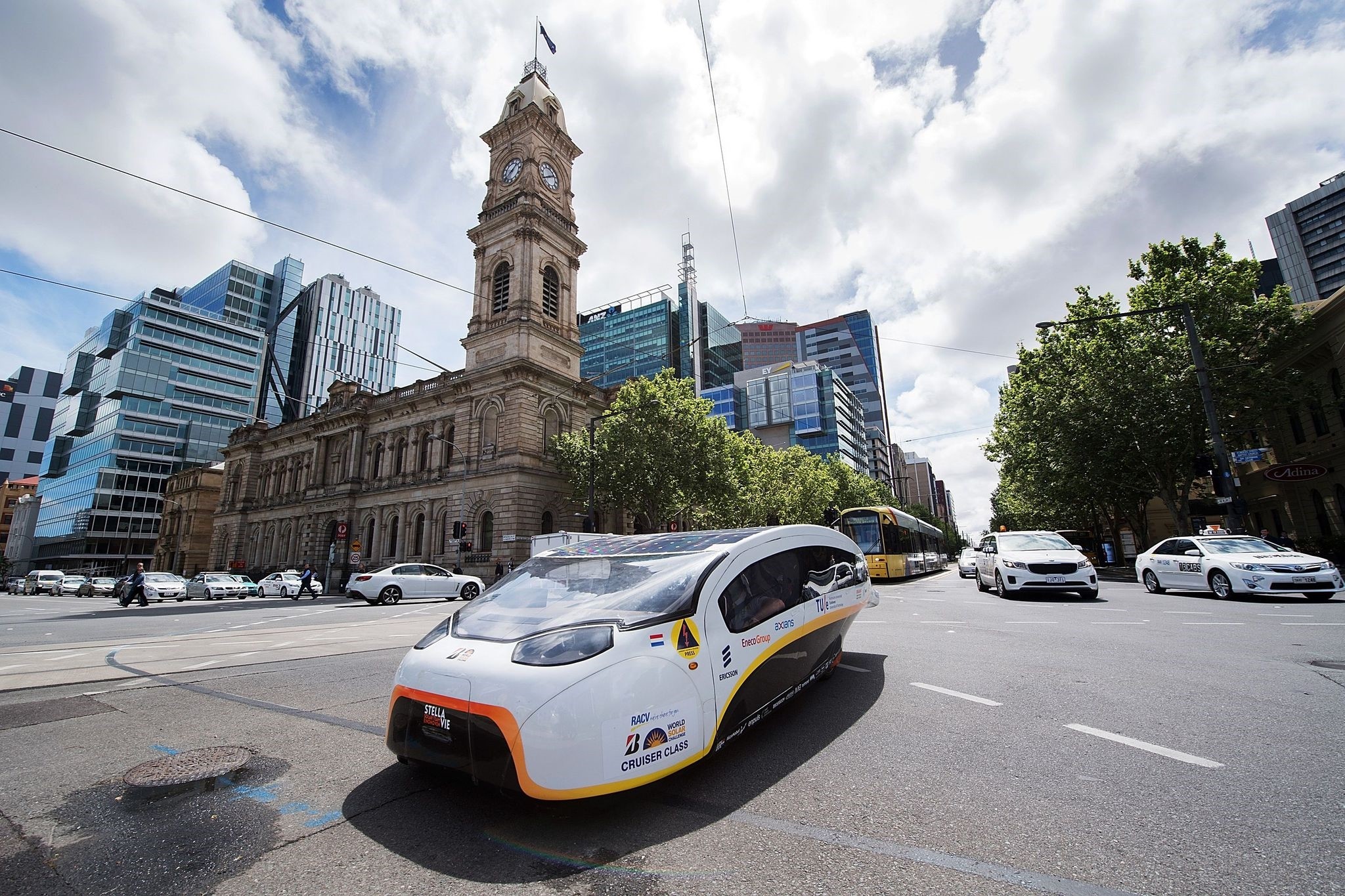 Solar Team Eindhoven vehicle u2018Stella Vieu2019 from the Netherlands passes the Adelaide Town Hall to the finish line in Adelaide.
by Oct 16, 2017 12:00 am

A futuristic Dutch family car that not only uses the sun as power but supplies energy back to the grid was hailed as "the future" Sunday as the World Solar Challenge wrapped up.

The innovative biannual contest, first run in 1987, began in Darwin a week ago with 41 vehicles setting off on a 3,000-kilometer (1,860-mile) trip through the heart of Australia to Adelaide. Dutch car "Nuna 9" won the race for the third-straight time, crossing the finish line on Thursday after traveling at an average speed of 81.2 kilometers per hour (55.5 mph). It was competing in the Challenger class, which featured slick, single seat aerodynamic vehicles built for sustained endurance and total energy efficiency. But there was also a Cruiser class, introduced to bridge the gap between high-end technology and everyday driving practicality.

German team HS Bochum was the first to arrive Friday with its stylish four-seater classic coupe, featuring sustainable materials such as vegan pineapple leather seats. But another Dutch team, Eindhoven, was set to be crowned overall champion based on a system taking into account design, practicality, energy efficiency, and innovation, organizers said. Their family car, "Stella Vie," carried five people at an average speed of 69 kilometers per hour, with event director Chris Selwood saying it was a practical demonstration of what the future might look like. "These incredible solar cars have been designed with the commercial market in mind and have all the features you'd expect in a family, luxury or sporting car," he said.

"Team Eindhoven are to be congratulated on their achievement to date - clearly the most energy efficient solar car in the field, capable of generating more power than they consume.

"This is the future of solar electric vehicles. When your car is parked at home it can be charging and supplying energy back to the grid."

Cars in the race were mostly developed by universities or corporations, with teams hailing from around the world. They were allowed to store a small amount of energy but the majority of their power had to come from the sun and the vehicle's kinetic forces. Team Eindhoven said its vision had been to build a family car with a balance between aerodynamic, aesthetic and practical design.

"We think we succeeded very well with a car that is more efficient than its predecessors and includes some state-of-the-art technologies to not only generate energy but also supply it back to the grid," they said.

"Through a smart charging and discharging system she charges the battery when the demand of energy from the grid is high and vice versa. Any surplus energy generated can easily be supplied back to the grid." Of the 12 Cruiser class cars that started, six finished. As well as the German and Dutch entrants, vehicles from Australia, Hong Kong, Taiwan and the United States also crossed the finish line.