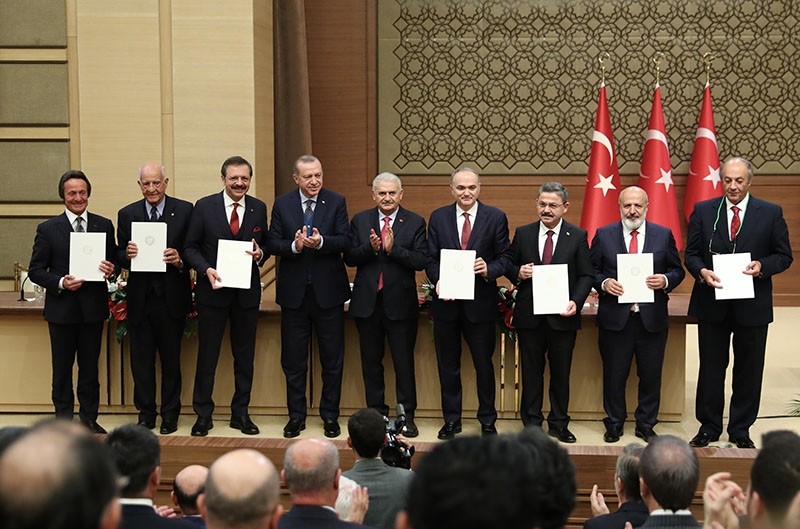 In the speech given during the meeting, Erdoğan said officials expect the prototype of the car to be ready in 2019, adding that they expect sales to begin in 2021.

Expressing his gratitude to the participating firms, Erdoğan pledged his full support for the venture, adding that he will closely follow relevant developments.

"I declare right now that I want to own the first car, provided I pay the price of the first car you will launch on the market," he said.

"No one should hesitate. We will produce Turkey's [first] car using the best design and technology, both for our country and the world."

The president said that it is a shame for Turkey to have fallen behind in manufacturing a domestically produced car, noting that over 750,000 automobiles were sold in the country last year.

"Today, we are taking a historic step to get rid of this shame," he said.

"We expect the joint venture group to finish the preparation process quickly, to complete the prototype of the car in 2019 and for sales to begin in 2021. We do not want the slightest delay in this project, which I believe has a special place among Turkey's 2023 visionary goals," Erdoğan said.

The Turkish president, who said that he will stand beside the signatories, indicated that he will appoint a special team for the Presidency if necessary, which would monitor the project's progress and take steps for the elimination of problems that arise.

"On the condition that I pay for it, I would like to say that I will buy the first car launched on the market," Erdoğan said.

Following the entrance into the market of hybrid electric cars and driverless vehicles in recent years, Erdoğan said that the automobile sector has entered a new era.

"We do not doubt that the car to be produced will be suitable not just to meet modern-day needs, but also in meeting the needs of the future generations, as well. The pioneering abilities and carrier power of this car will surely be a joint venture group." Erdoğan said.

The Turkish president also said the car will be unveiled with the accumulations, contributions and support of all of Turkey.

When a proper product is put forth, Erdoğan said the nation will go for it wholeheartedly, adding that he believes people will prefer the domestically produced car.

Erdoğan also said that they will give every kind of support for marketing it worldwide, saying that they know very well that all the big automobile makers in the world have received state support during their emergence.

He added that only through such initiatives and breakthroughs can Turkey become one of the world's top-10 economies.

He also said that they could also lean toward producing hybrid and electric cars, indicating that regardless of the decision, they will provide all kinds of support so long as the Turkish nation is adequately equipped to realize its dream.

Yıldırım said the project "will add a new success to Turkey's list of ongoing achievements."

"According to export figures released in October, exports were highest in the automotive sector, at over $2.6 billion," he said.

"It is out of the question for Turkey to not produce domestic cars, as it has become so competent in the automotive sector."

According to the Automotive Distributors Association, 423,198 cars were sold in the first eight months of this year, with 294,037 imported and 129,161 produced domestically.

Meanwhile, the total number of imported automobiles in the same period shrunk 25 percent and local manufacturing went up 20 percent, compared with the first eight months of last year.

President Erdoğan had previously called for "braves" among Turkey's industrialists should undertake the task of producing a domestically-built car.

TOBB President Hisarcıklıoğlu said the five companies in the consortium have 110,000 employees and that their production for last year was close to TL 65 billion ($17.1 billion).

"We will work very hard for three-to-four months. We will analyze alternative technologies and funding opportunities. We will design our state support for this project together with our relevant Ministry, in accordance with instructions from the president, and we will build our company in the first months of 2018," he said.

Anadolu Group Chairman Özilhan said the group is built on the concept of returning what it has gained back to Anatolia, adding that the group is pleased to be a member of the joint venture group. Özilhan said that the Anadolu Group will transfer its 67 years of experience in the sector to Turkey's automotive project. "Turkey needs to participate in the rapid transformation process in the global automotive sector by using today's technologies. I make much of the support of the state in such an important project," he added.

Anadolu Group produces light trucks, vans, buses and pick-ups in partnership with Japan's Isuzu Motors Ltd. and Itochu (Anadolu Isuzu), and engines with its own brand ANTOR. The group is also the distributor of South Korean manufacturer Kia in Turkey and owns a corporate car rental company. Founded in 1950, the group employs more than 50,000 people in ventures in nine different sectors, including partnerships with AB InBev in Turkey's best selling beer brand Efes, Coca-Cola and McDonalds, in addition to retailer Migros.

BMC Chairman Sancak said that as a company with 53 years of experience in the automotive sector, they have continuously developed a commercial vehicle family. Sancak explained that they have exported vehicles produced for the defense industry to 75 countries. "Our company was ready to undertake the task in this national project with its commercial- and military-grade engines, wheeled and tracked armored vehicles produced up to know, ongoing tank and rail systems and 1,800 employees, including 500 engineers," he said.

Founded in 1964 as the Turkey plant of now defunct British Motor Corporation (BMC) in partnership with local partners, BMC outlived its parent company to become one of Turkey's biggest commercial vehicle manufacturers and defense contractors.

Kıraça Holding Chairman Kıraç said that the existence and purpose of the joint venture group is of great importance, adding that Turkey has to keep up with the changing world. Referring to the obligation to come to the fore in education and technology, Kıraç suggested that Turkey is now able to create its own make with its own possibilities without needing a foreign partner. "I hope the projects carried out by the joint venture group will reap benefits," he added.

Kıraça Group's Karsan is among the major bus and minibus manufacturers in Turkey, and the company also produces Hyundai light commercial vehicles. İnan Kıraç is among the first names that comes into mind when Turkey's automotive sector is concerned, just like his partner Claude Nahum. As a young engineer and the son-in-law of Vehbi Koç, the founder of Turkey's largest conglomerate Koç Holding, Kıraç started his automotive career in as the general manager of Otoyol, the manufacturer of Fiat commercial vehicles. He then appointed as the general manager of TOFAŞ, a joint automobile factory between Koç and Fiat. Following his retirement as the automotive group president from Koç Holding, which also has a joint venture with Ford, he founded Kıraça with Claude Nahum, the former foreign trade head of Koç Holding and the son of Vehbi Koç's close friend and business associate Bernard Nahum. His brother Jan Nahum, who is also a Kıraça board member, also served for more than 35 years in Koç Group's automotive companies and as TOFAŞ general manager in a tumultuous period between 2002 and 2004.

Zorlu Holding Chairman Zorlu said the Zorlu Group has always capitalized on the power of the domestic industry as well as value-added production, adding that exports make significant contributions to the country's economy as well as decreasing the trade deficit. Zorlu also said that with its experience in high technology, the group will assume an important role in the production of Turkey's car. "We are proud to partake in this project as Zorlu Group," he said, expressing his belief that by ensuring the state's support and leadership, the initiative will succeed in its goal to create a powerful automotive brand that addresses global markets.

Founded in 1953, Zorlu Group now employs more than 26,000 people in its ventures in textile, energy and electronics sectors, with electronics and home appliances manufacturer Vestel being the group most famous brand.

Turkcell Chairman Akça also said that the company is laboriously working on the 5G project, which will be offered in the next couple of years. According to Akça the company also continues its preparatory work on preliminary technologies for the smart transportation system, which will support Turkey's domestic car. "We believe that Turkcell will contribute significantly to domestic car production," Akça said. Turkcell is Turkey's biggest mobile phone operator in terms of subscribers.

Devrim (Revolution), the first car developed and produced in Turkey, was a glimmer of hope during the early 1960s and was the symbol of the dream to produce a fully domestic automobile.

On June 16, 1961, then-President Cemal Gürsel unveiled his mission to develop an automobile that would meet the needs of the Turkish military for street cars. The mission was addressed to the National Railways of the Republic of Turkey (TCDD). A team was commissioned and the car was designed and manufactured in a short time, with some difficulties encountered during the design of the engine and the gearbox.

Despite these technical difficulties and political problems, Devrim was showcased on Oct. 29, 1961, on the 38th anniversary of the foundation of the Republic, and then drove off to take Gürsel to Mustafa Kemal Atatürk's mausoleum Anıtkabir.

Again in early 1960s, Koç Holding proposed to the Turkish government that a Turkish car brand should be established, up to that point only kit assembly operations existed in the country. The government accepted the project and the automobile was named "Anadol" after the Anatolia region of Turkey, and the name was chosen by members of the public in a national competition.

The Anadol body shells were made in the U.K. and shipped to Turkey for assembly, where they were basically mounted on to the running gear and a 1.2-litre engine of the contemporary Ford Cortina. Initially a two-door, a four-door model was later added, as well as bigger engines, and the basic design survived until 1984. Along the way, there was also a neat coupe called the STC-16, which resembled a 1970s Datsun 240Z, and a utilitarian chassis-cab pick-up version. The Anadol was a success; more than 100,000 were built in its 18-year run. Yet, it was not an indigenous production except for its name.