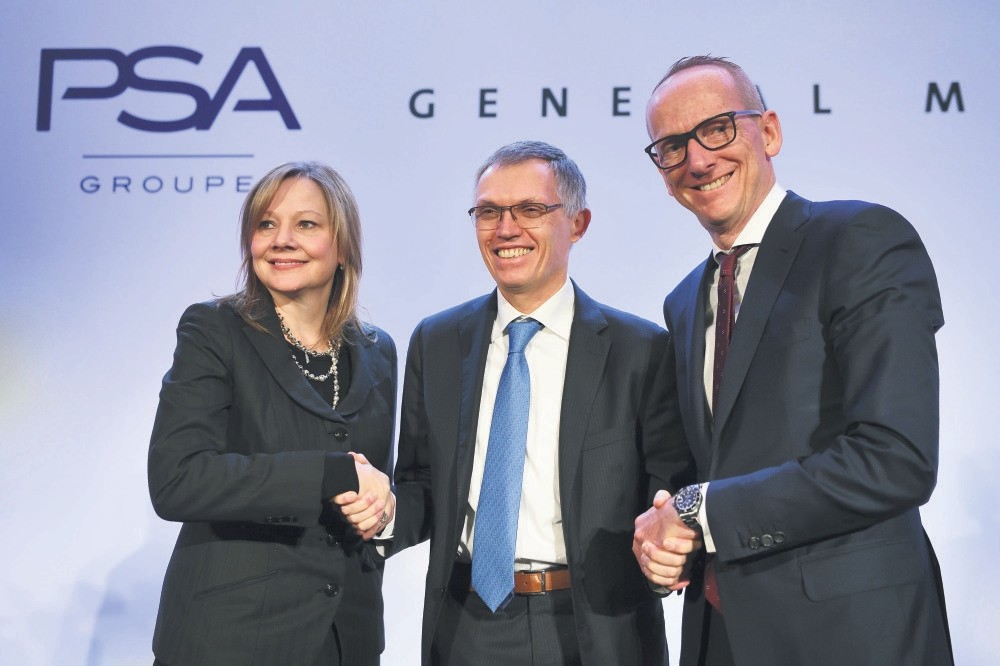 GM CEO Mary T. Barra, chairperson of the managing board of PSA Tavares and Opel CEO Neumann shake hands during a press conference about the acquisition by PSA of GMu2019s European subsidiary, which includes Opel and Vauxhall in Paris on March 6, 2017.
by Dec 07, 2017 12:00 am

Peugeot maker PSA Group, which paid General Motors 1.3 billion euros for Opel, now wants about half of the money back after discovering the full extent of its CO2 emissions challenges and exposure to European fines, sources told Reuters. PSA, which completed the acquisition in late July, said earlier this month it will need to move Opel models onto its own more fuel-efficient technology faster than planned, in order to cut carbon dioxide emissions before new EU limits are phased in from 2020-21, backed by hefty penalties.

The French carmaker has told GM it believes it is owed more than half a billion euros and intends to pursue a legal claim on the grounds that it was misled about Opel's emissions strategy, two people familiar with the matter said. PSA is seeking 600-800 million euros, according to one.

The companies have discussed the grievances raised by PSA, which has yet to initiate a formal claim, sources close to both manufacturers said.

"We are not aware of any claim submitted by PSA regarding future CO2 targets and we cannot speculate on issues that have not been raised with us," GM spokesman David Caldwell said. Carmakers are scrambling to reduce carbon emissions by the 2021 deadline, when their individual EU-imposed limits will fall to an average 95 grams per kilometre from 130 grams today. A decline in diesel sales is complicating their task, as consumers switch to less fuel-efficient gasoline cars.

The challenge is sparking big investments in smaller engines and new powertrain technologies, from battery-powered cars to rechargeable hybrids. For those who miss their targets, fines of 95 euros per vehicle, per excess gramme of CO2, could add up to hundreds of millions of euros annually. PSA believes GM misrepresented Opel's CO2 challenges and emissions trajectory during negotiations and due diligence prior to the March acquisition deal and its formal closing on July 31. Chief Executive Carlos Tavares has publicly hinted as much.

"We became aware a few weeks after we finalised the closing that the company was going to the wall on CO2 emissions," the PSA boss told reporters on Nov. 9, after presenting a heavily revised turnaround plan at Opel headquarters near Frankfurt. PSA shares have since fallen 14 percent, underperforming peers.