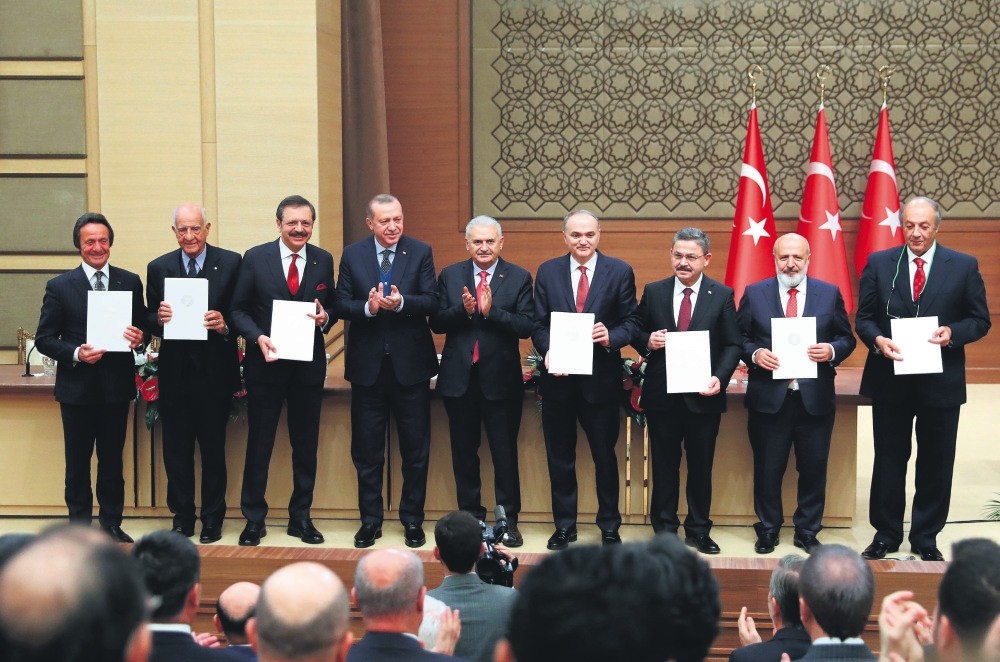 After President Erdoğan announced a joint consortium that will manufacture Turkey's first domestic automobile in early November, the government now aims global success with the project, as it wants for the vehicle to hit the roads not only in Turkey, but across the world

Science, Industry and Technology Minister Faruk Özlü said that the government's goal for the country's first domestically produced automobile is for it to hit the road around the world.

Speaking on Friday at a meeting in Istanbul, Özlü said they are aiming for worldwide success with the project and there is no obstacle for Turkey not to realize its half-century-old dream.

are carrying out serious work and we hope we will complete Turkey's automobile at the previously set time. Our goal for the automobile is for it to make an appearance not only in Turkey, but on global roads as well. We aim a global success with this project. We are thinking of manufacturing a car not only for Turkey, but for the whole world," he said.

"The era of the internal combustion engine is about to end. Henceforth, electric cars are the future. On this path we are taking, we aim to catch the future. Our car will run on electricity. I believe we have chosen the right time for the electric car. Our president's instruction in terms of timing was a very good decision. Ours is to put it into practice. The intellectual property rights of the prototype for Turkey's automobile will belong to our country. These vehicles will be a kind of walking software," he said.

"Our 2023 goal is not the ultimate goal for us, but an intermediate goal we have set in order to reach our main goal. ... A Turkey that has realized its 2023 targets will go toward its 2071 targets with much more confident steps. We have pursued our work with this consciousness, and we will continue to do the same."

Meanwhile, a report in the Sabah daily said the joint consortium group received invitations from 10 provinces that have entered the race to produce the domestic automobile. Bursa, Sakarya, Kayseri, Konya, İzmir, Kocaeli, Eskişehir, Ankara, Manisa and Kütahya have reportedly issued invitations to the consortium for the domestic automobile's production.

The provinces initiated a process in order to get ahead in the race to attract the investment. Some of them reportedly promised free land while others said they have developed cooperation with universities to train qualified personnel.

Also, some of the provinces are said to have had international companies prepare feasibility reports.

Even though it is not yet certain where the production of the first domestic automobile will take place, the race seems to be mostly between provinces in Anatolia and those in the Marmara region.

Early November saw the launch of a groundbreaking initiative that aims to manufacture the country's first domestic automobile. The goal has brought together the country's largest manufacturers and companies around a consortium, including Karsan Otomotiv, Anadolu Group, Turkcell, Vestel and BMC.

The names were announced by President Recep Tayyip Erdoğan at the Presidential Palace complex in Ankara.

During his speech at the launch of the Automobile Industry Domestic joint venture group, Erdoğan said officials expect the prototype of the car to be ready in 2019, adding that they expect sales to begin in 2021.

The initiative came after repeated calls from Erdoğan for a joint venture car project by Union of Chambers and Commodity Exchanges (TOBB) and the Science, Industry and Technology Ministry.

Erdoğan also said that the initiative group of Turkey's automobile will decide on the class, design, engine technology, model, production method and market targets for the car. He said that they could also lean toward producing hybrid and electric cars, indicating that regardless of the decision, they will provide all kinds of support as long as the Turkish nation is adequately equipped to realize its dream.