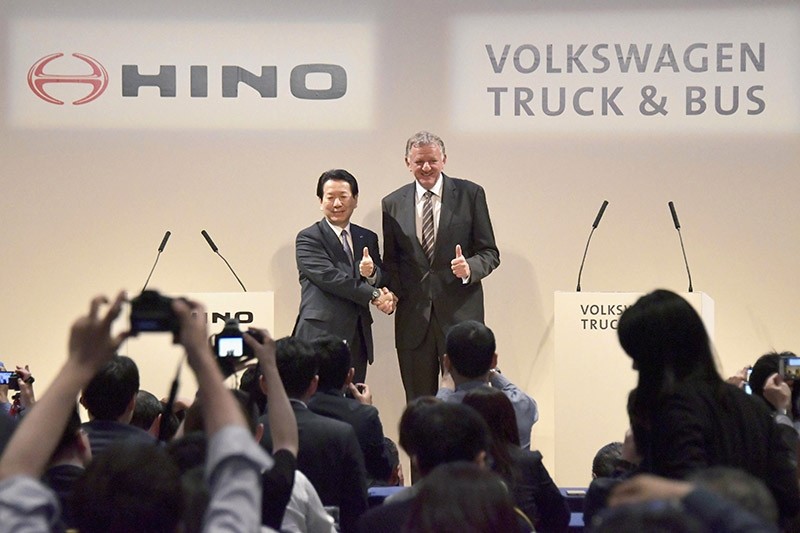 Andreas Renschler, right, a board member at Volkswagen AG and CEO of Volkswagen Truck & Bus, and Hino Motors President and Chief Executive Yoshio Shimo, left, pose for the media during a press conference in Tokyo, Thursday, April 12, 2018. (AP Photo)
by Compiled from Wire Services Apr 12, 2018 12:00 am

Each company will remain independent, the two companies said in a statement. But they will jointly develop innovative technologies, according to the agreement.

Executives and management representatives from the two companies have formed an alliance board to discuss their long-term goals and explore and evaluate cooperation in existing technologies. They will also assess initiatives for future transportation technologies.

By joining forces in a strategic partnership, the two companies "will be able to expand their respective global footprints and get into a superior position to tackle the challenges of the industry," they said in a statement.

The arrival of the digital age and robotics in the auto industry is pressuring automakers around the world to deliver to customers vehicles that connect to the net or avoid crashes automatically.

Partnerships can save costs and boost competitiveness. Automakers are also trying to respond to a global push to reduce global warming and pollution by developing cleaner powertrains.

The deal brings together two major players in trucks and buses, a sector that some analysts say can benefit the most from such new technology.

Hino Motors President and Chief Executive Yoshio Shimo said the deal came together because the companies respected each other and shared goals.

"It will also be a strong tie-up at times of new challenges in the field of transportation due to the rapid growth of e-commerce," he said.

Consumers in Japan and other rapidly aging countries are looking for new transportation options, he said.