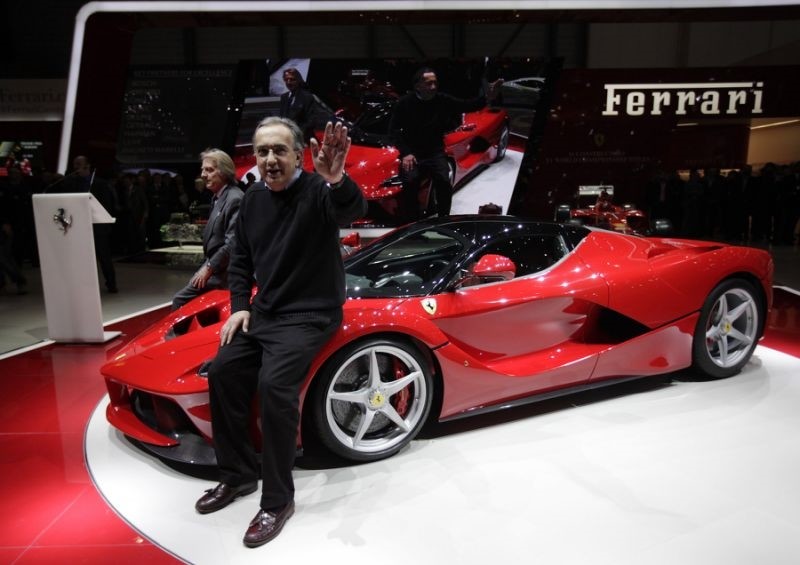 Shares in the iconic Italian company, which Marchionne spun off from Fiat Chrysler, fell in both Milan and New York on Monday as markets took stock of Marchionne's unplanned departure due to serious health problems.

"Ferrari loses a winner," said a note from Credit Suisse that pointed out that the company's stock price had risen 155 percent since making its market debut in 2015.

Ferrari announced Saturday its board had learned with "great sadness" that Marchionne, 66, "will be unable to return to work" and would be replaced by Louis Camilleri, a former chief executive of Philip Morris.

The company also announced that John Elkann, the grandson of legendary Fiat founder Gianni Agnelli, would take over as chairman.

The Agnelli family holds 23.5 percent of Ferrari through its holding company Exor and has an agreement with Piero Ferrari, the son of the company's founder, covering another 10 percent of the shares.

The announcement came in parallel to one from FCA, which had also been led by Marchionne.

At FCA, Marchionne will be succeeded by Mike Manley, accelerating a succession plan that had been expected to take place next year.

"Manley has a track record of success with the very profitable Jeep SUVs and Ram trucks, which should bode well," said Efraim Levy, an analyst at CFRA Research.

"Still, while the management shift was already planned for 2019 and considering our expectation of a relatively smooth transition, we often see increased corporate risk of underperformance following the exit of a dynamic, transformative and charismatic leader."

FCA's financial performance has benefitted from a slate of trucks and SUVs increasingly dominant in the US, even as it faces challenges with restoring its reputation with regulators after safety lapses and industry-wide headwinds over trade tariffs.

Adding to that is a growing labor-management fight in Kokomo, Indiana in the US Midwest where workers approved a strike over festering grievances, the United Auto Workers confirmed Monday. An FCA spokeswoman said the company had agreed to meet with workers.

"We are meeting to address their concerns," said FCA spokeswoman Jodi Tinson.

While Marchionne had been expected to retire from FCA in 2019, he had planned to stay at Ferrari through 2021 and had been planning to outline a five-year strategy around September.

The plan had been expected to spell out a blueprint to boost profitability, in part by launching new products, such as a sports utility vehicle.

Analysts differed as to whether Marchionne's departure would significantly dent those ambitions.

Despite the loss of Marchionne, "the path forward remains unchanged," said Credit Suisse.

Camilleri, who has been on the Ferrari board since 2015, has "deep ties" to the company and "intimate knowledge" of the five-year plan, Credit Suisse added.

"While we do not question Camilleri's management capabilities, we would have preferred to see management succession go to someone with more luxury goods and Formula I experience," Hilgert said in a note. "However, we realize that someone with that particular set of skills is likely hard to come by in this extreme situation."

By all accounts, the new chief executive will have a tough act to follow.

The success of Ferrari's stock has silenced naysayers who doubted Marchionne's plan to split the company off from FCA.

Ferrari was created in 1947 by Enzo Ferrari, a race car driver and entrepreneur whose creations coupled a 12-cylinder engine with a sleek body that has evolved over the years into one of the most luxurious vehicles.

Ferrari's market valuation has more than doubled since the company's initial public offering to more than $25 billion, even though it only produced 8,398 cars last year.