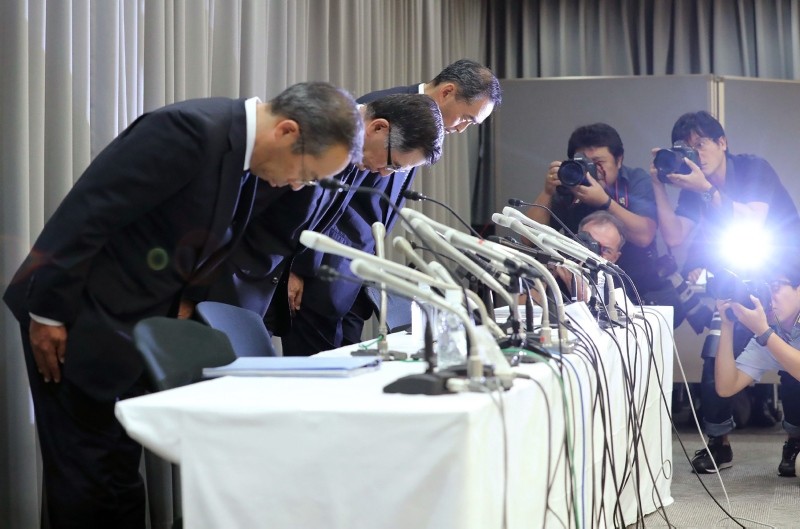 Suzuki Motor president Toshihiro Suzuki (C) bows with other executives during a press conference in Tokyo on August 9, 2018. (AFP Photo)
by Compiled from Wire Services Aug 09, 2018 12:00 am

The three automakers admitted conducting improper inspections after the ministry ordered 23 Japanese auto and motorbike manufacturers to examine their inspection procedures in July after similar falsifications were found at Nissan Motor Co. and Subaru Corp. in their fuel economy data at final product quality checks.

They said incomplete emissions tests were done on some of its vehicles, but its officials certified the results as though the tests had been administered properly.

Suzuki admitted improper inspections on 6,401 vehicles, or nearly half of those subject to sample checking, between 2012 and 2018.

Mazda said it 72 vehicles or 3.8 percent of those in its sample were affected, while Yamaha put the figure at 2.1 percent of its motorbike sample.

The transport ministry said it would "examine their reports and take strict measures if necessary". It said most of the 20 other companies asked to examine their data had reported no misconduct, while several others were still investigating.

The admissions are the latest in a string of scandals involving data falsification and testing standard breaches in Japan's key auto sector.

In July, Nissan admitted data on exhaust emissions and fuel economy had been "altered" for some of its vehicles, and last year the firm was forced to recall more than a million vehicles after admitting staff without proper authorization had carried out some inspections.