VW investors demand $11B in compensation for diesel scandal 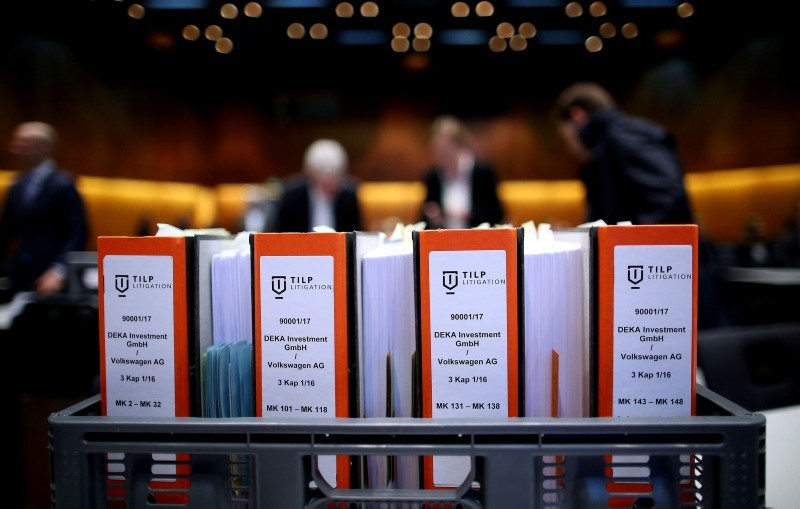 Folders containing documents in connection with the Volkswagen ,dieselgate, scandal are pictured on the first day of the model case proceedings in Germany against German car maker Volkswagen (VW) on September 10, 2018 in Braunschweig. (AFP Photo)
by Sep 10, 2018 12:00 am

Volkswagen went on trial on Monday to face investors seeking 9.2 billion euros ($10.6 billion) in compensation, arguing the carmaker should have informed shareholders earlier about its diesel pollution scandal.

Shareholders representing 1,670 claims are seeking compensation for a slide in Volkswagen's (VW) share price triggered by the scandal, which broke in September 2015 and has cost the firm 27.4 billion euros in penalties and fines so far.

Presiding Judge Christian Jaede at the Braunschweig higher regional court will make opening remarks at the trial on Monday setting out the agenda and case priorities for the trial, which will then determine which witnesses may be called.

Plaintiffs suing the carmaker said VW failed in its duty to inform shareholders about the financial impact of the scandal, which became public only after the U.S. Environmental Protection Agency (EPA) issued a "notice of violation" on Sept. 18, 2015.

Had institutional investors known about VW's criminal activities they may have sold shares earlier or not made purchases, thereby avoiding losses on their shareholdings, plaintiffs said.

VW shares lost up to 37 percent of their value in the days after authorities exposed illegal levels of pollution emitted from VW diesel cars.

"This lawsuit is solely and exclusively about whether Volkswagen complied with its disclosure obligations towards shareholders and the capital markets," the carmaker said in a statement. "We are confident that this is the case."