Late to the party, German carmakers join race against Tesla 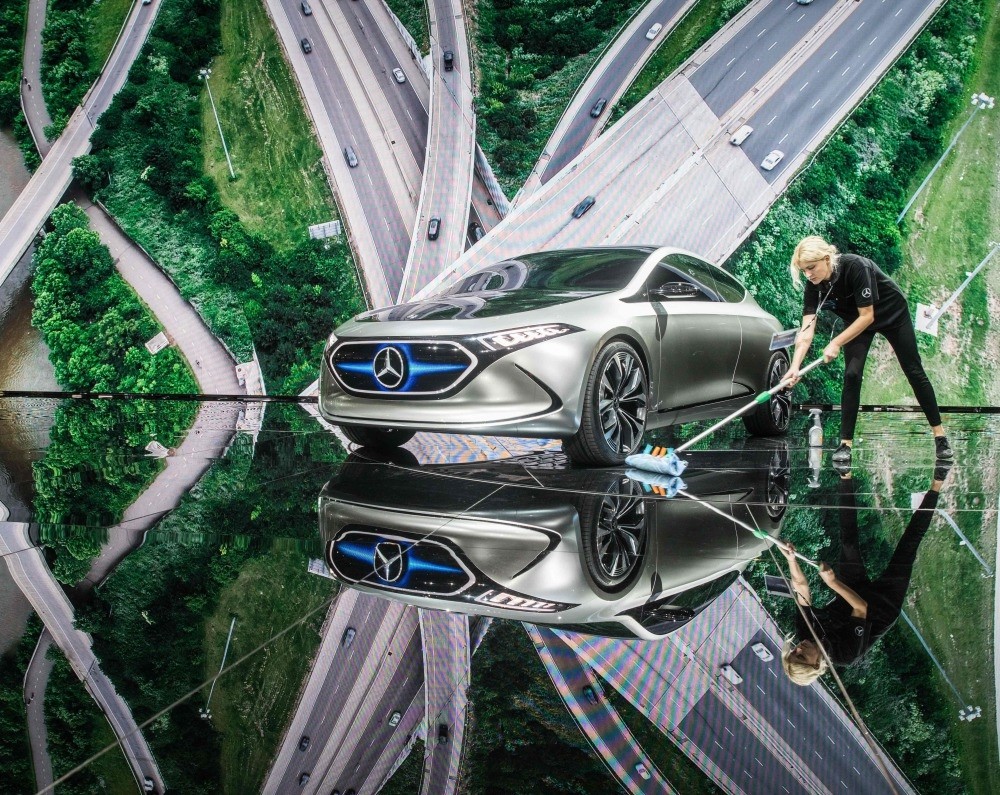 An employee cleans around electric concept car EQ A in Mercedes booth at the Internationale Automobil Ausstellung (IAA) auto show in Frankfurt am Main.
by Sep 25, 2018 12:00 am

After years of watching Tesla's electric cars speed ahead while they have been on the defensive over a diesel emissions scandal, German high-end manufacturers have finally unveiled their first challengers

German auto giants, Mercedes-Benz maker Daimler, BMW and Volkswagen's Audi and Porsche subsidiaries between them control some 80 percent of the worldwide premium car market. But until recently they offered little battery-powered, zero-emission competition to Tesla and its bombastic chief executive Elon Musk. That changed this month, with all three groups unveiling their first all-electric SUVs slated for release over the next two years.

Audi rolled out its "E-Tron," BMW its "iNext" and Mercedes its "EQC," while Porsche presented an electric coupe, the "Mission E."

In total, German carmakers have vowed a total of almost $46.7 billion of investment in battery-powered vehicles in the coming three years, industry association VDA says.

With a market share of around eight percent in Germany - compared with Tesla's 0.1 percent - Audi hopes electric cars will account for around one in three sales by 2025.

Time is pressing, as sales of engines powered by automakers' longtime growth driver diesel have plummeted in the face of plans by many large cities to ban them to bring down air pollution. The entrance of the three German behemoths into the electric race is far more consequential for Tesla than smaller fish like Britain's Jaguar, whose "I-PACE" is already on sale in the U.K. And the US tech firm faces major hurdles of its own, struggling to stem losses that have been going on for years while trying to reassure investors and customers of its chief executive's mental health. Musk was filmed drinking whisky and smoking cannabis (which is legal in California) with radio host Joe Rogan earlier this month, and in August revealed he was suffering from intense stress and fatigue in an interview with the New York Times. On Tuesday, Tesla confirmed that the U.S. Department of Justice was investigating the company over Musk's tweet announcing a plan to remove its shares from the stock market. Also on Twitter, the South African entrepreneur admitted Tuesday that after months spent overcoming "production hell" on the firm's mass-market Model 3, it was now in "delivery logistics hell" struggling to get cars to buyers - while promising "rapid progress."

For expert Dudenhoeffer, "Tesla is the market leader and has great strength in innovation, but the coming six to nine months will be a decisive test" for its chief executive.

"If he doesn't manage to stabilize the Model 3 and make the firm profitable, it will get very complicated for him, including with regard to his investors."

The German government hopes to see one million fully electric and hybrid vehicles on the road by 2022, up from fewer than 100,000 at the start of this year. But the spread of the technology is constrained by a number of factors, including a limited range of models for sale, slow expansion of charging infrastructure and limited capacity for building new batteries. A government commission on electric mobility recently found Germany would need to increase the number of charging points available more than five-fold to serve a million drivers. And while they are perfecting electric motors and other electric-drive components, German carmakers have so far balked at direct investment in costly battery production, aware that they would have to catch up on a head start enjoyed by Asian industry leaders and unwilling to gamble on an adventure in the unfamiliar territory of cell chemistry. The challenger for global battery leadership against the alliance of Japanese Panasonic and Tesla announced in July a mammoth new factory in central Germany to supply European customers.