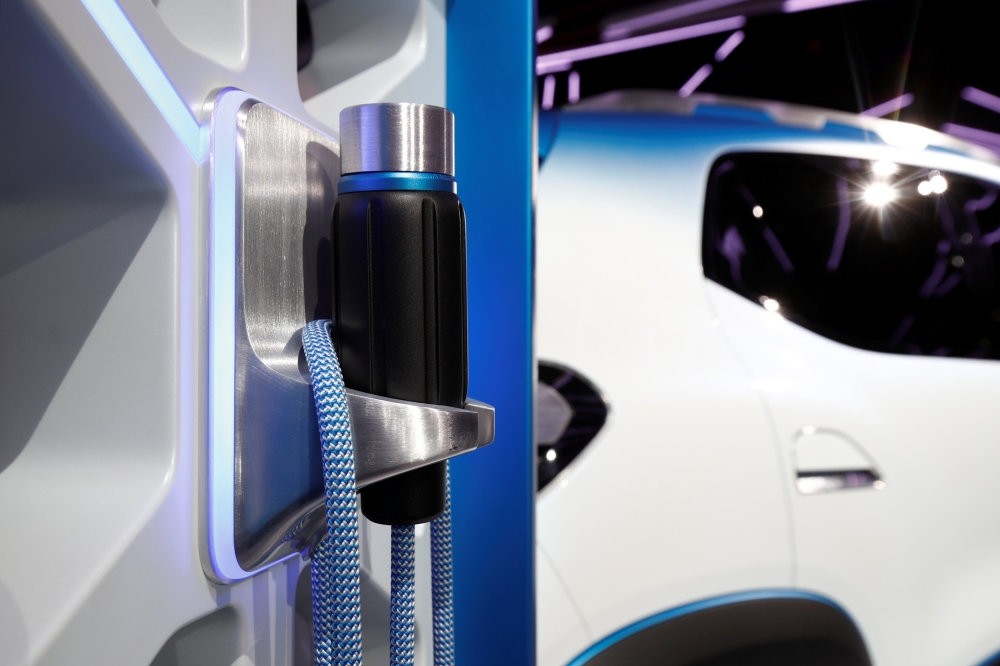 The charging plug of the electric show car Renault K-ZE, is pictured after its launch at the opening of the Paris auto show, Oct. 1.
by reuters
Oct 03, 2018 12:00 am

Battery models will erode profitability as they struggle to stay in the black. Concerns are mounting that the impact could be worse, as consumers resist paying more for electrified vehicles

Electric cars are poised to arrive en masse in European showrooms after years of hyped concept-car launches and billions in investment by automakers and suppliers. Now comes the hard part: selling them at a profit. Battery models making their car-show debut in Paris this week, from PSA Group's electric DS3 Crossback to the Mercedes EQC, will erode profitability as they struggle to stay in the black, executives generally acknowledge. But concerns are mounting that the impact could be worse, as consumers resist paying more for electrified vehicles - forcing carmakers to sell them at a bigger loss to meet emissions goals.

"What everyone needs to realise is that clean mobility is like organic food - it's more expensive," said Carlos Tavares, chief executive of Peugeot, Citroen and Opel manufacturer PSA. A Sept. 25 profit warning by BMW, blamed in part on electrification costs and tightening emissions rules, was "a first alarm signal", Tavares said in a weekend radio interview. "Either we accept paying more for clean mobility, or we put the European auto industry in jeopardy."

Underlining the turbulence facing automakers, British Prime Minister Theresa May will confront Conservative rebels demanding a harder Brexit stance at her party's annual conference, just as the Paris show got underway yesterday. On its second day, the European Parliament votes on plans to cut carbon dioxide car emissions by as much as 45 percent by 2030 from an average 95 grammes per kilometre in 2021 - a goal many automakers are already in danger of missing, on pain of fines running to hundreds of millions of euros.

Volkswagen has said the ID hatchback, due to open the brand's electric onslaught next year, will be priced close to conventionally powered versions of the Golf compact.

"VW is about to launch a load of electric vehicles at the same price as gasolines, and therefore at a loss," said Laurent Petizon, a managing director at consulting firm AlixPartners.

"Our interpretation is that the 2021 fines have already been factored into their sales strategy," he said. "Rather than pay penalties they prefer to lose money on vehicles and get the market going."

Volkswagen and Mercedes parent Daimler, which between them have announced 30 billion euros ($35 billion) in electrification investment, both warned last month that it would not be enough. They and other carmakers are also mandated to sell more electric cars in China and a group of U.S. states led by California. More than 200 electric and plug-in model launches are already scheduled globally over the next three years. Electric cars still cost 7,800 euros more to produce on average than conventional ones, AlixPartners calculates. Plug-in hybrids - which combine a smaller rechargeable battery with a combustion engine - overshoot by 5,000 euros. When that cost gap is reflected in the price, few are sold.

Mass-market electrics such as the Renault Zoe and Nissan Leaf have been on sale for most of the current decade, and heavily subsidized in Europe, while Tesla has made inroads into the premium business. Yet pure-electric cars claim just 1 percent of the market overall.

Carmakers are demanding increased public investment in recharging networks - which may yet awaken mass demand. Economies of scale should also bring some relief. But lithium-ion batteries, which claim 40 percent of an electric car's value, face global cobalt and nickel shortages that will pull the other way, inflating costs as production volumes rise.

Perhaps more critically, generous government sales subsidies are unlikely to survive much growth. In markets where incentives have been dropped, electric car sales have fallen.