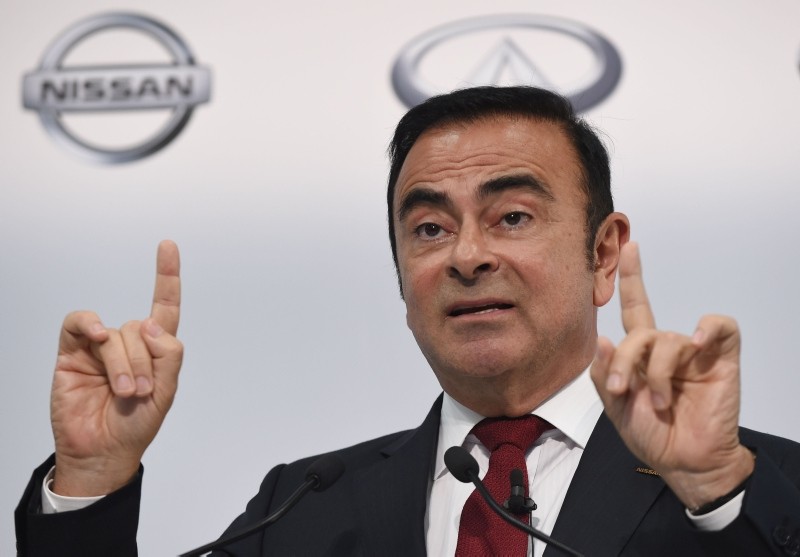 This file photo taken on May 13, 2015 shows Nissan Motors Chairman and CEO Carlos Ghosn speaking during the company's financial results press conference in Yokohama. (AFP Photo)
by Nov 19, 2018 12:00 am

Carlos Ghosn, head of the Renault-Nissan-Mitsubishi alliance, was arrested on suspicion of false income reports and financial misconduct, local media reported on Monday.

Nissan Motor said on Monday its internal investigations showed its chairman Carlos Ghosn had under-reported his income and had committed other misconduct.

Japan's second-largest carmaker said Ghosn and representative director Greg Kelly "have been reporting compensation amounts in the Tokyo Stock Exchange securities report that were less than the actual amount, in order to reduce the disclosed amount of Carlos Ghosn's compensation."

Nissan also said Ghosn's "numerous other significant acts of misconduct have been uncovered, such as personal use of company assets, and Kelly's deep involvement has also been confirmed."

The carmaker had conducted the internal investigation based on a whistle-blower for the past several months, it said.

Nissan will propose dismissing Ghosn as chairman at its board meeting, the company said.

"Nissan deeply apologizes for causing great concern to our shareholders and stakeholders. We will continue our work to identify our governance and compliance issues, and to take appropriate measures," the carmaker said.

The news was first reported by the Asahi Shimbun newspaper, which said it had "learnt that the Tokyo Prosecutor's Office asked Nissan Chairman Carlos Ghosn on the evening of the 19th to come in voluntarily on allegedly violating the Financial Instruments and Exchange Acts, as he is suspected of underreporting his salary."

Asahi said Ghosn is suspected of failing to report hundreds of millions of yen (millions of dollars) in income.

He was likely to face arrest after the questioning, the newspaper added. Other local media carried similar reports. The prosecutor's office declined to comment.

Public broadcaster NHK reported that Tokyo prosecutors were raiding Nissan's headquarters in the city of Yokohama.

Renault shares plunged more than 13 percent on the shock news.

"If he is arrested, it's going to rock the Renault-Nissan-Mitsubishi alliance as he is the keystone of the alliance," said Satoru Takada, an analyst at TIW, a Tokyo-based research and consulting firm.

"He is the man of charisma for the alliance. It is likely to have a negative impact on its brand image," he told AFP.

Renault came to the rescue of the then-ailing Japanese automaker in 1999 and parachuted in Ghosn, who set about slashing costs and jobs in a huge corporate overhaul.

In 2016, Ghosn also took charge at troubled Mitsubishi after Nissan threw it a lifeline, buying a one-third stake for about $2.2 billion as it wrestled with a mileage-cheating scandal that hammered sales.

For the past two decades, Ghosn has maintained an unusually high profile in a nation where foreign chief executives of major Japanese companies are still relatively rare. He is known as a major advocate of the country's auto sector.

Ghosn has appeared on magazine covers dressed in kimono, vowing to renew the Nissan brand. He was widely praised in Japanese industry circles for delivering sorely needed cost cuts and introducing greater efficiency at a time when Nissan needed a fresh start.

The Nissan-Renault-Mitsubishi group is among the biggest auto alliances in the world, selling about 10 million vehicles a year. Before joining Renault, Ghosn worked for Michelin North America.