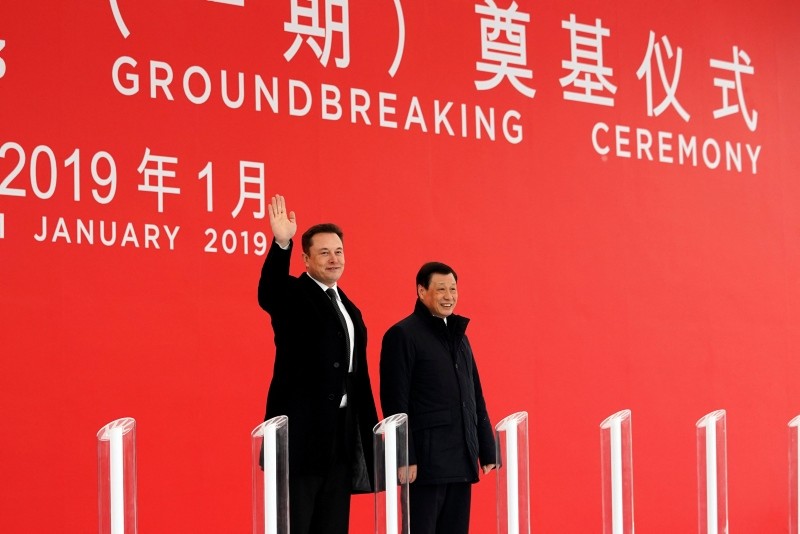 Tesla broke ground on Monday for its Shanghai Gigafactory where it plans to begin making its Model 3 electric vehicles (EV) by year-end, a first step in localizing production in the world's largest auto market.

At a ceremony at the site of the plant on the outskirts of Shanghai, Chief Executive Elon Musk joined the city's mayor and other local government officials to formally begin construction of a factory that Tesla has said will cost around $2 billion.

"We think with the resources here we can build the Shanghai Gigafactory in record time and we're looking forward to hopefully having some initial production of the Model 3 towards the end of this year and achieving volume production next year," Musk said at the event.

Tesla announced plans in July to build its first factory outside the United States in China, the biggest electric vehicle market, despite trade tension between Beijing and Washington. That followed Beijing's announcement it would end restrictions this year on foreign ownership of electric vehicle producers in an effort to spur industry development.

The Shanghai factory will produce "affordable versions of 3/Y for greater China," Musk said. The company refers to a planned crossover that has yet to receive a formal name as the Y.

Higher-priced models will be built in the United States for export to China, Musk said.

Tesla, based on Palo Alto, California, global automakers including General Motors Co., Volkswagen AG and Nissan Motor Corp. that are pouring billions of dollars into manufacturing electric vehicles in China.

Local production would eliminate risks from tariffs and other import controls. It would help Tesla develop parts suppliers to support service and make its vehicles more appealing to mainstream Chinese buyers.

Tesla said in October it had signed an agreement for a 210-acre (84-hectare) site in the Lingang district in southeastern Shanghai.

Shanghai is a center of China's auto industry and home to state-owned Shanghai Automotive Industries Corp., the main local manufacturer for GM and VW.

Tesla has yet to give a price tag but the Shanghai government said it would be the biggest foreign investment there to date.

The company faces competition from Chinese brands including BYD Auto and BAIC Group that already sell tens of thousands of hybrid and pure-electric sedans and SUVs annually.

Until now, foreign automakers that wanted to manufacture in China were required to work through state-owned partners. Foreign brands balked at bringing electric vehicle technology into China to avoid having to share it with potential competitors.

The first of the new electric models being developed by global automakers to hit the market, Nissan's Sylphy Zero Emission, began rolling off a production line in southern China in August.

Lower-priced electric models from GM, Volkswagen and other global brands are due to hit the market starting this year, well before Tesla is up and running in Shanghai.