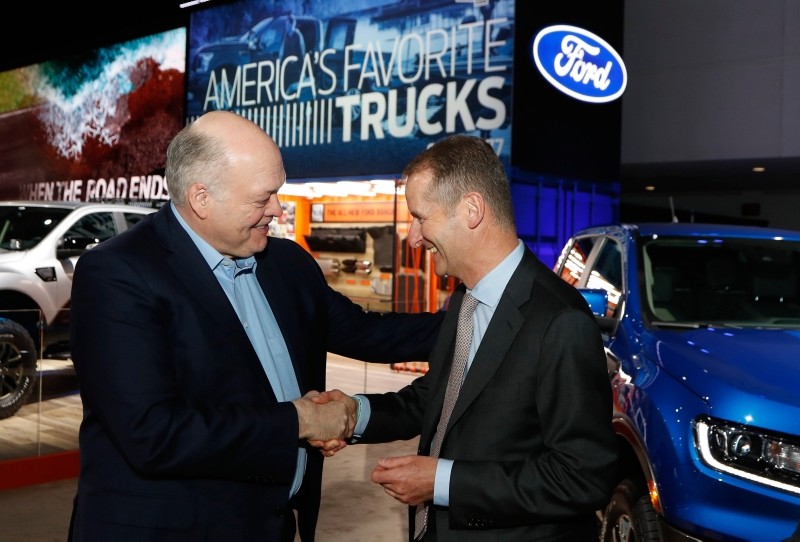 Volkswagen and Ford announced a long-rumored alliance on Tuesday to jointly develop commercial vans and pickups starting in 2022, in a bid to reduce costs in the increasingly competitive auto market.

The announcement came after more than six months of talks between the automakers which also included discussions about cooperation on autonomous and electrification technologies for cars of the future.

The American and German giants will join forces to develop commercial vans and medium-sized pickups as early as 2022 and that the linkup would offer efficiencies that would mean stronger profits starting 2023. But the deal does not involve cross-ownership, according to a joint statement.

The companies also will "investigate collaboration on autonomous vehicles, mobility services and electric vehicles and have started to explore those opportunities."

VW CEO Herbert Diess said the alliance "will be a cornerstone for our drive to improve competitiveness."

Under the alliance, to be governed by a joint committee headed by the chief executives of the two companies, Ford Motor Co., based in Dearborn, Michigan, will engineer and build medium-sized commercial pickups for both firms. Ford also will build large commercial vans for European customers and VW will develop a city van for crowded cities. Cooperation on development lets carmakers spread their costs over more vehicles, lowering their costs per vehicle.

The city van would be designed for the European market, while the medium-sized pickup truck would be specific to South America, Africa and Europe, Ford said.

Diess said building vans in Ford plants in Turkey is an option. Located in northwestern Kocaeli province, Gölcük and Yeniköy plants in of Ford Otosan, the U.S. carmaker's Turkish venture, are the main production hubs of the Ford Transit and Ford Tourneo light commercial vehicles in Europe. The company also has a truck and engine factory in Inönü district of central Eskişehir province.

The alliance follows in the footsteps of others formed in the auto industry, which is facing rising costs, amid the drive to develop new technologies, as well as changing consumer preferences.

Honda in October invested $2.5 billion in Cruise, GM's proprietary technology subsidiary, in exchange for a 5.7 percent stake. And Toyota and Mazda plan to open a joint factory in the southern U.S. city of Huntsville, Alabama in 2021.

Carmakers are facing the need to invest billions in new technologies. They are under pressure from governments in key markets such as the European Union and China to come up with electric vehicles so they can meet tougher pollution limits. And they are racing with tech companies such as Waymo and Uber to develop autonomous vehicles and to find ways to offer temporary use of an auto as a service through smartphone apps.

At the same time, a slowing global economy is putting pressure on profits and underlining the need to control costs. Ford last week announced a shakeup of its European operations that will mean dropping less profitable vehicle lines.

Hackett said the alliance "will not only drive significant efficiencies and help both companies improve their fitness, but also gives us the opportunity to collaborate on shaping the next era of mobility." He said in a conference call with reporters that the rush of new technologies is broad and "moving at the speed of light."

"The industry likely will see more kinds of collaboration like the one announced today by Ford and VW," said industry analyst Michelle Krebs of Autotrader.

"A single automaker can't be all things to all customers around the globe as vehicle and technology development become increasingly more expensive."

Jessica Caldwell, executive director of industry analysis at car shopping website Edmunds, said that the success of the partnership "could ultimately determine the long-term fate of two of the world's most iconic brands."

"Automakers aren't just competing with each other anymore, they're under intense pressure from well-funded tech companies who are eager to get in on the future of mobility," she said. "Cutting costs by sharing vehicle architectures and manufacturing facilities is just table stakes in this new world, and is a nice place to start. However, the key to success will be if Ford and VW can help each other fend off the upstarts and become leading forces in electric and autonomous vehicle technology."

Volkswagen CEO Diess said that while Volkswagen is generally highly competitive it lacks volume in light trucks and midsize pickups. "Sharing platforms and parts with Ford provides very competitive scale effects in this segment - with the effect that jointly we will become number 1 in this area," he said in a statement.

Diess said Volkswagen would use the Ford platform for the successor to its current Amarok medium-sized pickup, to be sold in Latin America, Europe, South Africa and potentially in the U.S.

Cooperating with an American company also makes sense for Volkswagen - which is based in Wolfsburg, Germany, and owns the Volkswagen, Porsche, Audi, Skoda and other brands - because the regulatory conditions for preparing the start of widespread autonomous driving are more advanced in the U.S. than in Europe.

He and Hackett said both brands would keep separate identities and be sold through their own dealer networks. Hackett said the companies would ensure that the vehicles have different driving dynamics and driver interfaces in line with their own brand images.

In a conference call with reporters and investment analysts, the chief executives of VW and Ford said they were determined to continue talks on expanding the collaboration further to include new technologies and additional vehicle programs.

"How, where and when this might happen, this is what we are currently negotiating with our colleagues at Ford," Diess said in prepared remarks.

Among the discussions, was a potential collaboration in China on electric drivetrains.

It was the second major announcement for Volkswagen, which on Monday unveiled an $800 million investment to expand its plant in Chattanooga, Tennessee to build electric vehicles.

That move won the praises from U.S. President Donald Trump, who tweeted Tuesday morning: "Congratulations to Chattanooga and Tennessee on a job well done. A big win!"

VW made its announcement at the Detroit auto show Monday, as the U.S.'s premiere industry invent got under way. The automaker said it would create 1,000 new manufacturing jobs.

The two automakers were scheduled for a joint appearance at the auto show Tuesday morning to announce their alliance, but abruptly canceled, choosing to release a statement and hold a conference call instead.

"We don't have enough details yet to go out in front of more than 500 journalists, so we decided to call it off," Ford spokesman Mark Truby told AFP on Monday evening.

Trump, who campaigned on a promise to increase U.S. manufacturing jobs, has regularly commented on production decisions by automakers.

In November, he blasted General Motors' decision to idle several plants and cut 14,000 jobs as part of a major restructuring, calling it "unacceptable" and "nasty."